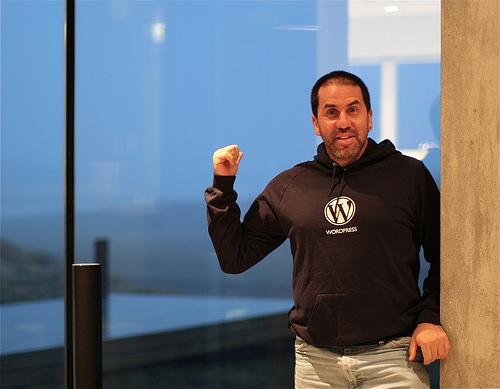 Last week Jess Reingold reached out to us at Reclaim about some issues with UMW Blogs (she’s not dead yet!). The “Older Posts” and “Newer Posts” links at the bottom of the main blog pages (not individual posts) were gone. That’s a new one for me, and given I have spent a lot of time troubleshooting WordPress for more than a decade I was confident it was either a theme or a plugin issue. After a quick theme test to see if it was theme related, it became apparent it was across all themes on all blogs, which pretty much narrowed it down to plugins. Easy enough, I waited until early Thursday morning (living in the future a definite bonus when playing a sysadmin on TV) to grab a snapshot of the site  before starting to test my plugin theory.  I turned off plugins: nada. I then turned off mu-plugins: nada. I then turned off mu-plugins and plugins: nada². What was a simple fix was now starting to seem like anything but, we replaced the main WordPress files given it started to smell like a core file problem: nada. WTF!

Friday was a beast of a day at Reclaim, one of those it rains it pours days with server issues and hacked sites, so I had to put off further testing until early Saturday morning. In the interim Jess reported back that the posts in the Dashboard where not all listing. So, when you go to get a list of posts, it breaks after 5 with no pagination. So, another pagination problem, which seemed connected, and as Tim noted, points to a database issue. Ugh. Saturday morning I took another snapshot and went through all the steps again just to be certain (turning off plugins, various themes, etc.). I then fixed permissions across the site, and even prayed a couple of Rosaries to avoid having to dig into SQL commands in terminal. Nothing doing. So,  I then turned towards checking, analyzing, and repairing any corrupted database tables. As my luck would have it, there were none to be found. As I told  Tom Woodward Monday morning in a back channel seeking help with this issue, “I am beginning to question everything” 🙂

So, I did the responsible thing and described my problem in detail and posted it to the WordPress.org Forum.  It went something like this:

I have an odd issue that has been giving me agita all weekend. The issue is that the “Older Posts” link usually at the bottom of every blog’s frontpage across the WPMS is missing. I tried replacing core files, turning off all plugins (including mu-plugins and network activated plugins), as well as turning off and toggling through various themes. None of this worked.I turned on debugging and have been looking at the log, but nothing obvious jumps out at me.

To make matters worse, a separate (but possibly related issue?) issue cropped up at the same time. I can only view 5 posts in the Posts area of the Dashboard, after that it stops and there is again no pagination. This is not the case with the Pages area of the dashboard, mind you. It is pretty strange, and not sure if the two are related, but figured it may mean something to someone.

I searched the web, asked my local network, and now turn to the oracles of the WordPress forums. Folks did suggest the second issue may be database related given it is in the dashboard, so I checked and repaired the global database for this WPMS, but nothing seems to have changed.

Not sure if anyone here has come across a similar issue and has some recommendations, but at this point I would appreciate just about anything, even if just commiseration—misery love virtual company.

Damn, I am eloquent and engaging.  WHAT A VOICE! Anyway, I then linked that Forum post on Twitter to bump it a bit, and within minutes the great Ron Rennick asked if I had updated the SharDB plugin on that site.

Are you using SharDB? Have the latest version?

I have known Ron for a pretty long time now, and he has bailed me out of one issue after another with as much graciousness as one would think humanly possible. He might be the biggest reason Stephen Downes forgot about why everyone loves Canada so much. My inclination was to go to Ron first, but when you go to a well so many times you wonder if you left any water in it, but as I soon found over Ron’s cup runneth over with generosity. within minutes he solved my issue.  I updated the latest version of SharDB db-settings.php and db.php and the problem was fixed. So good.

How did I miss this? To borrow from my discussion with Tom Woodward again, db-settings.php is in the root folder and db.php is in wp-content, but “naked in the nether realm of wp-content” —it is easy to overlook plugins like that. And while I did consider SharDB as a potential issue, I immediately ruled it out given the plugin page says it hasn’t been updated for over 3 years. Stupidly, I did not look at the development page, if I had I would have caught there have been bug fixes for just this issue:

It was funny, because in the few minutes after writing the forum post and Ron pointing out my issue, I sent a note to Jess explaining why it was still not fixed, and the idea was floated that UMW Blogs may be approaching retirement. UMW Blogs and I have a long history, and I am not entirely objective about it, to say the least, but I was beginning to wonder if she wasn’t right. That said, I likened UMW Blogs to the Millennium Falcon noting she may have one more jump to light speed. Soon after that, Chewbacca growled and Ron heard the cry! When I reported back that we had once again avoided the LMS’s imperial tractor beam, she just sent this 🙂

So, after all that it was a plugin issue. So in some ways I was right, but simply being right didn’t solve my issue because usually things are more complicated than that. There is a history to any given problem that often takes many people to solve. In that regard, it never fails to amaze me who quickly things get fixed once I climb out of my head and share it with others. The social web is not social media, it’s us—and we are not dead yet.