On Approaching the Web 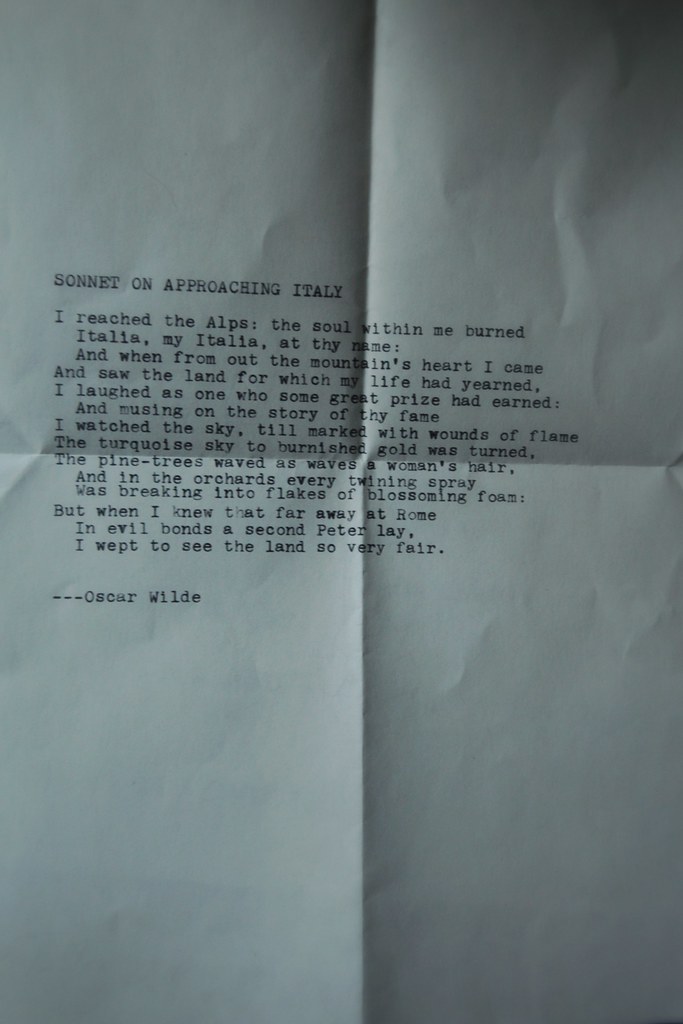 After arriving home from two weeks on the road in the U.K., I found a letter on my desk. When I opened it up I discovered the above photographed Sonnet by Oscar Wilde. He wrote  “Sonnect on Approaching Italy” in 1877 upon entering Italy on his way to Rome to spend Easter.* The poem beautifully captures the spell I’ve been under for the last 8 months. I can truly understand how blown away Wilde must have felt when he was passing through the Italian Alps 140 years ago, and I don’t think they’ve gotten any less stunning since.

What strikes me most of all about this gift from abroad is not only the fact that Chris Lott (purveyor of the brilliant Katexic newsletter) took the time and energy to type out this gem and send it over 5,000 miles to my doorstep, but how perfectly it captures how I’m feeling right now. I’m going to frame this poem and hang it on my office wall. Not only as a momento of one of the happiest times of my life, but also as a constant reminder that at its best the web is made of of really smart, thoughtful, and deeply caring people that want to share the best elements of humanity with one another. The generative web! Thanks Chris, this was really special!

*The line “In evils bonds a second peter lay” was cryptic for me, so I looked it up. Turns out Pope Pius IX was “imprisoned” in the Vatican because he would not recognize the united kingdom of Italy that was formed in 1870, effectively nullifying the Papal States he ruled over as Sovereign.