OpenEmu, RetroPie, c128d, and more cables than you can shake a stick at

Update: Thanks to Tim’s comment I was able to find a solution that will actually work and is significantly cheaper for capturing the Retropie output on the Mac for streaming.

I am quickly realizing why ds106radio and ds106tv is good for me, it pushes me to go down rabbit holes I never even dreamed existed. So, I’ll use this post as a way to collect some of my links and learning thus far to try and capture the road that got me here as the trees of memory already begin to blur the path. I figure I might need something to reference 10 years from now when I decide to get into classic game emulation yet again 🙂 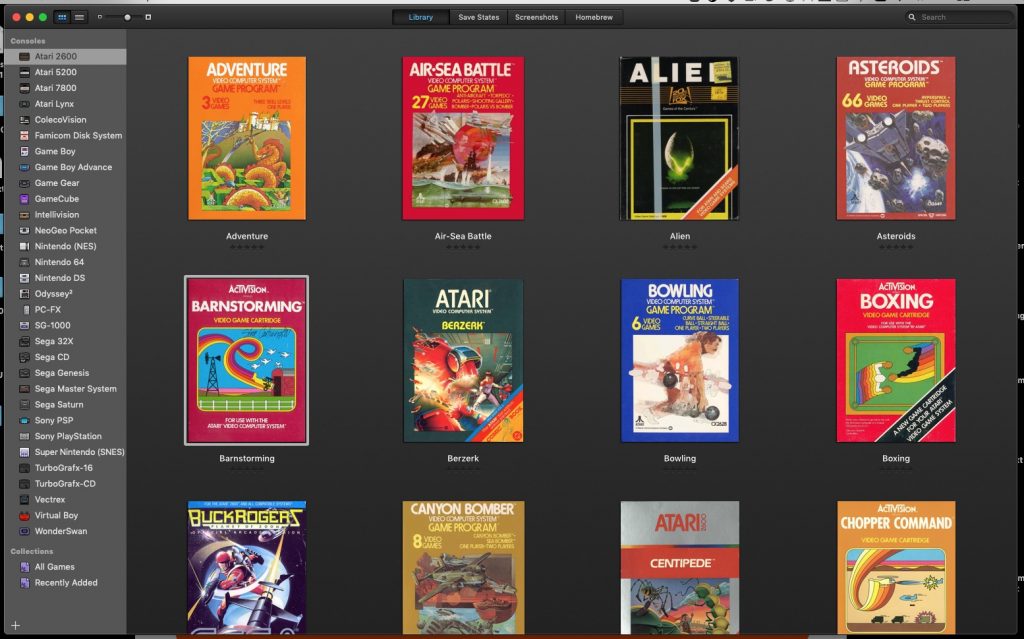 The discovery of OpenEMU was born of my small experiments on ds106.tv to create a living room like space wherein I play some old school Atari 2600 games on the Atari Flashback I picked up at Christmas a few years back. It was a quick way to test if I could use the Elgato video capture card I had purchased for archiving VHS tapes to bring in the card as an input for OBS on ds106tv. It worked, I could pull in the Atari Flashback and both play and stream it fullscreen from a second monitor. It was fun, and while there are some good games on the Flashback—Adventure, Asteroids, Haunted House, etc.—I quickly wanted access to a number of other Atari games I had as a kid (not to mention the 150+ we have at Reclaim Video in Freddy). This led me to digging up a bunch of roms I had for the z26 Atari emulator on an old storage disk. I found them and then went on a search for the best emulator out there now, and that is how I discovered OpenEMU. It’s nice because I can emulate just about any game on any old school console. I think Atari 5200 is next for me 🙂 If you are interested, this guide was quite useful in getting me up and running with openEMU: “Running the MAME Arcade Emulator on Mac OSX.” 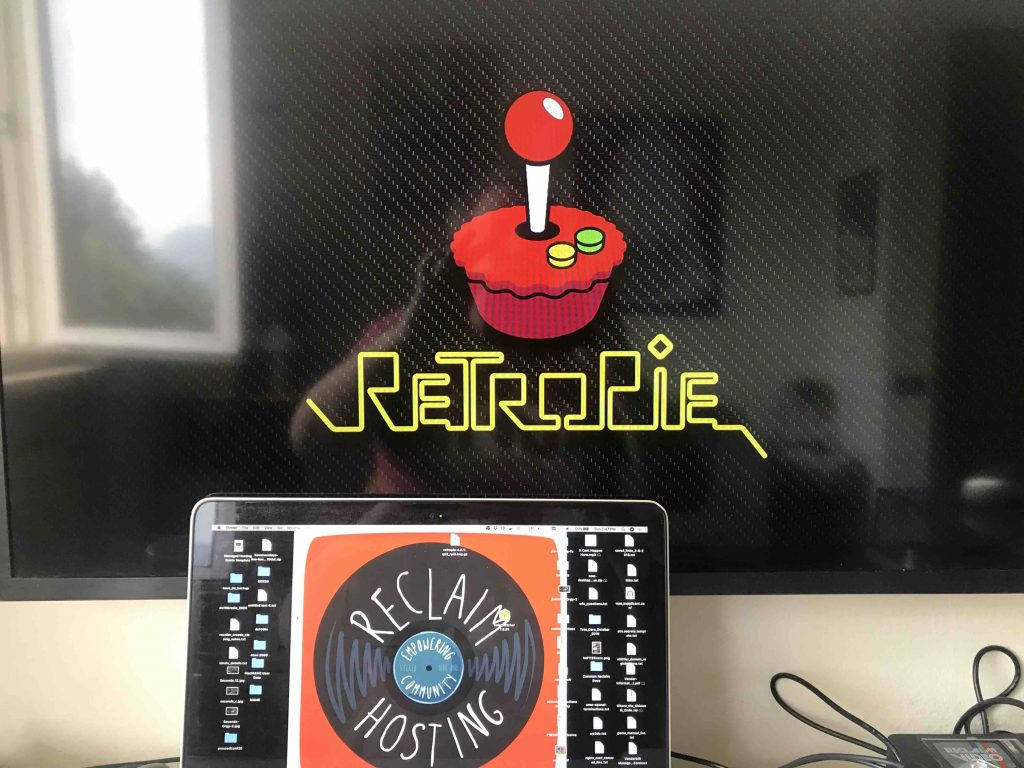 But there was one issue with OpenEMU, at least for the Mac, that led me down the RetroPie path: MAME roms (or the classic arcade games that Reclaim Arcade is all about) were not stable. This meant I needed another option, and while I played with a couple of Mac options like ChoccyHobnob, I knew they wouldn’t work for me because I wanted to run MAME in a separate window and these options were all command line which took over my screen when played.  There may be a command for forcing MAME to open in a window on the Mac, but I haven’t found it yet. What’s more, streaming from a window on OBS does a number on frame rates. During my searches I saw that several folks were running something called RetroPie for MAME, and given I have a Raspberry Pi 3, Model B+ hanging around I decided to take a left turn at Albuquerque and get that up and running on Saturday. 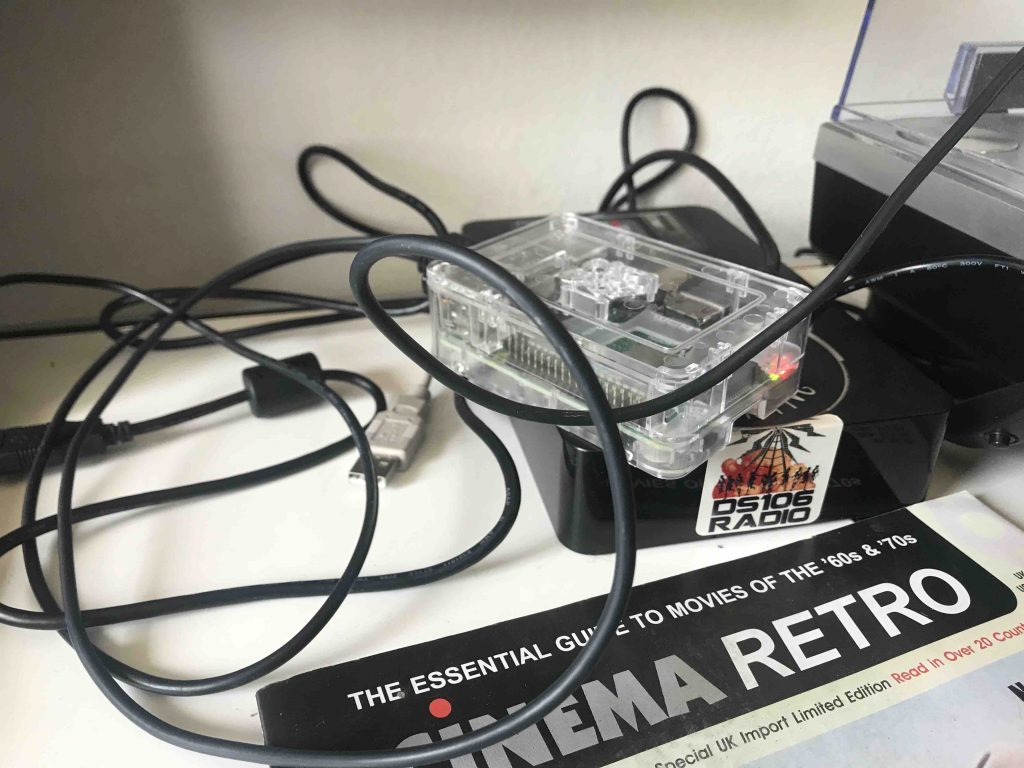 I was thrilled that it worked, but the itch I was trying to scratch was still eluding me. I had the Raspberry Pi loading RetroPie cleanly, and not only to my MAME roms work cleanly, but I could also play my Atari 2600 roms given RetroPie can emulate numerous systems,* much like OpenEMU. But I still wanted to get those classic arcade games through MAME into my Macbook Pro as an input so I can stream the gameplay for ds106tv. Using your 2015 Macbook Pro as a monitor for a Raspberry is not that easy, the HDMI cable is output only. I explored the VNC screen sharing option (as well the the TightVNCserver option)  in tandem with the VNC Viewer for the Mac, but turns out that audio does not work which was a dealbreaker for me. So, I have RetroPie running, and it is slick, but the final piece will be getting   an HDMI to RCA covertor so that I can bring it into my Macbook Pro using the Elgato video capture card and play the classics fullscreen on my second monitor for streaming to ds106tv. Can you dig it? I knew that you could. 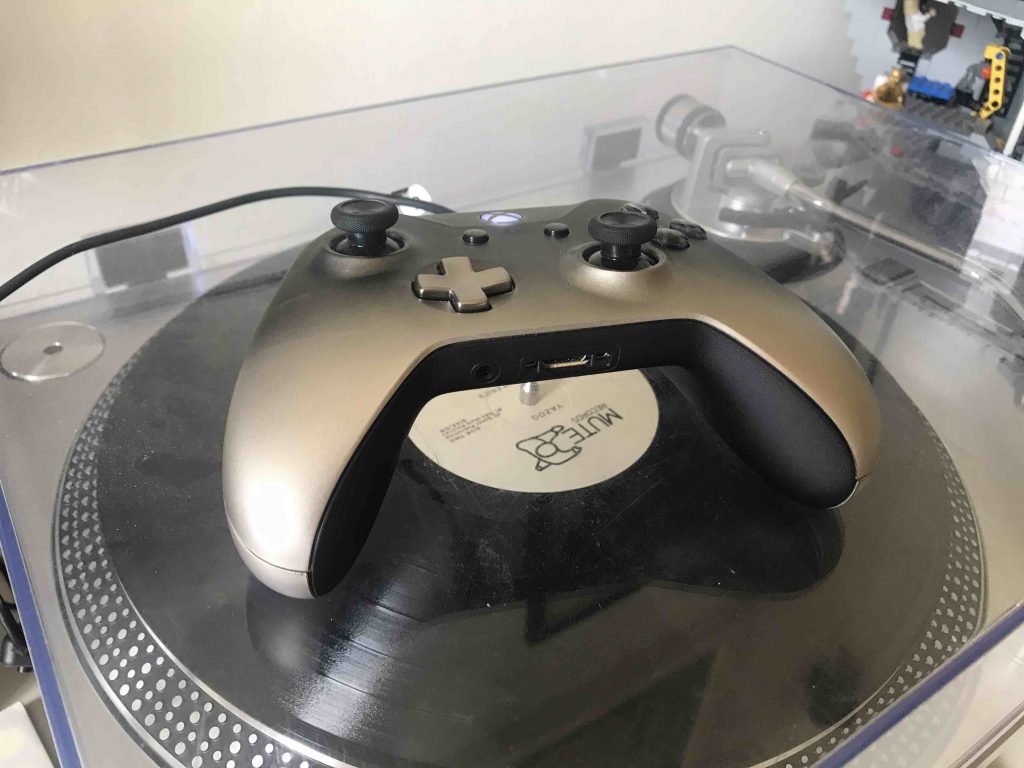 So, more on the MAME/RetroPie front, but the big win on this machine is having my Xbox game controller hooked up to the Pi so that it controls everything, no need for a keyboard or mouse after the initial setup, and this video was a great play-by-play of the installation process:

Finally, I returned to another project I spent several hours on earlier in the week, namely trying to figure out what I needed to use the Elgato video capture card to get the video and sound from a real, live Commodore 128d (a.k.a. the c128d) pulled into my Mac so that I could stream the gameplay. I have a ton of games for the c128d (almost all played in the C64 mode of that system) and they’re a total blast to play and the graphics age quite well. Commodore 64 gaming is a world unto itself, and I thought pulling some of that into the ds106tv stream would be a lot of fun but hit an early snag with the video signal. The C128d has an 8-pin DIN video output, and I have what turns out to be a 5-pin DIN, and I found the following diagram on this forum thread that I believe explains why the video signal from the c128d is not working with the Elgato capture card: 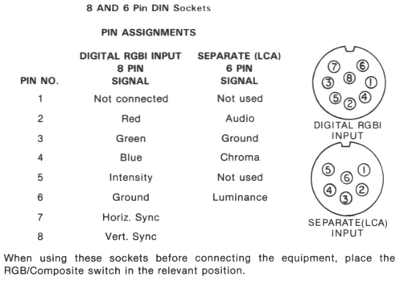 The 5-pin DIN does not have horizontal, vertical, and ground (pins 6,7 and 8 listed above), which I believe is why the c128d video coming in was a mess of lines. Hoping this will be easily fixed with an 8-pin DIN, but I even went a step further in my exuberance this weekend 🙂 I picked up an 8-pin DIN convertor to S-video and component RCA. Behold! 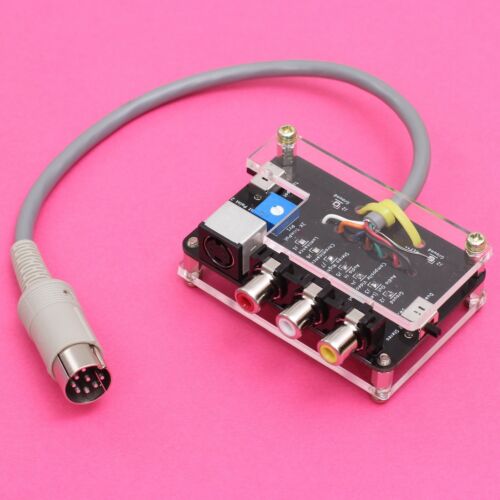 I love this kind of stuff, and I bought a few similar retro adapters for the c128d a few years back. The blog tells no lies! I got this from Australia yesterday and it is already on its way! So fired up. This reminded me that I should also get a s-video cable (male-2-male) and a couple of male2-male RCA component cables given I don’t have any (everything in Italy is S-cart, which always throws me for a loop). 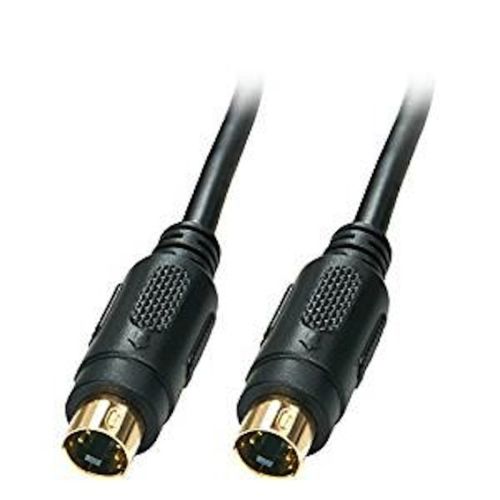 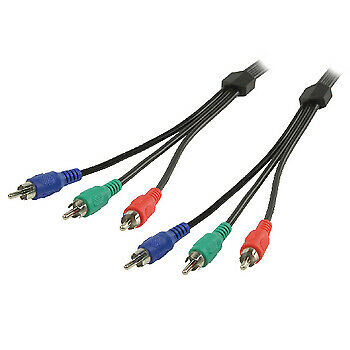 In my readings on the c128d video and monitor output possibilities I learned I could also try the RGBI output, which is 9-pins, and use a 9-pin RGBI male output and convert that to a 15-pin male VGA that could then be converted to a RCA component output through a VGA female adapter. 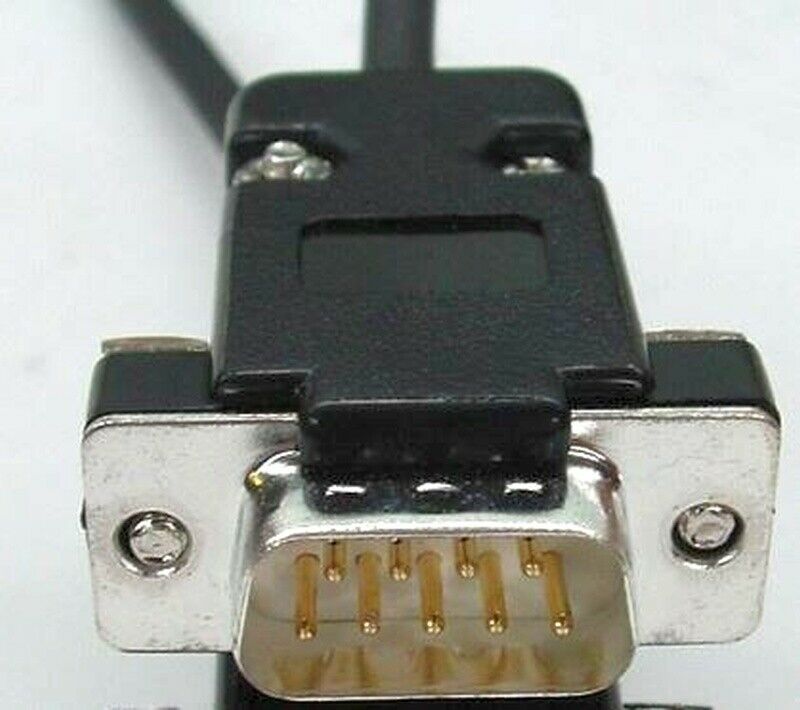 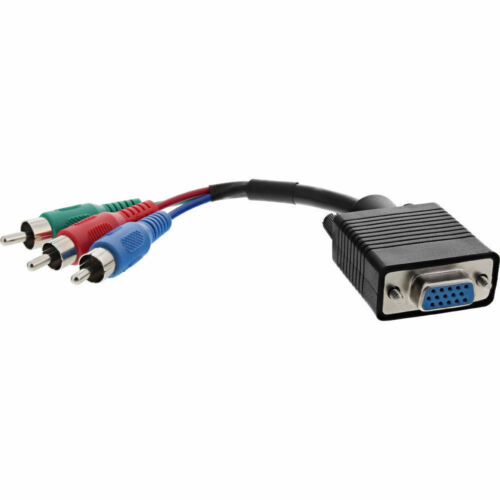 So, that’s where I am right now, I have bought more O.G. cables than anyone in that right mind ever would, but I am looking forward to having the retro game streaming kit up and running over the next few weeks. It’s a welcome diversion, and I always learn a ton about the various intricacies of the long history of video adapters and the regional differences within that history that make it feel almost like cultural arcana, especially as many of those adapters have begun to unify around USB then HDMI and now USB C. Although that could be an over-simplification given the various forms of USB I am conflating here. But, nothing like a 5-pin versus an 8-pin DIN to make all our current cable adapter issues seem quaint.

*It even emulates Amiga which I want to explore in more depth.

2 Responses to OpenEmu, RetroPie, c128d, and more cables than you can shake a stick at