I dig what Natalie Lafferty and Pat Lockley dreamed up with PressEd, a conference about WordPress run through Twitter. It provides a fresh take on the online conference, and with that somewhat of a challenge to use the medium in an interesting, thoughtful way to get your point across. I was asked to give a featured talk, alongside Professors Gurminder K Bhambra and Mark Carrigan, which immediately puts me outside my academic depth. Add to that a whole new approach to a keynote, and I’m feeling the pressure—which I kinda like. 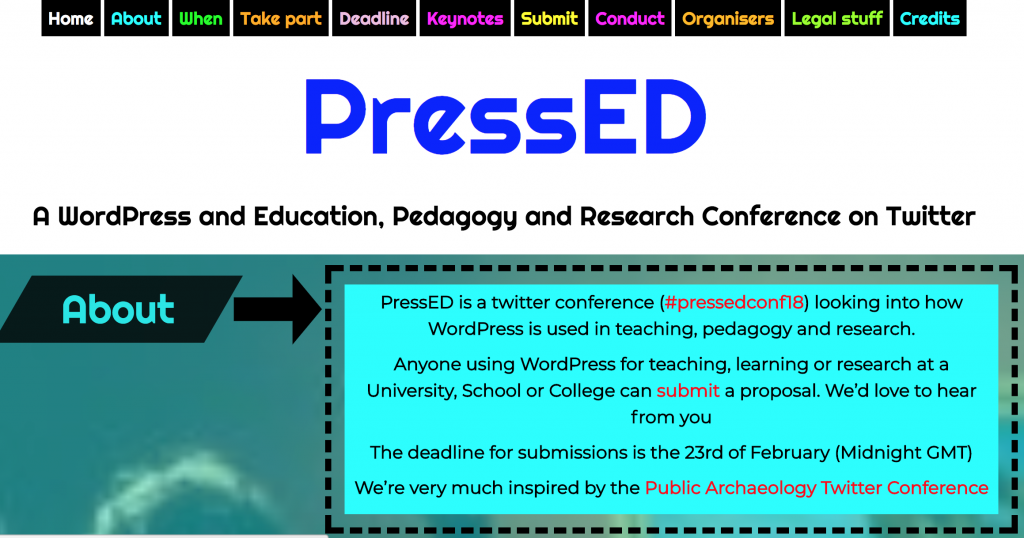 So I’ll use this post to try and get at two questions: 1) what should I talk about? and 2) how should I say it?

So, it’s a conference about using WordPress for teaching, pedagogy and research and I have some experience with that. I’ve been proselytizing WordPress in higher ed since 2005, and it quickly became the basis of my career from starting this blog in 2005 to UMW Blogs to ds106 to Domain of One’s Own to Reclaim Hosting. WordPress is present in just about everything I have been part of. And while cPanel was the environment through which I began to understand the inner working of the web, it was with WordPress that I was able to start creating and sharing on it easily. That was always the hook, WordPress made publishing on the web simple and attractive. I was totally sold, and that made it easy to try and sell others. In 2006 and 2007 when we were pushing WordPress heavily at UMW for personal sites, course sites, and even the university website people thought it was cute—it’s good for “blogs” if you are into cat diaries and bad politics.

Twelve years later it powers 1/3 of the websites on the internet. At UMW we trained faculty, students, and staff for more than a decade on how to use a web-based publishing tool that they were likely to use again in their personal and professional life. That is satisfying. And in 2010, when UMW decided to run its website on WordPress, there was a certain amount of vindication for that ragtag bunch of IT/academic hybrid outcasts ostensibly specializing in fixing printers. Watching WordPress steadily conquer the web has been a trip because what was a righteous cause for the first part of my career eventually became like oxygen, I stopped thinking about it and just involuntarily assumed everyone else needed WordPress to survive online. There were some exceptions, but iron lung social media sites like Twitter and Facebook don’t really count—you are not really breathing the fresh air of the open web there, you are more akin to Darth Vader sucking wind through the empire’s algorithm 🙂

So I think that’s part of what I want to talk about, but it needs example and it needs to be interesting. What’s more, it is through the empire’s iron lung, so you need to tell it slant, so to speak. How do you give a talk like this through Twitter? Is it just a headline-like tweet with a link to a cool example/resource? Maybe, but that seems too easy. It would be cool to see the keynote as an interactive sharing from a wide range of folks of their WordPress story. How and why are they using WordPress for teaching, learning, and research?

What if the presentation became a call for folks to share links to their sites/projects and provide some tweet-length contexts. How did they come to WordPress for their academic work? Why do they use it? But doing this during the presentation is tricky because it could always fall flat. What if no one plays along? I could make an open call for examples well before the conference in order to collect examples and create an ongoing resource, while still spinning my presentation narrative around them. That’s very much in the spirit of Alan Levine’s presentations like Amazing Stories of Openness. We could call it “Amazing Stories of WordPress,” and let folks narrate their tales of how they use WordPress. They would have to be short videos/posts with tweet-friendly descriptions, but that is very doable and would personalize the examples in ways I never could. What’s more it would highlight a community of people doing stuff rather than allowing me to fall into the same trappings of talking myopically about the work I’ve done (which you can see from what I wrote above is very real danger).

I could also steal Tom Woodward’s model and talk about all the thing you can’t do with WordPress, only to demonstrate that you probably can.  This reinforces my early experience slinging WordPress, and it would be satisfying to count the ways.

But I have to assume both Alan and Tom will be submitting for this, so I may have to get original …. dammit.

So, a bit more amorphously, I could try and recruit a bunch of folks who have been working with WordPress and plan some kind of happening during the conference to  suggest all of this through a medium that is premised on distraction. A keynote of distraction, I don’t know what that means, but I kind of like it. Anyway, that’s all I have now on this idea, but the post served its post so far in getting me to this point. I’ll be trying to wrestle my way through this in the next week or so because I need to come up with something soon given I feel a bit out of my element with this one. And as always, any and all feedback and ideas to help me flesh this out would be most welcome!