Sometimes They Come Back

The other day I got a comment on a post from 2007 about teaching Foucault’s Discipline and Punish. It’s over a decade old at this point, and it’s interesting to me because it marks a moment when I was knee deep in getting WordPress Multiuser running for all of UMW—what would three short months later be the roll out of UMW Blogs. This class was an early experiment with teaching on top of WordPress for me, and it was a lot of fun. I enjoy teaching early American literature courses tremendously (though it has been a long while, this may have been my last), and this was effectively a graduate level course focused on crime narratives from the 17th and 18th centuries that I unleashed on unwitting UMW undergrads. The class in particular I blogged about shared an assignment wherein I had students take the first 20-30 minutes of class and frame their idea of the first chapter of Discipline and Punish collectively, then map it on the board. 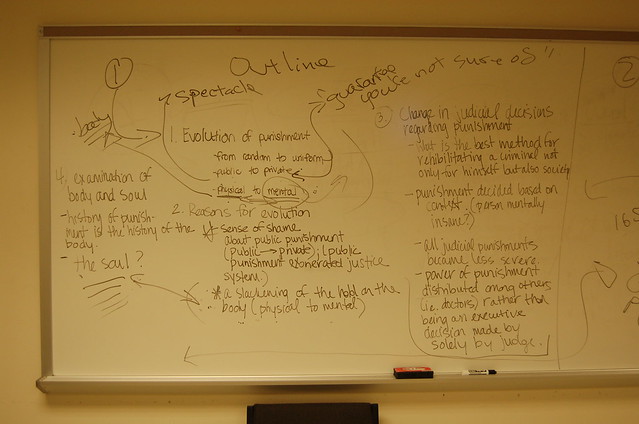 [At this point during the writing of this post I lost a couple of hours to finding out why the Faculty Academy site (which I discovered was broken thanks to a link in my 2007 post) was not resolving. That’s now fixed, more on that anon 🙂 ]

The exercise built on their regularly blogged reflections on the reading, and it went pretty well. In fact, I was excited enough to blog about it in a fairly self-satisfied manner. What I probably did not expect at the time was that ten years later other folks teaching Discipline and Punish would find and use this post as an inspiration for their own course. That’s pretty cool. Last summer, Sam H. commented on the post that he had experimented with this approach and had some success:

I just used a modified version of this format to teach selections from Discipline and Punish, and it was amazing! Rather than ask my students to outline the argument, I asked them to (1) conceptualize disciplinary power, (2) describe the panopticon and explain it’s significance to Foucault’s argument, and (3) conceptualize docile bodies. I was planning to leave the room, but I chickened out (**what if they all just left?!**), and ended up pacing around the room reading my copy of the text as my students worked their way through their own. I had them work in groups of 5-6 rather than as a class and it was so fun listening to them read passages to one another and try to understand them.

They wrote all kinds of fascinating quotations on the board under the corresponding questions. (I had to push the first group to go up and write, but after that the flood gates really opened; there was even a line of students waiting to write on the board!) They brought up most of my “go to” passages in the text all on their own.

Thanks so much for this post. It truly generated a meaningful class for my students and myself and I’ll certainly remember it for a long time.

The just a few days ago, and the reason I am writing this post, Kate Lechter commented to let me know she had used the approach with her Intro to Lit class, and it seemed to go well:

Taught this today as a theoretical intro to a lit class focused on crime and punishment, using your suggestion of letting the students outline. It went really well! Thanks for making this public and talking about your approach.

It may very well be that folks that tried it and things went horribly wrong will not leave a comment, but luckily I don’t care about them 🙂 What I remain fascinated and inspired by is that when you document your process and share your work more times than not it comes back to you in the form of reaffirmation and gratitude. Documenting my work on this blog has basically defined my career. There is no way I would have remembered this assignment, no less gotten kudos from strangers more than a decade later, if I hadn’t taken the time to blog it. I am increasingly convinced that blogging is a long-term investment in your soul, and this is the most recent dividend.

This entry was posted in bavatuesdays, blogging, Teaching, Uncategorized and tagged blogging, Dicipline and Punish, teaching. Bookmark the permalink.

4 Responses to Sometimes They Come Back