I have been on Twitter for almost a year now and, oddly enough, I have yet to blog about it. And while some might poke fun that I am only doing so now because I finally found a way to push WordPress, I would say that they are only partially right 🙂

I use Twitter rather regularly, and in the beginning I had a similar reaction to just about everyone else who hears about Twitter for the first time: “Ya gotta be kidding me!” But I subscribe to Alan Levine’s theory of “Being There,” or to rephrase it using the NY Lotto slogan: “You gotta be in it to win it,” so I decided to try it out for a while before casting my final judgment. Needless to say it has become such an integral part of my network that after a year there is no question I would be far poorer without it.

I can’t really add anything profound to the discussions surrounding the value of Twitter, for folks like Alan Levine, D’Arcy Norman, Chris Lott (I wear my protection with pride, Chris!), and many others have done a far better job than I ever could.

What I would like to say is that I have always had a hard time thinking of Twitter as something I could approach faculty with in relationship to a more traditional classroom setting. The ever-eloquent Barbara Ganley once tweeted, “Blog to reflect, tweet to connect.” And I couldn’t agree with that sentiment more, it is the most succinct and accurate description of how these two publishing tools differ. But I still couldn’t see clearly how these connections might work in the classroom without seeming utterly trivial. Academhack has a good post that thinks through the possibilities in higher ed here, and today’s introduction of Prologue, a Twitter-inspired theme for WordPress.com (see a test run here) has me thinking about a couple of things — can I officially call WordPress my muse? 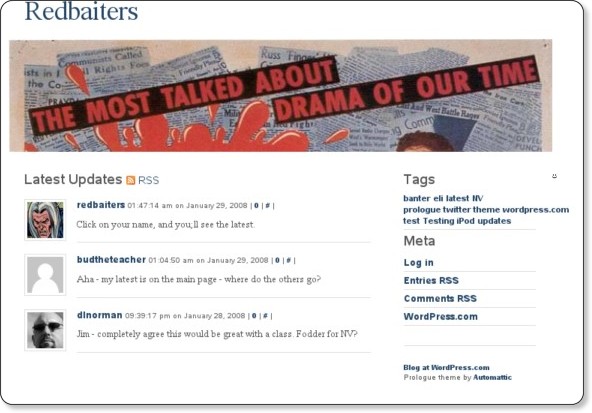 One of the things I like about twitter is the banter and the imaginative ways people use it. Brian Lamb had a stint where he traced his paranoia of being a hippie which made for an extremely funny series of twits over the course of a day, keeping several folks very much entertained. Such antics make up the very wonderful social fabric that is lost in the more LMS/CMS container-driven learning environments that still represent much of higher education online.

So, when I saw the Prologue theme something hit me. This is an invaluable space for totally online courses that entirely lose the banter of a physical/social experience in a classroom which is often not appropriate in a forum or blog. I have never met many of the folks on my “twitter roll,” but I have a very good sense of what a good number of them are up to. I also feel like I have the same level of acquaintance with these folks as I have had with many of my classmates over the years. Wouldn’t this inject a much needed social element to online learning that the blog is far too cumbersome for? For me, the most depressing part about totally online courses is the lack of a more informal way to connect immediately, something like the Prologue theme for WordPress might afford some of this.

Three half-baked ideas for using Prologue in a course:

So there they are…some rough ideas outlining a few possibilities of such a publishing engine. I’m, sure there are many more, but I it’s just starting to click for me. Also, I certainly heed D’Arcy’s criticism that Prologue is far different from Twitter in that each individual can’t really define his/her own group in the way they might on that service. In many ways Prologue users are forced into a limited set provided by the class (or university) structure (I paraphrase D’Arcy’s more precise criticism here). I agree with D’Arcy, and I think that the “restrictions” of a given classroom or campus are exactly what has made Twitter seem so foreign to conventional ideas of teaching and learning. So, perhaps some more thought about a tool like Prologue might afford pre-structured groups (like a campus community) the ability to share and publish in different ways with the ease and immediacy of something like twitter, but as part of an already established framework like WPMu? It may very well have some value in such a setting. Then again, it might not!

This entry was posted in experimenting and tagged prologue, theme, twitter, WordPress, wpmued. Bookmark the permalink.