Re-visiting How we Work at Reclaim

Lauren Hanks has been working on a really cool space that will highlight the various channels through which we are building community at Reclaim Hosting. It’s still under construction, but I’m sure Lauren will share the magic, as well as the process, on her blog at some point soon given it’s coming along beautifully.  While she was going through some old Reclaim posts/announcements she came across this post I wrote in July of 2015. For some reason 2015 still seems like yesterday, but it is 7 years ago now. Crazy.

Thinking about how we work at Reclaim

For context Reclaim had 3 employees when this was written: Tim, myself, and a freshly hired Lauren. I had just given my notice at UMW and was transitioning out of that role and jumping off the cliff of the self-employed. Antonella and I were also preparing to move the family to Italy for what we thought would be “just a year.” It was a moment of transition for sure.

One of the interesting things about that post from 2015 is the discussion of the tools we were using at the time. For example, we were investigating the payroll tool ZenPayroll, which would soon after be re-branded to Gusto. We did decide to use Gusto rather than the more established ADP and it was one of the best decisions we made as a young, distributed, and growing company. It’s like a payroll department that pays everyone, tracks vacation/sick time, files quarterly paperwork, and now even enables stuff like employee reviews, extensive benefits packaging, and much more. I’m not exaggerating the case when I say that Gusto makes much of what we do in the realm of human resources possible for less than $200 per month, it’s truly revolutionary software for a small business like ours. 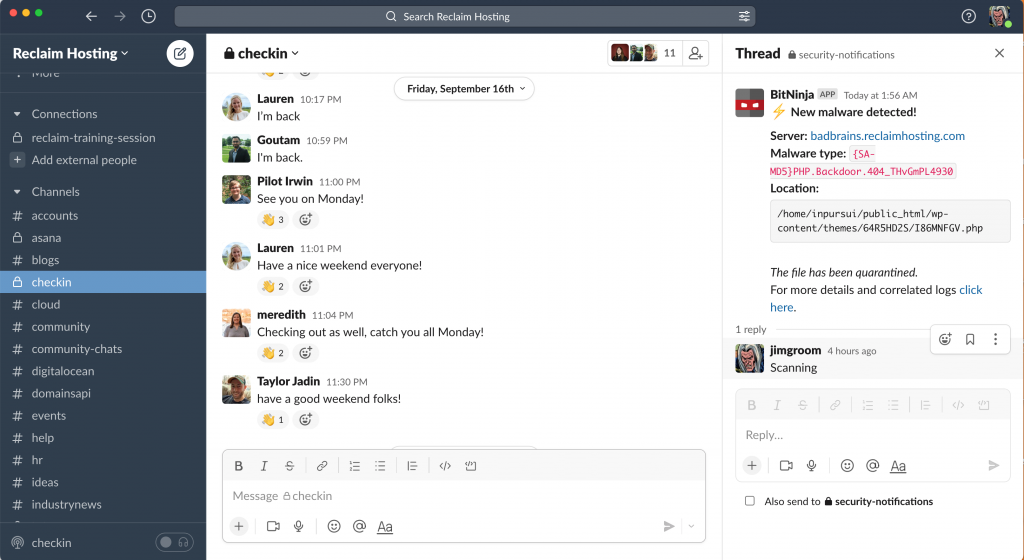 We were just starting to use Slack in earnest in 2015, which meant finally getting our daily management of Reclaim out of Twitter DMs 🙂  We had just signed our 10th Domains school and we needed to get organizized.

Slack has been the central pillar of growing and managing Reclaim, but at a certain point it starts gets too big for managing projects and runs into issues of easily finding stuff. We have continued to tweak and prune, but it remains home base for us to check-in and out, provide internal help on tickets, and shoot the breeze by the water cooler. The best thing we did on the Slack front over the last year or so was to stop pulling in all support tickets. Too many ticket notifications increasingly made Slack a space of dread, especially early on when we were much smaller. Changing it so that only escalated tickets show up in Slack shifted the tenor of the space significantly. Not only did it cut down on notification fatigue, but it made sure every one of them wasn’t a potential problem. And while we still use Slack channels to monitor our servers for downtime and malware, it’s far less mental overhead on the regular which helps balance Slack as both a space for monitoring as well as a space to congregate, get help, and share as a team. That rather small tweak has made a gigantic difference. Another thing to mention here is that Slack huddles are absolutely solid gold for collaborating internally—Meredith Fierro uses them like a boss.

The only tool listed in that post 7 years ago that we no longer use is Intercom.io, and there’s no looking back on that one. Chat-based tools for hosting support is a recipe for disaster. Nothing worse than Tweet-length responses with next to no detail to make the investigation process that much more laborious, not to mention the expectation that support is always immediate. Our time using Intercom ended in 2016 after signs that Tim was going into a chat-induced coma 🙂 We looked at a few tools and decided on Zendesk for support tickets which are all done via email. That’s been a really good choice. While Zendesk is not cheap, it’s money well spent given support remains our bread and butter and we can add additional tools like Zendesk Sell pretty seamlessly for managing customer relationships, which has become crucial to our growth at Reclaim. When you have 200+ large accounts you need to start tracking all the various details to make sure folks aren’t lost in the crowd. in fact, Zendesk Sell ranks amongst the software we added after 2015 that has become indispensable.*

Asana, one of the applications discussed back in 2015, plays a much bigger role at Reclaim than I would’ve ever predicted seven years ago. I joked at the time it was the “anti-Slack” because it’s more focused on lists and tasks than a stream of notifications and updates, and Lauren really has made this application work to help us both organize and streamline projects, work requests, and more. In fact, she’s written a brilliant blog post about Asana workflows that is an in-depth look at how we use Asana to great effect. In short, it helps us manage long-term projects, work request for infrastructure, edtech workshops, and much more. 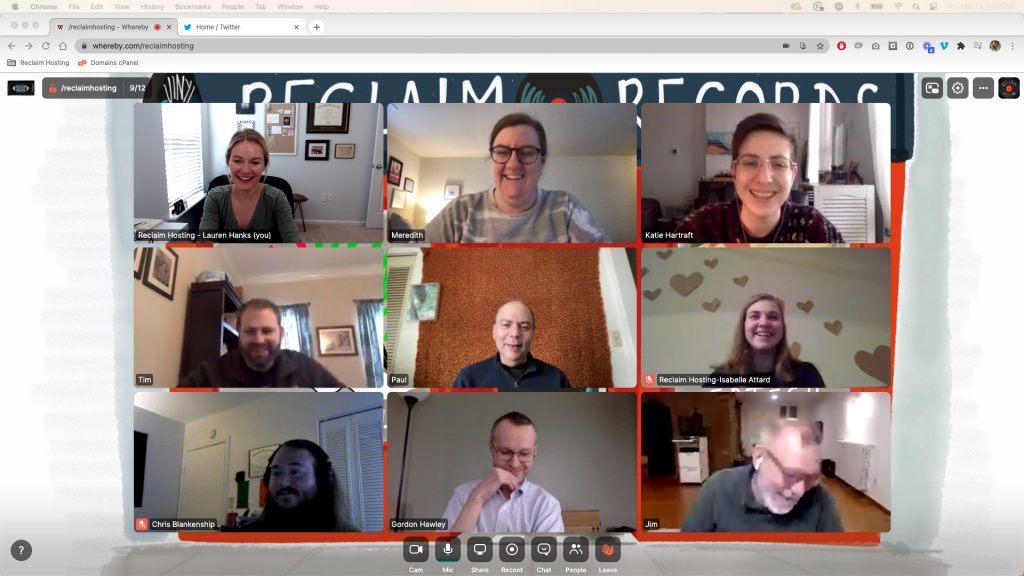 Reclaim in Whereby circa Winter 2021

Thinking about other tools that have become crucial since 2015 and asking other folks at Reclaim means the list quickly became unruly. I’ll start with our OG video conferencing tool Whereby.com (it used to be appear.in) that we’ve stuck with despite the seemingly unavoidable need to use Zoom by the rest of the known world. We have since been split between Whereby and Jitsi Meet (a nice open source alternative Taylor has been championing to great effect) and I can see us going Jitsi Meet entirely at some point, but Whereby is so cheap and has been so solid it has been hard to leave them entirely, even as a backup they would be well worth the $18 per month.

It’s almost invisible at this point, but there is no way we could even run Reclaim without Google Workspace. Google Docs are always useful, but running Gmail to manage employee email has been essential. Thankfully Tim knew when we started that self-hosted email, even for a hosting company, was a non-starter given the blacklist problem that only recognizes power and money. So it’s Google all the way cause email is still the killer app, and this is something we are trying to communicate to Reclaim Hosting customers given it is increasingly more difficult to manage your own email without risking being blacklisted and effectively cut off from communicating via email. 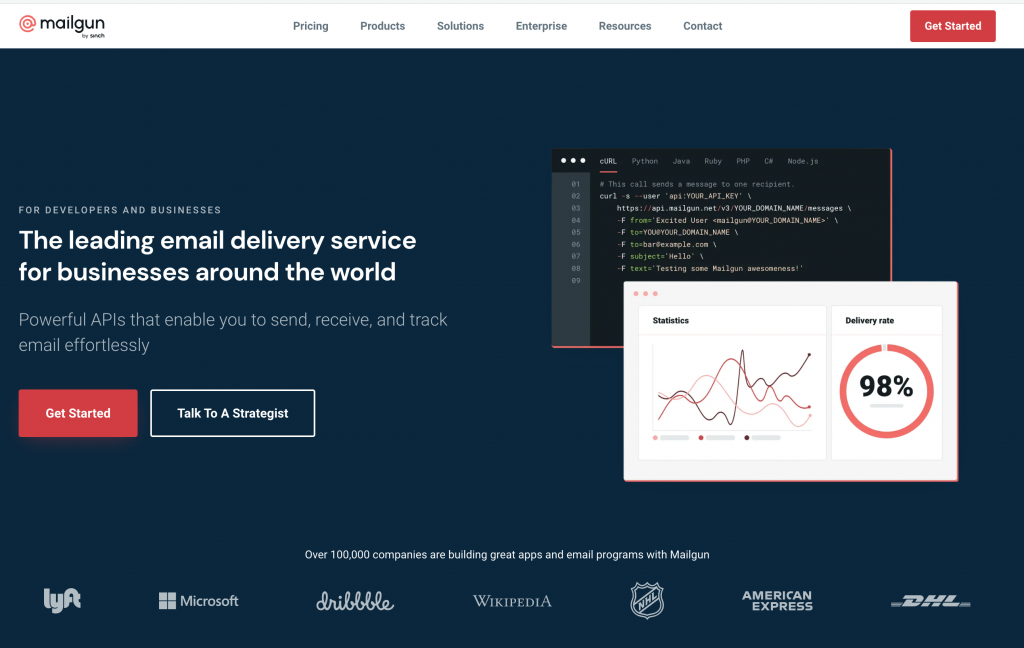 Speaking of which, two other email apps have become crucial for our workflow when it come to outreach and announcements, namely the transactional, API-driven email service Mailgun and the campaign-driven email service Mailchimp. Mailgun delivers our Reclaim Roundup  newsletter as well as our emails for new client welcome emails, etc. in our client portal WHMCS. It delivers thousands of emails for us a month with few failures at a very affordable price point. 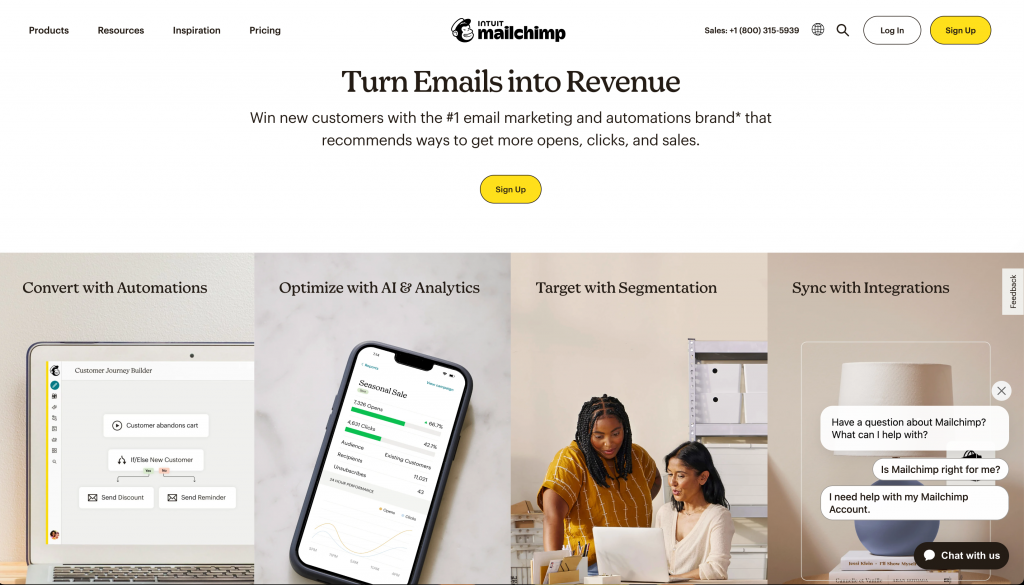 Mailchimp is a campaign-based email tool that allows us to do targeted outreach with admins quite well, but it can get expensive to use for thousands of clients, so there are some limits—but its various integrations, templates, and ease-of-use does make it a valuable tool in the Reclaim shed.

Another tool that is similar to Google Workspace in that we could not really function without it is 1Password. I am not sure why I didn’t mention it back in 2015, because I’m sure we used it. This tool is absolutely ground zero for managing hundreds of logins that need to have unique and secure passwords shared across a group with various levels of access for different apps. I often joked if I was doing edtech in a university I would be proselytizing this tool as ground zero for web literacy, namely organizing your web credentials securely.

Another tool that has become indispensable for how we work is Cloudflare. In particular  Cloudflare’s Zero Trust Network Access has been crucial to help us secure our server fleet by locking down SSH. Chris Blankenship wrote about his work locking down SSH access to our servers, and I am sure we will be doing much more of this in the coming year or two. I have also been using Cloudflare’s load balancing for testing fail-over in Reclaim Cloud, and more and more using Cloudflare’s DNS service to manage various domains that point to public IPs on Reclaim Cloud. Cloudflare is a whole world that I think will play an increasingly larger role seven years from now.

This post started small enough, but has quickly become an unordered list of tools we use at Reclaim, and I’m not even going to dive into our core infrastructure running through WordPress/WHMCS/WHM for most of our cPanel-driven shared and Domain of One’s Own servers. And then there’s Virtuozzo  (previously Jelastic, but re-branded after the acquisition) which we now use to run Reclaim Cloud.† 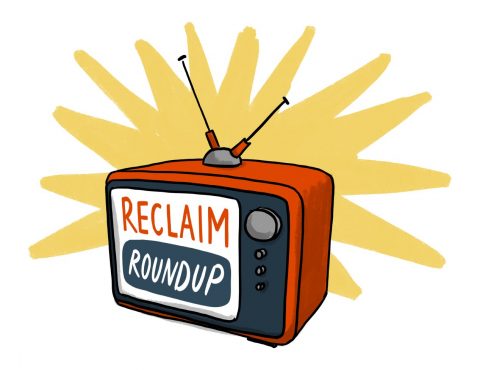 The last set of tools that have become increasingly crucial to our daily work deal predominantly with our evolving community engagement. I have already mentioned Reclaim Roundup when talking about Mailgun, and while only in existence for 9 months, I feel like this newsletter driven by Ghost has become foundational for our broader outreach, all hail Pilot Irwin! In fact, our use of Ghost inspired Taylor Jadin to build a pretty awesome installer for the tool for Reclaim Cloud. 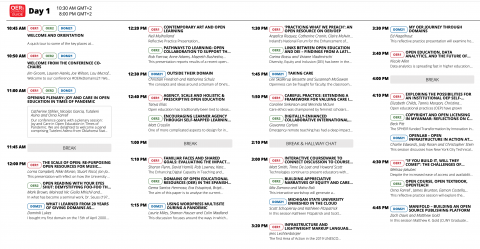 On top of that we have worked with Tom Woodward and Michael Branson Smith (MBS) to design a conference platform for OERxDomains21 that integrates Streamyard, Youtube and Discord using a WordPress headless site as well as some custom code from MBS to build the foundations of what is now our interactive space for Reclaim’s Edtech group that has been running workshops, monthly events, and more. This integration works by using Streamyard as the web-based production space and pushing it out to stream live via Youtube, and the live chat conversation can be integrated and managed through Discord. It’s a pretty slick integration, but another tool we have been experimenting with a lot and I hope becomes foundational is the open source Youtube alternative Peertube. 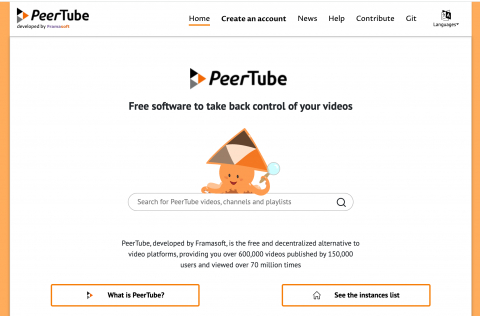 Reclaim control of your videos with Peertube’s

We still manage our forums using Discourse, but no longer manage the support docs and all elements of our community through that channel. In fact, we’ve been intentional about becoming more faceted about the various channels we use to provide support, community engagement, and general announcements across at Reclaim, but you’ll have to wait for Lauren’s post about the new Reclaim Community site I alluded to at the beginning of this post.

If nothing else, I learned a couple of things through writing this long, wandering post: 1) integrating various technologies is crucial to make Reclaim Hosting work, and it reinforces why showing students how the web actually works through linking and integrating is an essential literacy in the 21st century; 2) how dependent we are on various softwares and how that reinforces the value of open source as the pricing for many of the proprietary applications continues to go through the roof—making open source alternatives not only interesting but almost essential.

*It’s also worth mentioning we moved all our Support documentation from Discourse to Zendesk’s Guides over a year ago as well, and that has helped our ticket system and support documents integrate cleanly.

†There’s also Digital Ocean and OVH for our data centers, and Bitninja to defend our servers from malware attacks, which has been crucial.

This entry was posted in open source, reclaim and tagged how we work, reclaim, tools. Bookmark the permalink.

2 Responses to Re-visiting How we Work at Reclaim