It occurred to me yesterday after finally listening to Terry Greene‘s interview with Bryan Mathers for the Gettin Air podcast that I never blogged about our Reclaim Cloud artwork. That needs to be rectified, and I will share the awesome below, but before I do I just wanted to say how much I enjoyed the interview between these two. Possibly the coolest part was when Bryan started interviewing Terry in order to see if he could “draw” out of him some ideas that he could refactor as a visual for the podcast, and voilà Gettin Air has a new logo! 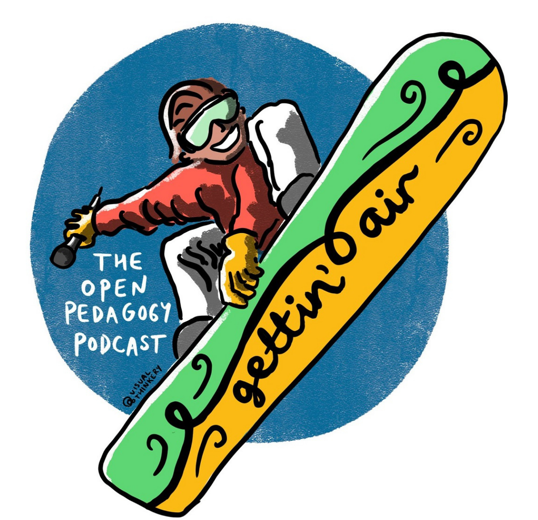 I dig it, especially given I have returned to snowboarding these last few years, but even better was Bryan getting Terry to talk about his idea behind the name, his articulation of what he’s doing and why—it was all so effortless and real. It was a beautiful demonstration of how the interview can become the thing it wants to share. So genius, well worth a listen if you have some time.

Anyway, that whole process reminded me I have not yet shared the work Reclaim Hosting did with Bryan this summer to get started on the Reclaim Cloud aesthetic. Given Reclaim Cloud is premised on a container-based architecture, we initially explored if we wanted to go down the road of shipping containers, and we have some initial sketches from Bryan that I absolutely love.

The containers are actually VHS tapes! A point made clearer in the heavy lifting image that follows: 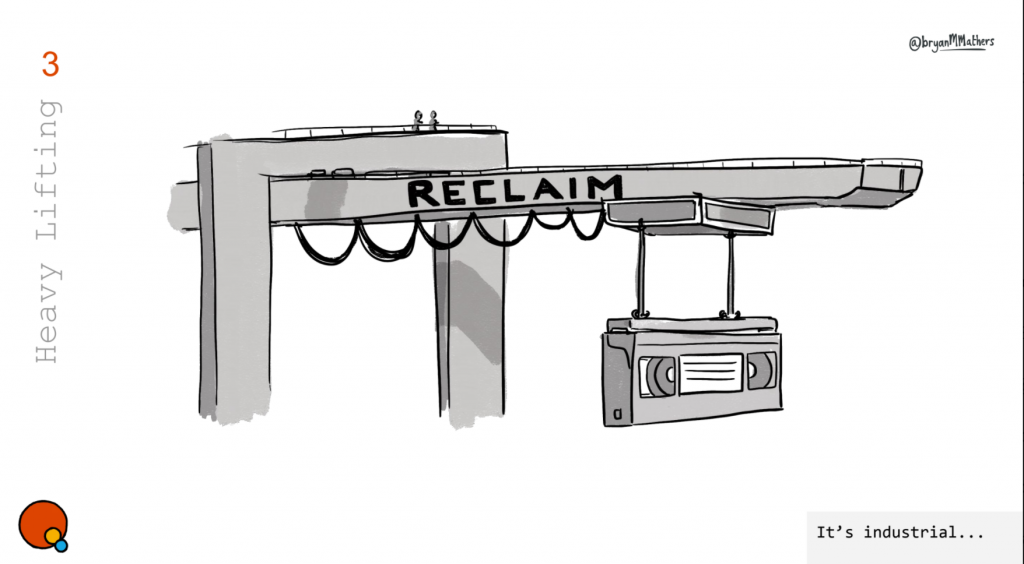 It really is brilliant, it captures the idea of Reclaim Cloud as both container-based and industrial-strength, which it is! But ultimately after talking with Bryan we realized the hard limits of the nautical/container metaphor. So we moved on to Cloud City, an idea Martha Burtis and I came up with for Domain of One’s Own back in the day.

I still love that poster, in fact I have a stamped copy of it framed and hanging on the wall behind me as I write this. So we got to talking a bit about it, although Tim was a bit reluctant given he is not a Star Wars fan, but through conversation the idea of a retro-futurism aesthetic began to emerge a la The Jetsons.

And Bryan’s rough sketches had us very intrigued: 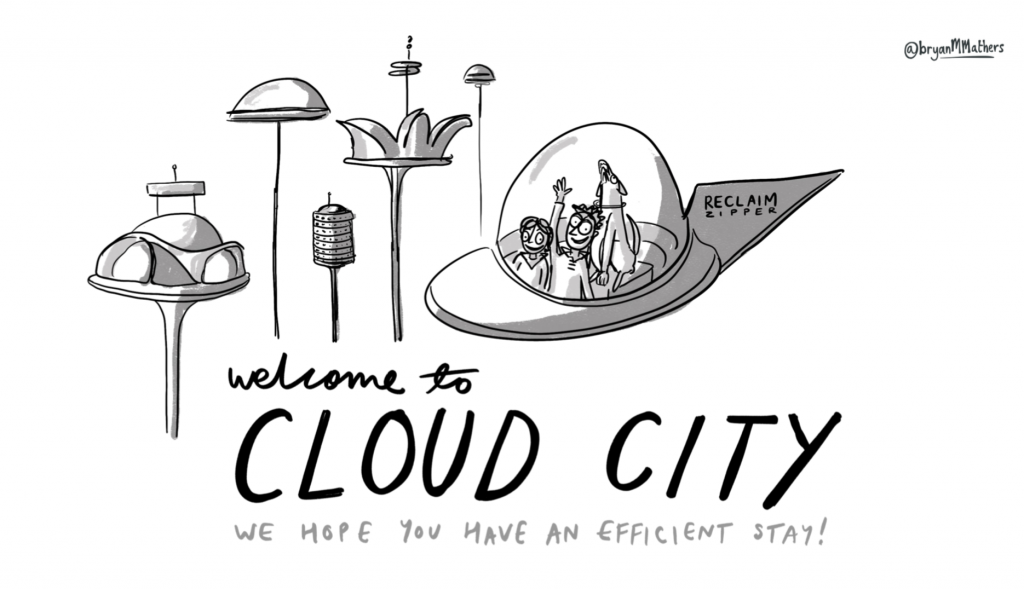 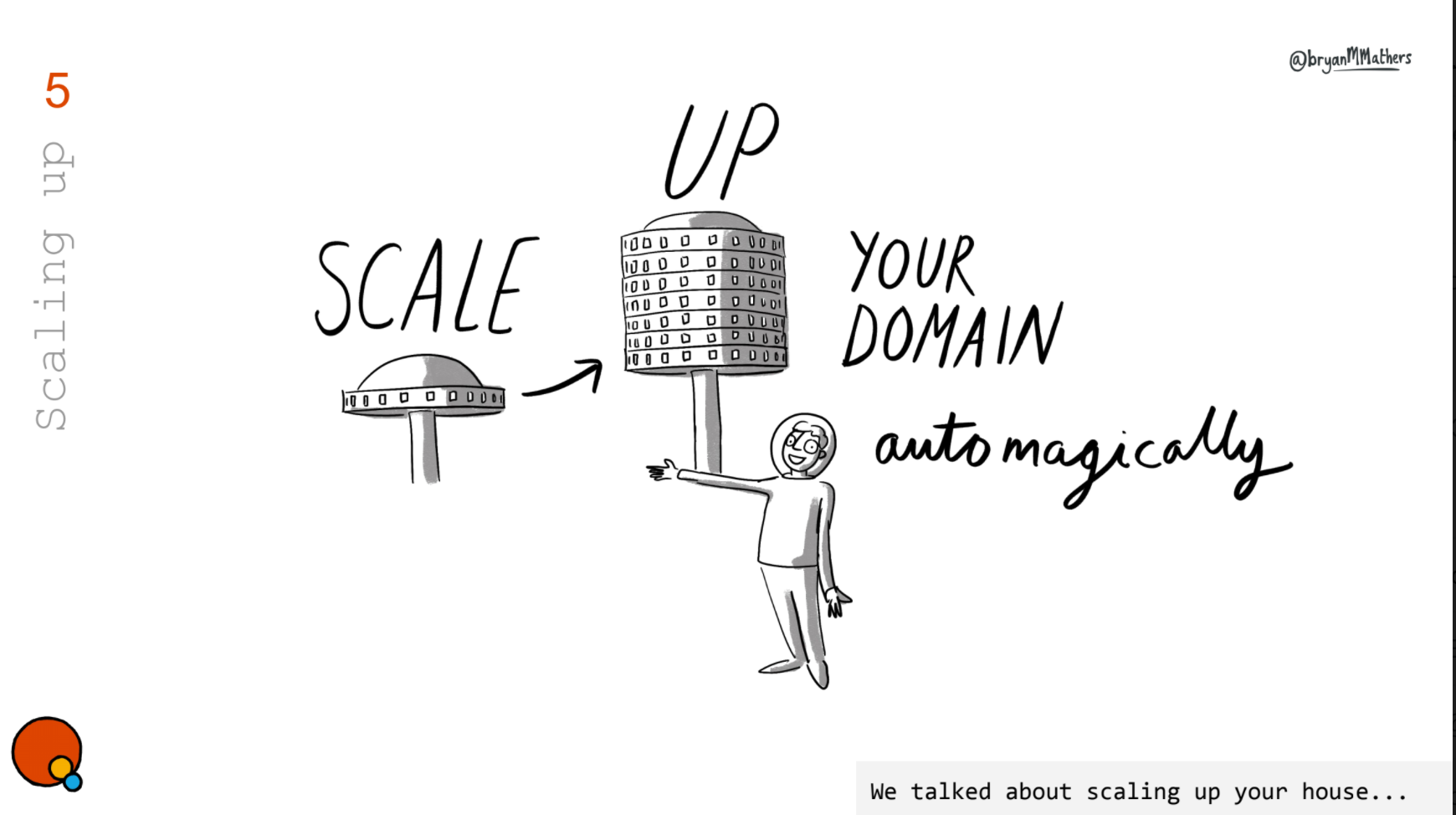 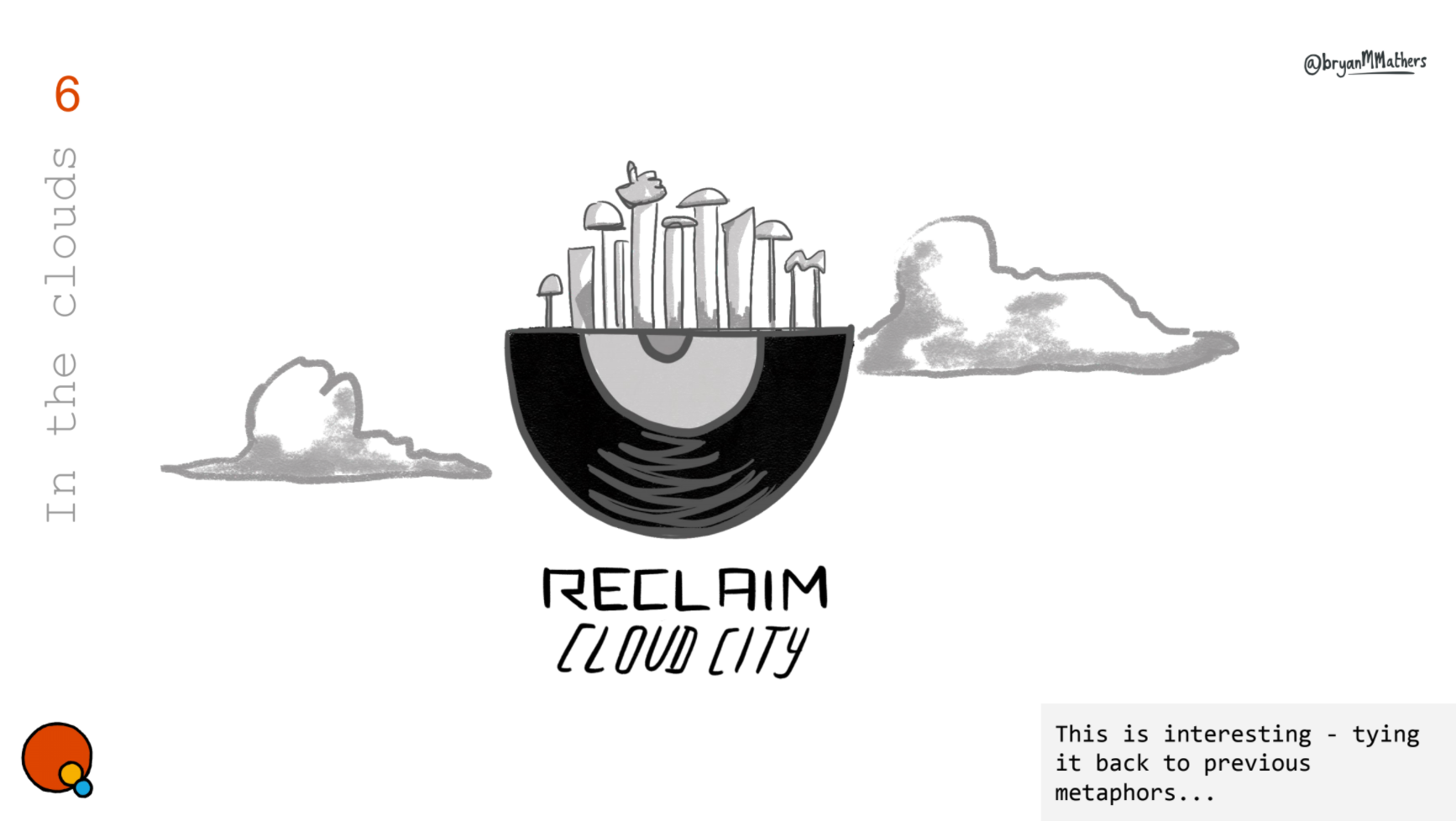 The idea of scaling your domain was fun, and the way Bryan mapped that onto retro-futuristic housing and was brilliant. In the final image the beginnings of a logo/cloudlet begin to take shape already. This was our aesthetic, and we kind of knew it during the discussion, but the seeds of the sketches sealed it. 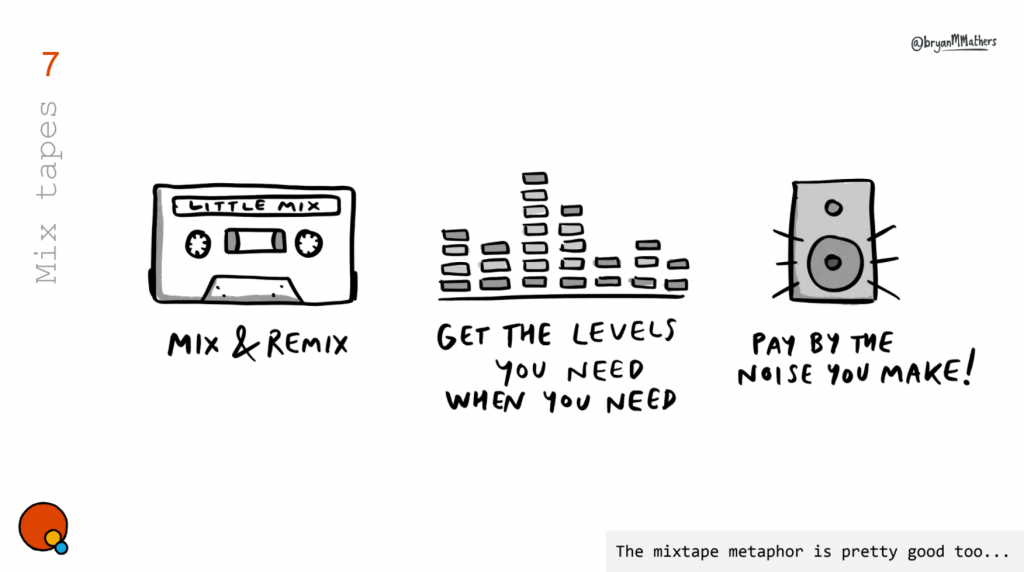 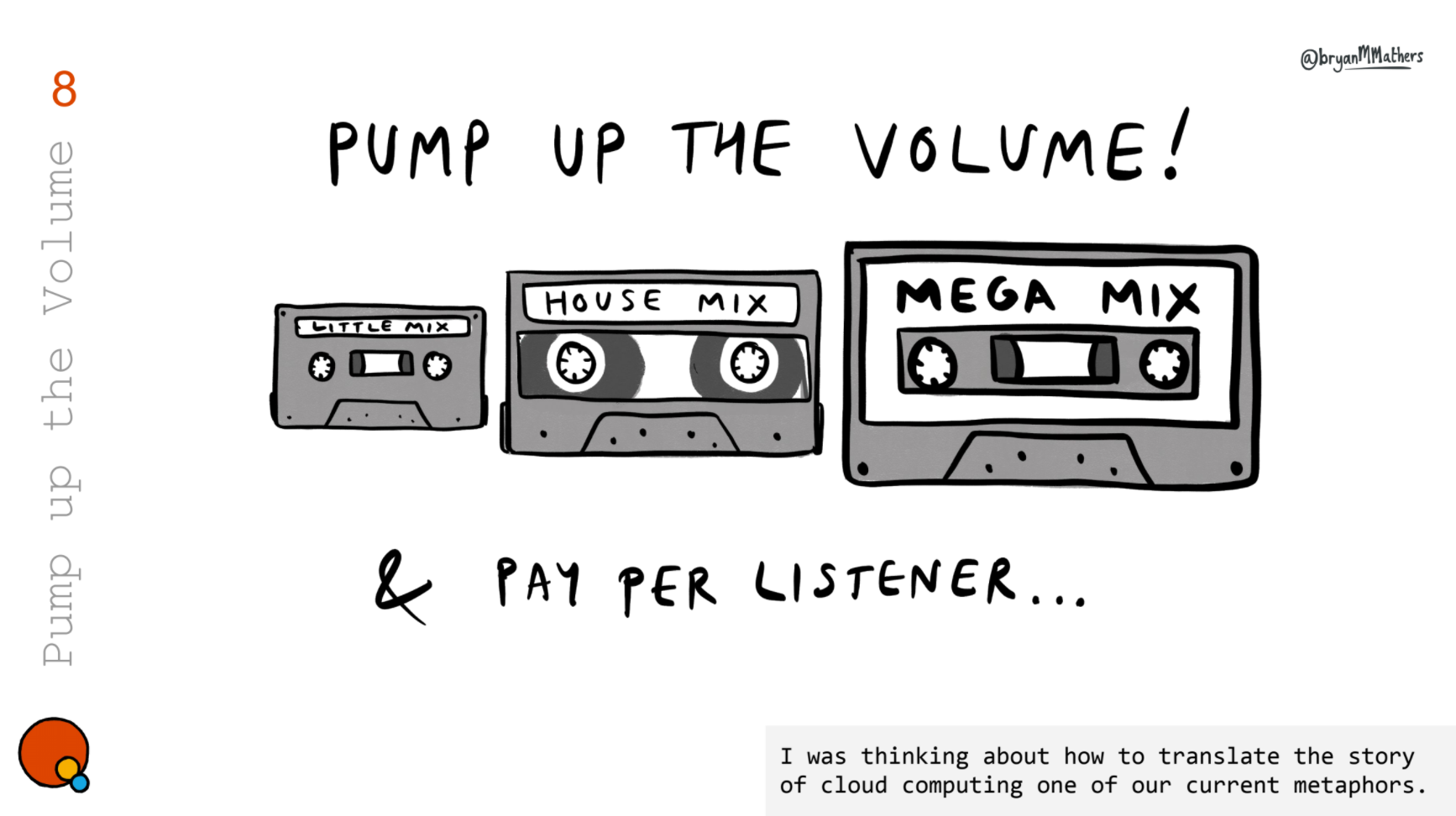 The final option was to stick with the music/video metaphor we already have and push it further with mixed tapes. But it just felt forced, and I think Tim and I both wanted the freedom to jump out of that metaphor and explore something new, and I am really glad we did.

The next conversation after deciding on Cloud City was to scout the internet for some ideas for our next conversations, and that is when Tim landed on industrial designer Arthur Radebough’s Closer than We Think comic strip from the late 1950s through 1963. The way in which the art incorporate an explanatory panel and then the actual art incorporates various explicit arrows illustrating the future gels nicely with our idea of introducing Reclaim Cloud as a way of highlighting for higher ed what’s possible in this new space. So, we got to talking, and the first round of art was amazing:

I really love the industrial logo for Reclaim Cloud which is itself an encapsulated container, a cloudlet if you will, and this idea of self-contained cities became a bit part of our aesthetic. And the fact that Bryan Ollendyke said it reminded him of Bioshock on Twitter just sealed it for me 🙂 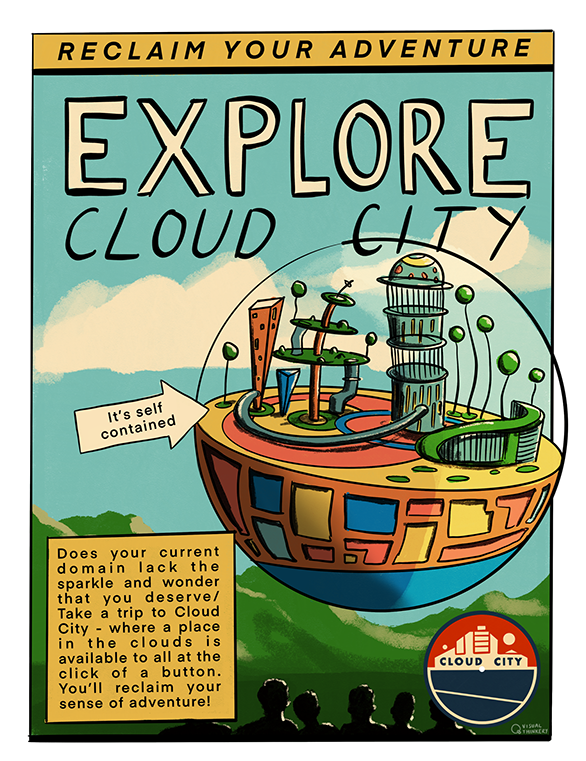 We were sold after this image, a kind of brochure for Cloud City which enabled us to start exploring the idea of what it would mean to try and create a series of vignettes of the different options for anyone interested in moving to the Cloud. It was just too fun, so the follow-up discussion was to explore the Closer than You Think comic strips to highlight some of the one-click applications we have for courses, organizations, and digital scholarship:

Pure magic! The way in which the container has become an organic part of these images is just so awesome. I love the one outside the window of the home classroom. This idea that it is all connected yet separate is one way to understand the cloud, and Bryan really brought it home. And as amazing as all the art is, I think his breakdown of the various elements of a Reclaim Cloud container that could incur costs in a fullblown masterpiece: 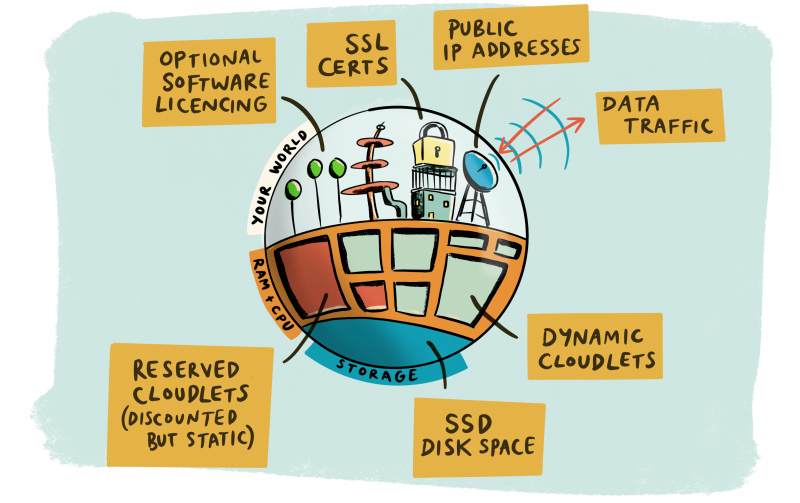 This sphere is everything, literally. I just love the way the aesthetic has evolved and the final bit is thinking through how we’re going to highlight what is happening within each cloud. This led us to the idea of “What’s in your Cloud?” wherein we talk to folks to provide us a peak into their Cloud, what are they running, how, etc. The following image is a placeholder, but we are thinking through ways of trying to capture the individual nature of folks’ cloud for each episode, and Bryan mentioned some kind of comic-like avatar, like my Cotton Mather avatar in a spacesuit hold my Cloud sphere, which would be awesome! 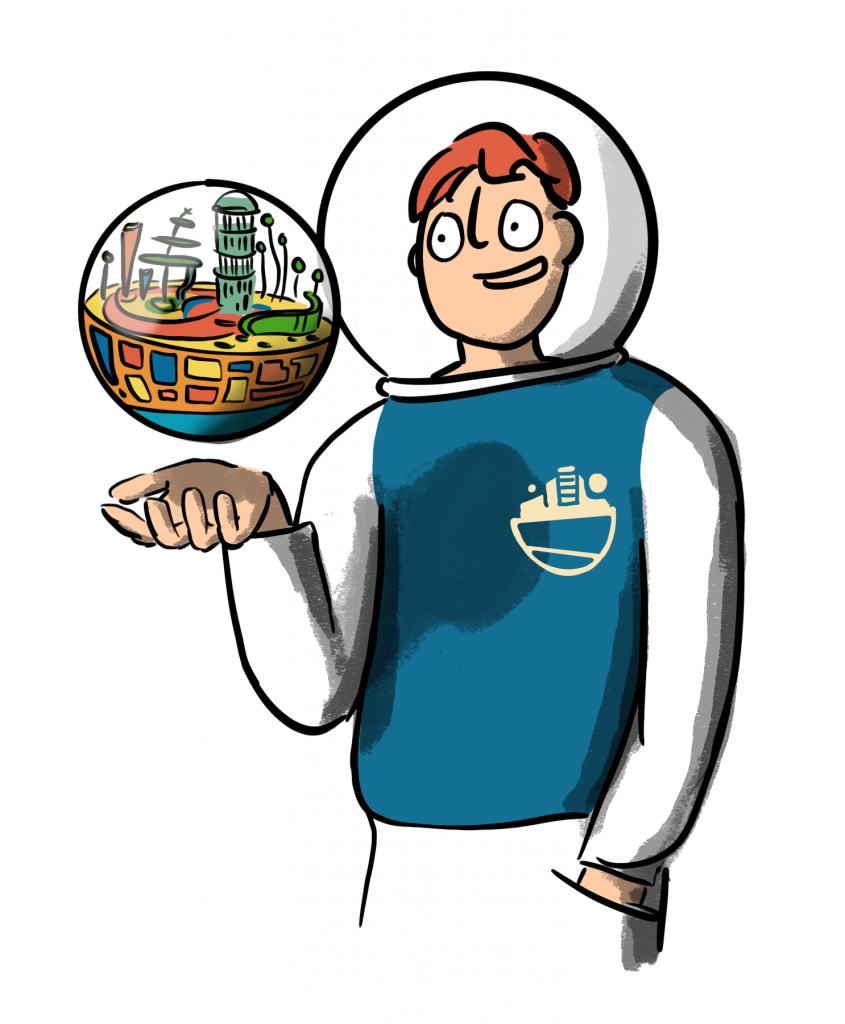 Anyway, I think that brings us up to date, and to be clear this has only just begun. We are thinking of Reclaim Cloud as a long-game. We know it will not replace cPanel hosting; we have plenty of time to experiment with the possibilities; and we can slowly start moving our existing infrastructure over as we become increasingly comfortable with the environment. Not to mention it has forced us to dig in and learn a lot more as a company, and as much as I was kicking myself given I was just start to feel a bit liberated from the day-to-day, in the end I love it. We’ve been dreaming of this kind of infrastructure since we started Reclaim Hosting, and in 3 short months we went from nothing to a pretty full blown product that provides some concrete solutions for academics wanting to host something outside of the LAMP stack. And this retro-future aesthetic is our way to start experimenting in this space without pretending there aren’t also real problems baked into every solution—we’re here to explore right along side you.