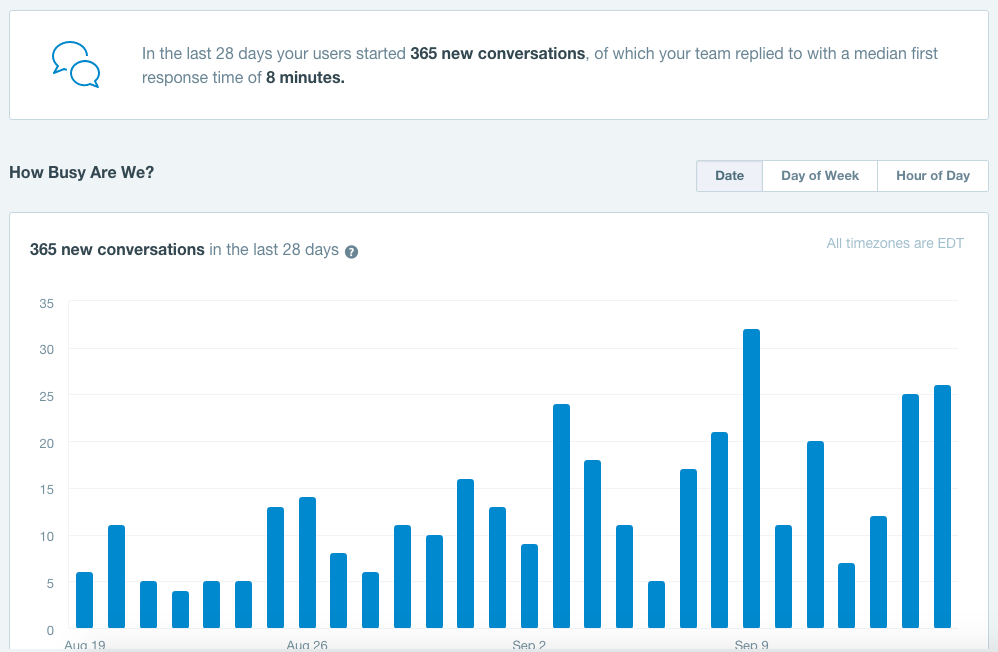 Tim Owens tweeted out the above image that graphs the ramp-up of support at Reclaim Hosting as the semester gets rolling. According to our ticket system Intercom, we’ve had 365 conversation over the last few weeks with an average respond time of 8 minutes. Pretty proud of those numbers, and it has a lot to do with the insane expectations Tim set early on for Reclaim support. I love the challenge, and I have no question we’re up to it. The only issue I have is all the people clamoring for Tim and Lauren Brumfield over yours truly in their tickets—not so goof for my self esteem. [I’m looking at you Maha! :]  Not to mention that since I’ve gone full time I’ve easily add 2 minutes to the average Reclaim response time.

One of the most interesting things about the transition From DTLT to Reclaim has been the way we’ve been able to operationalize and scale much of the experimental work we did at UMW. I was talking with Martha Burtis about this a bit when we were in Puerto Rico, and it’s interesting how I associate our work at UMW with a loose, creative think tank and Reclaim with a broader rollout of those ideas. I have written already about the tools we use to run Reclaim, and I think one of the differences is the distributed nature of our work. At DTLT we shared the same space and we bounced ideas and issues off each other. That provided a unique sense of familiarity, play, and collaboration, at the same time, the physical space also meant we didn’t necessarily have the same impetus to organize our work in the same ways.

Lauren has started an awesome series about the applications she uses to work at Reclaim. I’m really compelled by reflecting on this element of working at Reclaim, and that’s one reason Tim and I were so excited about bringing Lauren on. We understood early on how crucial having someone to help us operationalize Reclaim would be—and we were well aware of what Lauren was capable of during her time at UMW. Joe McMahon, who is doing contract work for us currently, is operationalizing and automating our server environment. In the near future we will be trying to transition all of our servers to a virtualized environment, and Joe’s post about learning to love DevOps is an excellent take on how we are trying to think about our infrastructure.

It’s been an interesting semester so far, and we’re proving we can scale slowly and thoughtfully with good people and an awesome community without sacrificing the personalized support that is the backbone of what we do.

This entry was posted in reclaim, Uncategorized and tagged reclaim. Bookmark the permalink.