I have been quiet on the Reclaim Video front with everything going on with the Fall semester start-up, so before they become a distant memory I wanted to mention a couple of nice hauls of  Laserdiscs and VHS tapes we got in the last couple of months. Back in late August I took a trip to the Fat Kat Records location in Ruther Glen, Virginia to stock up on laserdiscs, and that I did.

There are a lot of gems, I particularly enjoyed the Japanese import of Blue Steel (1990), which I proceeded to watch the next day, its cool to re-visit early Kathryn Bigelow after seeing her career develop as a filmmaker, althoughI think I most enjoy  her early films like Near Dark (1987) and Point Break (1991)—but what a career.

Tonight it is Japanese import laserdisc of Blue Steel @reclaimvideo

I also picked up some VHS tapes on this trip to Fat Kat, and I was happy about that:

And of course some VHS as well @reclaimvideo

I wanna do a Quest for Fire/Waterworld double-feature at some point 🙂 I even got a cassette tape:

Even found Midnight Oil’s Diesel and Dust on cassette

And for a total non sequitur, some Faulkner #reclaimlit

But the real score was a few weeks ago when I found a lot of 300+ VHS tapes on Craig’s List. Full blown lots like this are harder and harder to find, and this one was a total gem. Meredith went to Maryland on her way back from the Nationals game and after hearing about Reclaim Video the Ingram family donated the whole lot for free, including  ton of empty VHS cases. This is a particular collection, I will get more pictures and add them to the ones below, but here is a small taste. 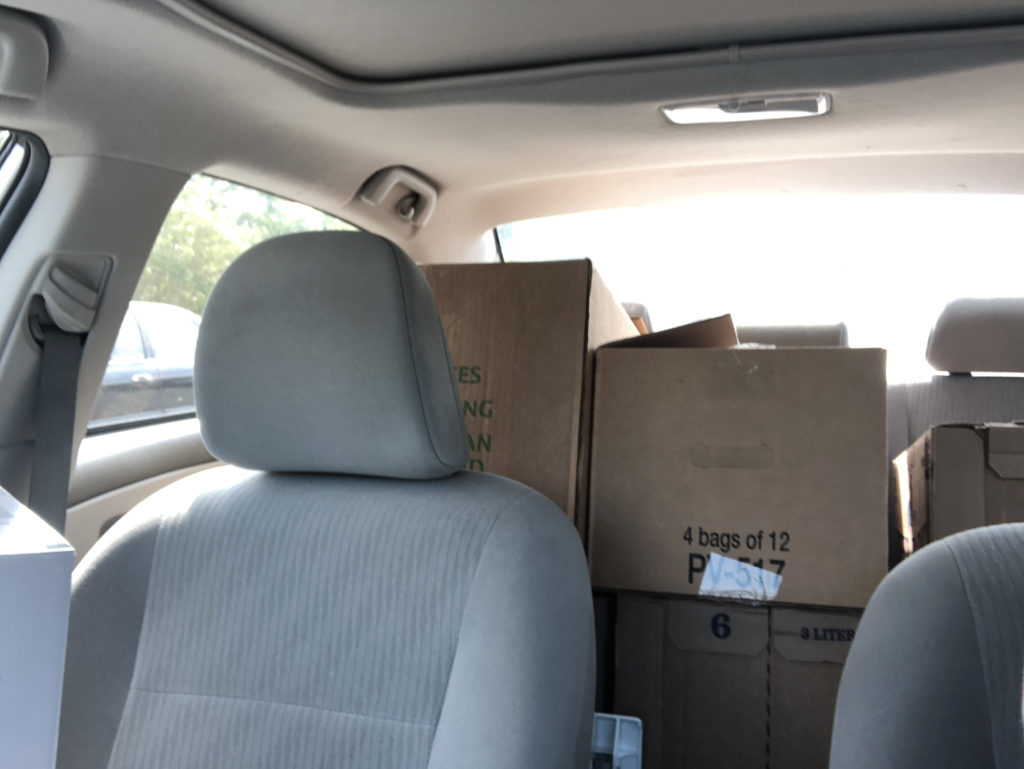 The back seat of Meredith’s car after pickup 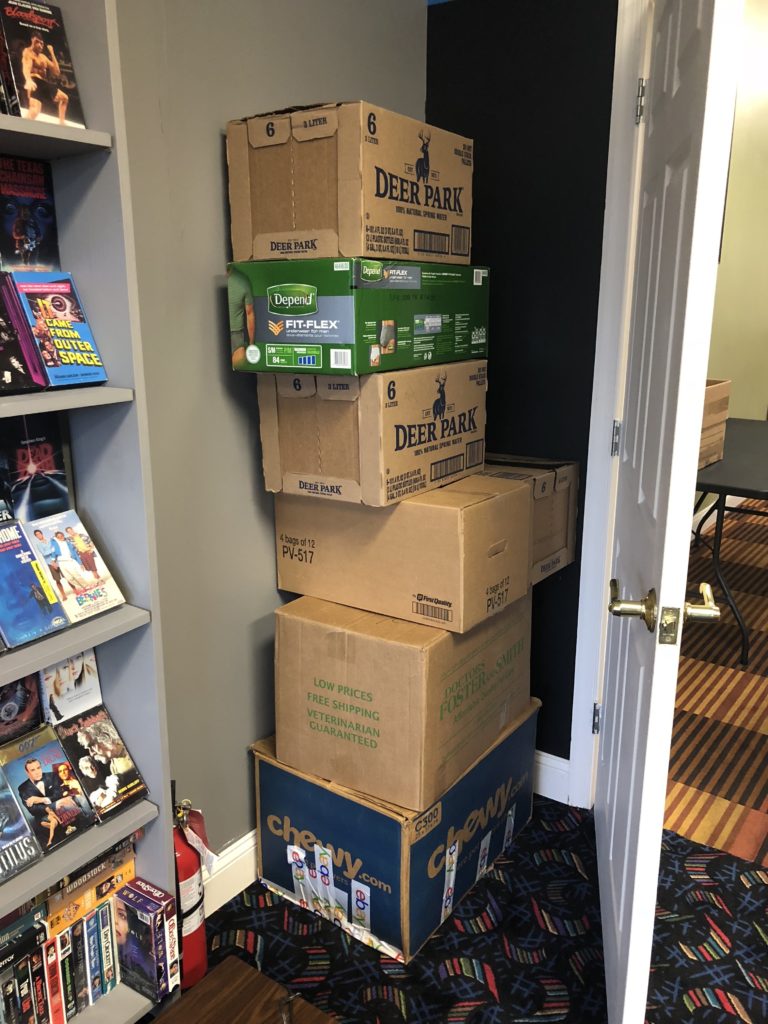 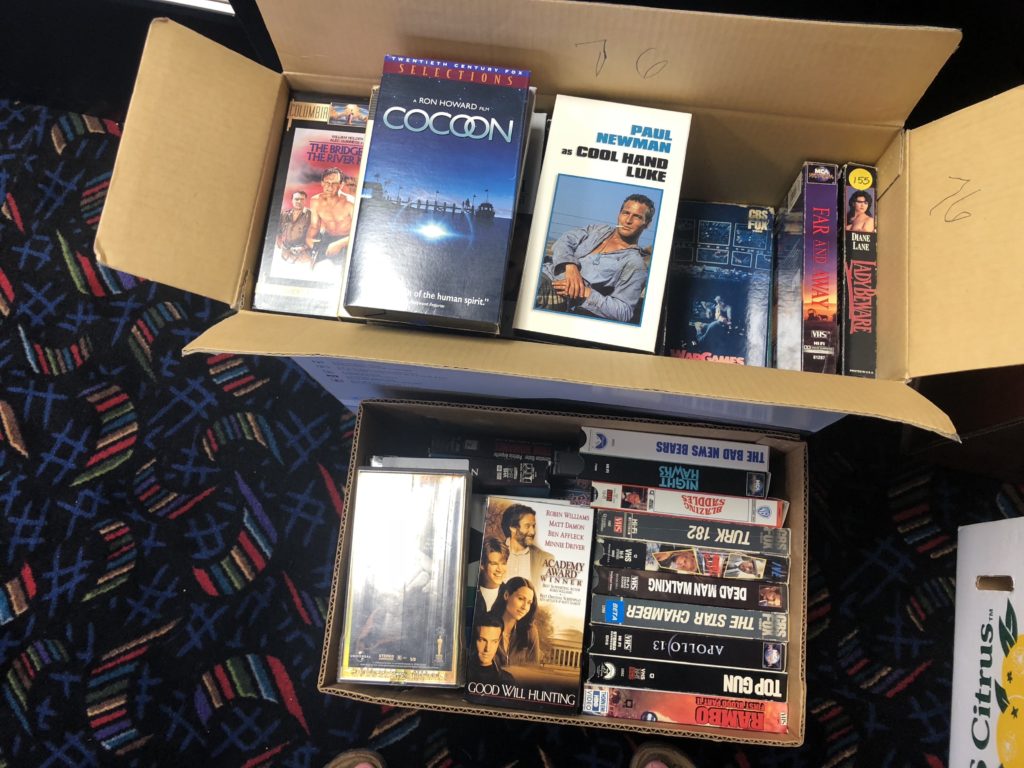 Some VHS tapes from the Ingram Haul, love Turk 182, The Star Chamber, The Bad News Bears and Rambo, and even Night Hawks! (a personal favorite—we now have that one on laserdisc and VHS). 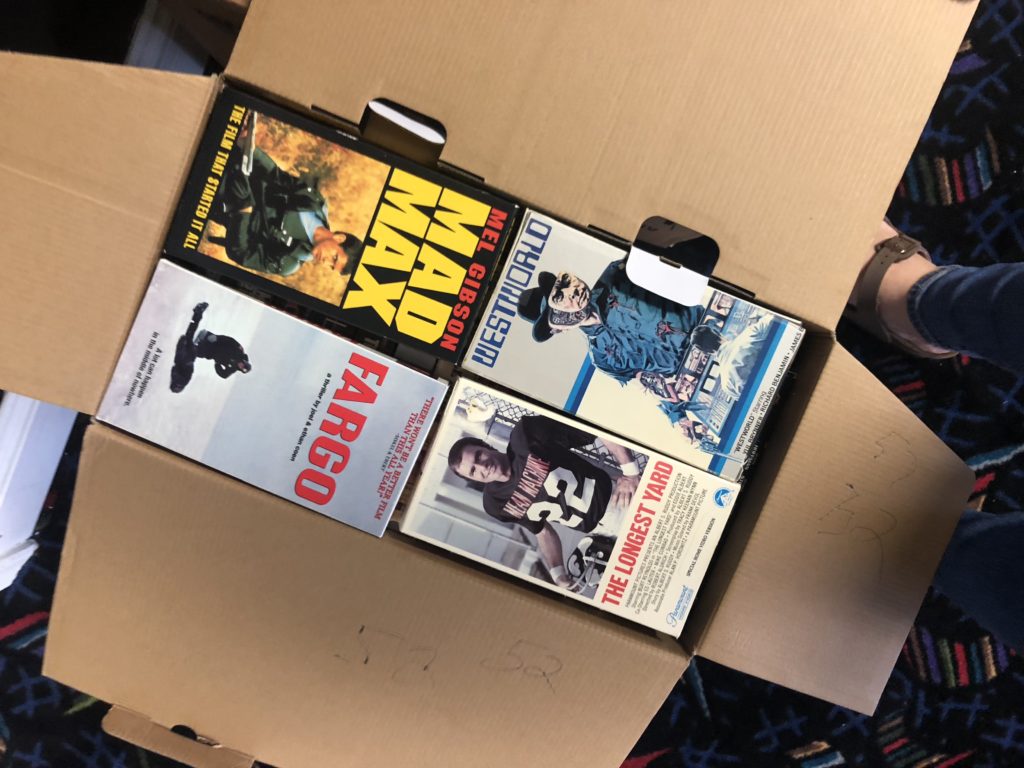 You had be at Mad Max

We still have to inventory it all, but our collection to a major jump with the addition of all these titles, and I have to think we approaching the 1000 mark for VHS tapes alone. I’ll need to confirm as much, but I have to think this haul pushed us over that number. Meredith also got the perfect card for the Ingrams, and now they have a lifetime membership to Reclaim Video 🙂 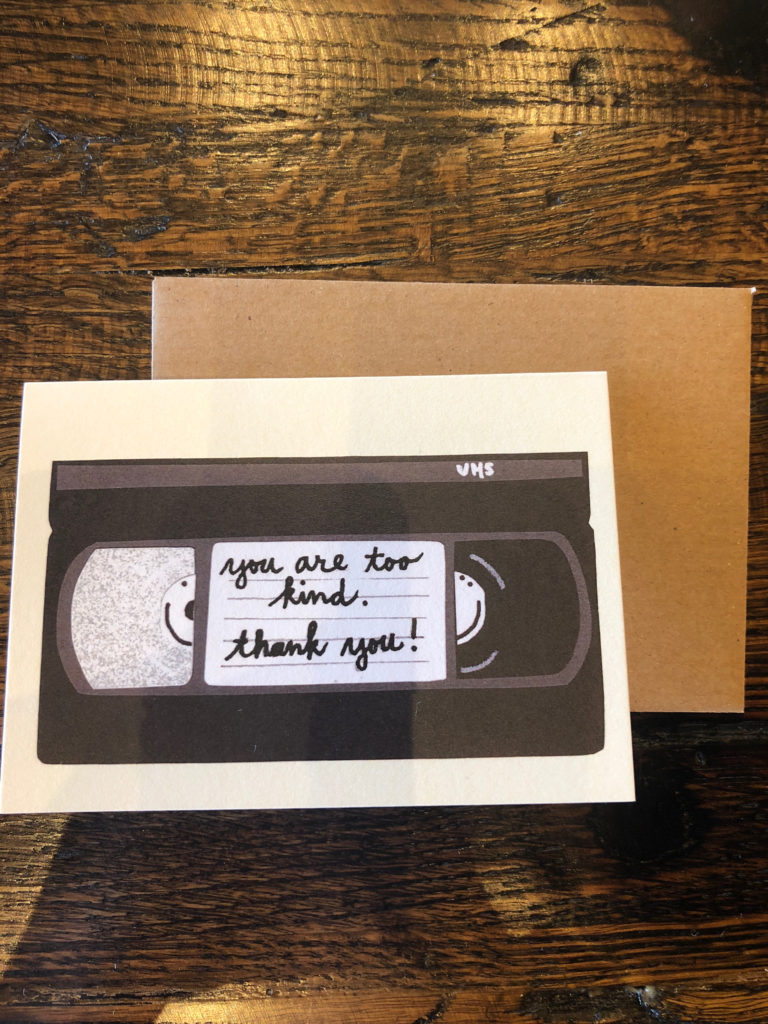 Thanks you card for the Ingrams for their generosity and support of Reclaim Video! 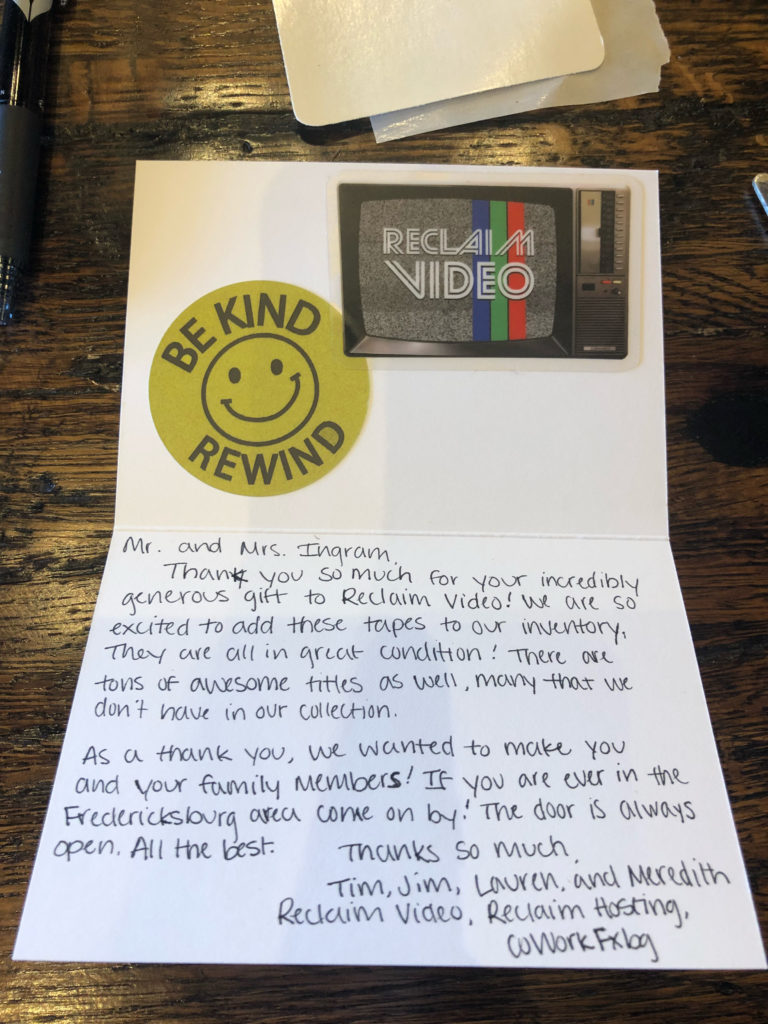 Thank you letter to the Ingrams

And beyond that haul, I got a 4-VHS set on Ebay featuring Streets of Fire (1984), the rock musical from the 80s you might not have ever seen. I was inspired by Paul Bond’s post on the film and his awesome GIFs—it’s a truly bizarre film. 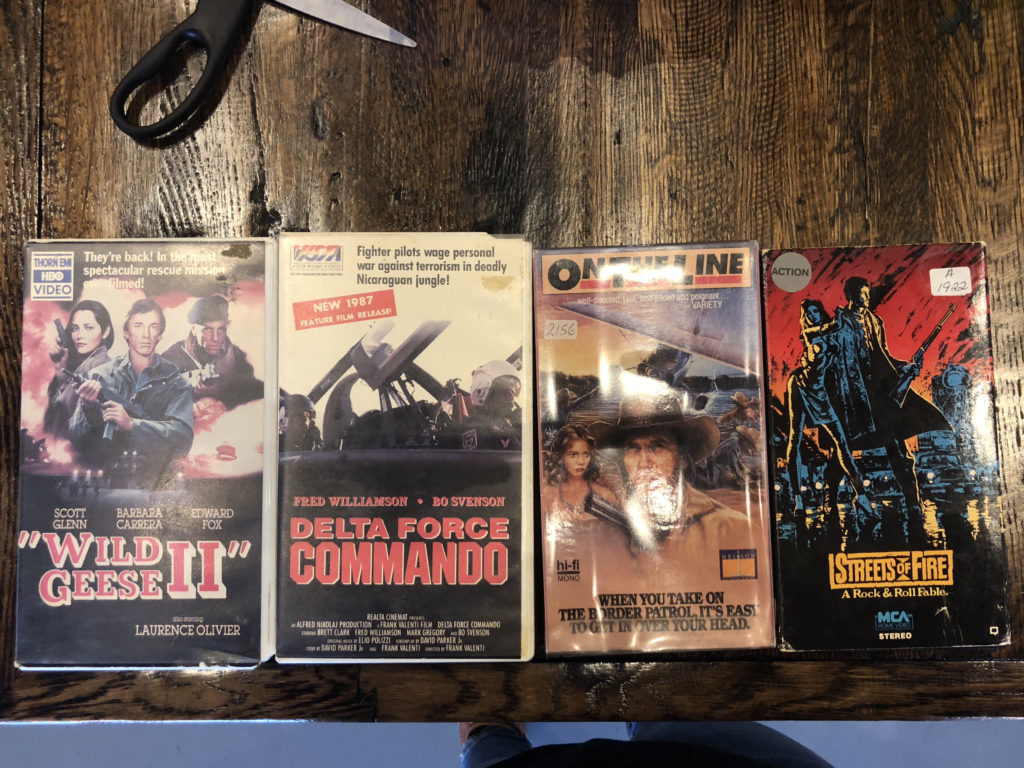 Willem Defoe at his very best

One final note, we have a second part-time employee at Reclaim Video that started a bit ago, so it’s becoming more official everyday. I am pretty hands-off on the day-to-day (understatement), but I understand people actually rent videos on occasion 🙂 And the big news is that there may be hope of telepresence via an iPad robot by as early as December, one can dream. I love Reclaim Video, and I don’t blog about it nearly enough.

This entry was posted in Reclaim Video and tagged reclaim, ReclaimVideo, VHS. Bookmark the permalink.