After my last post I started searching round for timelines and details about early web hosting companies like Geocities, Tripod, Angelfire, etc. and I found a pretty neat timeline from The History of the Web site. Of particular interest was not only that tripod.com pre-dated Geocities.com by a couple of months (Tripod.com was registered on September 29, 1994 and Geocities in November). But Tripod was not up and running until 1995 framing itself as a hosting service specifically for college students to create a space for themselves online:

The domain name for Tripod is registered, pre-dating most other free web hosting services like Geocities and Angelfire. Tripod’s explicit goal is to give college students a way of setting up a spot for themselves on the web, though it would eventually come to be known as an easy-to-use service for free web homepages.

Nothing new under the web’s sun. Reclaim roots! I was now intrigued, and I wanted to get a better look at Tripod back in the day, and the Wayback Machine has a mint screenshot from December 21, 1996. 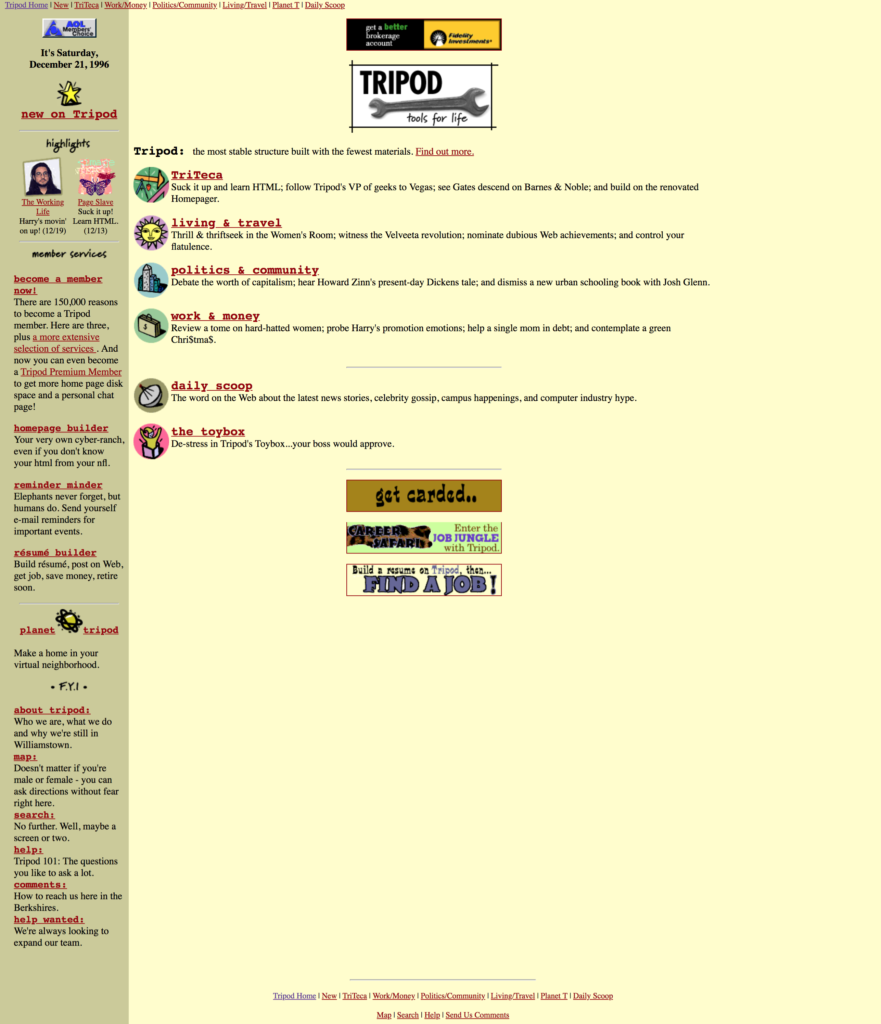 I took the screenshot using the Full Page Screen Capture extension in Chrome, and I’m liking it. I think the whole page is interesting because of the dead space in the bottom right, and the links all the way down on the left are telling. I also like the Fidelity Investments banner ad. At the end of 1996 the service claims to have 150,000 users, a number that seems almost quaint two years for a web-based tech company. I also like the branding with AOL as a “Members’ Choice” site. So much goodness here, so going to add this as another possible site for the OWLTEH exhibit. Are these posts jumpstarting your 90s memory? If so, post a link using this form to a site from the 90s with your description to be considered for the Exhibit happening in Coventry in exactly two weeks.

This entry was posted in OWLTEH, reclaim and tagged owlteh, reclaim, tripod. Bookmark the permalink.