Getting back into that bava blog groove, and oh it feels so good! I blogged my weekly watch at Reclaim Video a few weeks ago, so this is more catch-up. Once I get settled a bit I’ll pick this up again, but better to have blogged from behind then to never have blogged at all! Words of wisdom, Jimmy, words. of. wisdom. 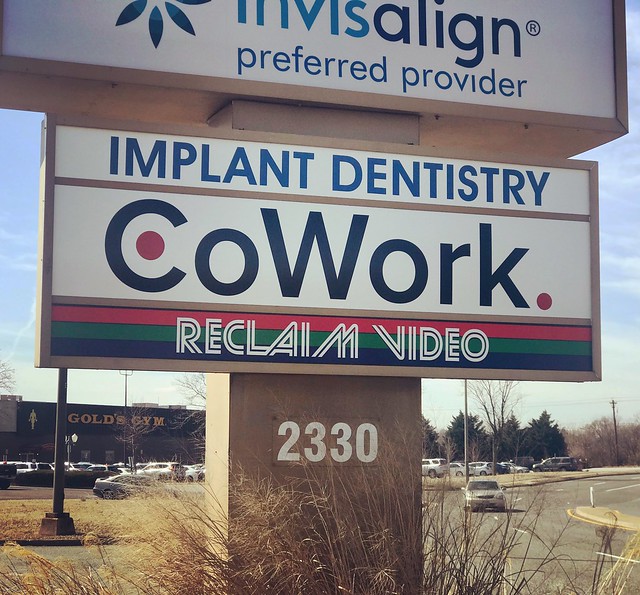 Reclaim Video’s not so digital signage
So once I got back from Lansing (more about that trip to come) I locked in for a solid week of Reclaim Video clerkmanship. It’s a tough job, but someone has to do it. To be clear, we currently have two clerks working at Reclaim Video who actually do the work, so I’m more like the eccentric old man shuffling around with random outbursts about this movie is awesome or this one sucks, etc. I’m not sure how the rest of the Reclaim crew feels (and I may not want to know), but I might be even less productive than usual when I’m on-site at Reclaim’s headquarters. I blame the fast approaching senility.

But in the end productivity is little more than a neoliberal myth used to extract value out of my virtual labor. So, what would any self-respecting person do to resist? That’s right, go to the movies! And what did we watch, you ask, well, let’s go to the tale of the tapes….

Tim and I watched Killing Zoe together, which was directed by Roger Avery who worked with Tarantino on Pulp Fiction that same year,1994, so it was kind o a moment for him. I do love the opening taxi ride through Paris, but the film seemed pretty dated 25 years later. I realized watching this one that Eric Stoltz can’t real carry a lead role all that well, and  Jean Hughes-Anglade gives Al Pacino’s ridiculously over-acted performance in Scent of a Woman a run for its money in this one—-ooooh rah! Nonetheless, the laserdisc was in prime condition and Julie Delpy did what she could—I always find her convincing—but the prostitute with a heart of gold working her way through school is already such a cliche role it can be a hard role escape its gravitational pull of predictability.

Fort Apache, the Bronx on Selectavision, there is something so 80s about that formula I can’t even express it. It’s kinda like Mikey from the Life cereal commercials dying of an exploded stomach while chasing pop rocks with Coca Cola. Anyway, this is movie belongs to what Frederic Jameson described as gang war films visualizing  the ‘near future’ through the lens of internal civil war.* He includes other late 70s and early 80s films like The Warriors (1979) and Escape Form New York (1981) with Fort Apache, and the idea of near future urban civil war movies would make an interesting film festival. In fact, you could also in Neil Smith’s ideas around the revanchist city to see how the myths of the “new urban frontier” also inspired a wide range of films during the 70s and 80s from Death Wish to Crocodile Dundee.  And the whole vision of The Bronx as the inner city frontier from which civilization has fled is almost the essence of Fort Apache, the Bronx, it is literally re-positioning the frontier in NYC, and invoking a more contemporary vision of conquest through gentrification. I mean the film opens up with Pam Grier executing two of NYC’s finest at point blank , which is an odd, retrograde hat tip to her thriving career just a few years earlier as an ass-kicking action star. The scene later in the movie where she cuts a john with a razor blade hidden in her mouth was akin to the Alien popping out of John Hurt’s stomach for me. She steals the film in her bit scenes, and while I am a fan of Paul Newman, this is not his finest hour. He tries his damnedest, but the film’s heavy-handed approach is far too tedious for him to transcend. That said, the shots of NYC in the early 80s is stunning, and the documentation of the South Bronx during a moment when hip hop and rap are emerging from this urban “frontier” make for an interesting counterpoint to the general longing for law and order through colonization. Anyway, that was a longwinded way of saying I went to grad school once….next!

I pulled out John Coltrane: the Coltrane Legacy to get a sense of the laserdisc sound quality, which was one of the real revolutions of  this medium. The laserdisc was an early taste of the CD revolution that would explode in the 90s, and this Pioneer laserdisc was part of the stash of nearly 2000 we bought in January from Fat Kat Records. The audio was awesome, but even better was the music. I know next to nothing about Jazz, but I had heard A Love Supreme by Coltrane and was moved. So, I put this on, and his rendition of “My Favorite Things” was magic. But I know little about Jazz, so I can’t really speak to the music, but what gripped me about this documentary was that it had a series of recorded sessions peppered with interviews, and Elvin Jones, the drummer of the Coltrane quartet, were wild. He spoke of Coltrane as if he were truly an emissary of god, and there was this sense of awe and adoration he exuded about Coltrane that made him almost Christ-like. Come to find out there is a church in San Francisco dedicated to Coltrane called the St. John Coltrane Church—what else is there to say?

Possibly the most forgettable of the movies I watched was The Andromeda Strain (1971). I was surprised given it was directed by Robert Wise, but it was perhaps overly faithful to the novel and left for a ridiculously slow and boring paced film. I had not seen it previously, so was expecting more, but the opening was like an overly long  Twilight Zone episode without a twist. It was definitely a letdown, but I can report the laserdisc is in fine shape, and played beautifully, at least the parts I watched.

Ranking right up there on the turkey scale with Andromeda Strain was Parents (1989)—though less to my surprise. The best thing about this movie is the VHS box, and the tape was in pretty poor shape, which effected the experience. Nonetheless, as much as I enjoy Randy Quaid sometimes, this was predictable and boring. Suburban patina hiding a cannibalistic urge that is fairly pointless. I wasn’t even that taken with the period elements, which are usually an easy win. I subjected Reclaim Video clerk Xander to this one given it was my first time, but I’m afraid I may have wasted his time. The VHS tape was interesting because it was recorded on SLP, the lowest possible quality setting. It’s almost like it was a transfer, and you could tell because there was significantly less tape that on other VHS movies we have. How bad the picture and sound quality was may have been the most remarkable part of the experience, and a reminder that VHS by and large was not a pretty format when compared to laserdisc.

I also watched Rosemary’s Baby (1968)on Selectavision, which was pretty impressive quality wise. The film is one I have seen many times, but I have never seen it videodisc format, and it was well preserved and the quality was easily as good, if not better, than VHS. I love the Selectavision just cause it is so wild, and here is a video of me demonstrating how you insert a videodisc into the Selectavision player:

I also had a bit of fun playing Morricone Youth’s Mad Max album in concert with the VHS tape scene of arguably the best opening to any movie. I don’t think I had the right son, but it works all the same. Morricone Youth pretty much rules, and I am trying to secure Mario Bava’s Danger: Diabolik (1968) on VHS or Laserdisc so I can play Morricone Youth’s take on that soundtrack to the film. Stay tuned!

I also went on a bit of a mini Corey Haim marathon, even if unexpectedly. I remain a huge fan of Stephen King novel adaptations from the 1980s. In fact, the list is impressive when you thing about it: The Shining, Dead Zone, Christine, Salem’s Lot, Firestarter, Cat’s Eye, Creepshow, and the list goes on. Silver Bullet (1985) is probably a lesser known film, but it was a favorite for me back in the day. I loved the whole idea of some crazy uncle (Garey Busey) giving his disabled nephew a souped-up wheelchair called Silver Bullet for fighting a werewolf who turns out to be the local chaplain. Good stuff, and I was pretty impressed with Corey Haim, I did not remember him in this one, but he was convincing, and I enjoyed it on re-watch.

But probably the most powerful film experience for me on a personal level was First Born (1984), Corey Haim’s very first film, although he played the younger brother to protagonist Christopher Collet of Manhattan Project (1986) and Sleepaway Camp (1984) fame. The film has an insane cast featuring Terri Gar, Peter Weller, Sarah Jessica Parker, and Robert Downey Jr., to name a few highlights.

But beyond that, the film centers around separated, but soon to be divorced parents (as so many 80s films do), and the effects on the kids. In particular, when the absent dad is gone how mom (Teri Gar) takes in a freeloading drug dealer (Peter Weller), and the effects on the kids. The sense of tension and deep seated horror of a split family is real, and the way in which the brothers try and cope struck me. What’s more, it was all filmed in new Jersey, so they are playing lacrosse (which as a Long Islander was a regional signifier) and the brothers would fight over who stole whose batteries for their hand help video game or walkman—talk about 80s! I don’t know, this film just struck me on a level that is hard to define, it is far from a great film cinematically, but one of those artifacts of time that say some much about moment. In many ways the opposite of timeless, but almost as important as a result. If I ever catch up on my blogging I’ll write more about this one cause it hit a nerve.

I am missing a few films I watched, but saving them for update 3 because I will catch my groove here soon and make this far more regular, but for now it’s just another brick in the bava wall!

*This is taken from a footnote in The Geopolitical Aesthetic, and you can read it here.