Tommaso has gone from designing levels in Geometry Dash to building out maps in Beat Saber, it’s been fun introducing him to apps we used in ds106 like Audacity. #4life

A couple of years back now—Christmas 2016 to be precise—we got the Virtual Reality headset for the PS4. I was pretty fired up about the idea of a new form of gaming coming to the living room (kinda like the idea of Atari 2600 in the late 70s). While I enjoyed it (and still do) I think I was expecting a bit more a bit faster. That said, the Resident Evil 7 demo left an indelible impression of just how insane VR can and will get. Watching Tim walk through that creepy ass house, and then trying it myself, took horror to another level. And Tim has been good about feeding me games like Super Hot, and more recently Beat Saber, that have kept the dream alive.

In fact, back in January Tim and I went to a place called Virtual Experience the night the University API conference  ended (I will post about that awesome event eventually). It was basically a storefront in downtown Provo, Utah where you can go with friends to play VR in teams. The space had five or six temporary walls that divided the room up longitudinally into 6 or 7 nooks which had chairs and sofas where you can watch folks play VR. It was bizarre, and we got to finally play with the HTC VIVE VR system, which has a few games the PS4 does not, such as QuiVr which is a bow and arrow shooter. I came back telling tales to my youngest, Tommaso, who seemed to internalize them because during my next trip he had convinced me to buy a VR system for the gaming PC that up and until now has been primarily used for Cuphead (that might be the greatest aesthetic gaming experience I have ever had—I love Cuphead even though I suck at it). 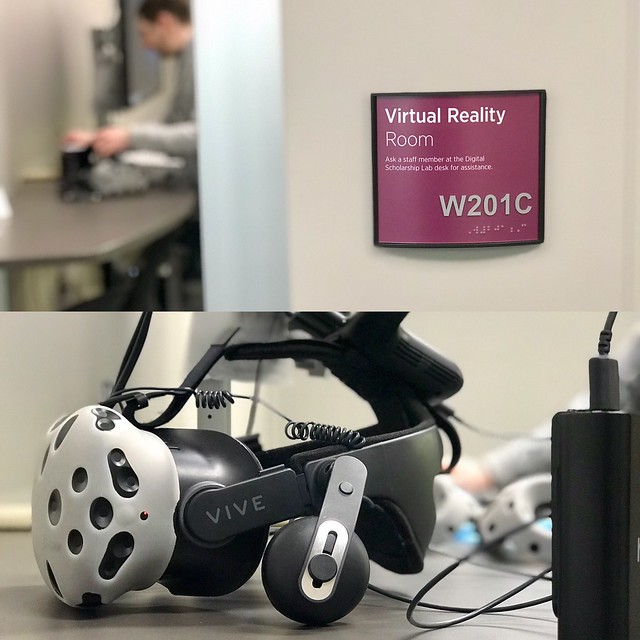 The purchase may have been sealed after I spent at Michigan State University’s Digital Scholarship Lab that had a Virtual Reality space. I spent some time there checking out their setup and chatting with the folks using the space.  I won’t even get into the whole 360 room, that is yet another post I need to write.

Damn I feels the walls caving in on this blog when I think of all the things I have yet to post about—forza Jimmy! So, I got back from Michigan State and bit the bullet on the VIVE and Tommaso was more than thrilled. Why? Not so much that he wanted to play VR, because he had been doing that with the PS4, but he had been doing his research and he wanted to not only mod games like Beat Saber, but he had it in his mind that he could design map levels for his own songs—turns out the kid knew what he was talking about.

After unboxing the VIVE we had to set it up, so Tommaso and I got to work. A big issue with the VIVE is that when updating the firmware on the motion detector base stations, you run the risk of bricking them. That happened to us for one of the two motion detectors, and after travel I am usually less than patient, so I lost it and cursed the whole enterprise. I explained the issue to Tommaso and then knocked out for 12 hours. When I awoke Tommy had found a solution on the Steam Community forums that actually fixed the issue, which was fairly involved, it’s the second post in this thread if you’re interested. I was blown away, he was figuring out how to track down fixes online, all the while marveling at the fact that people share the stuff they learn with others so freely and thoroughly.  That’s the web I want him to grow-up with and to both expect and nurture. So we got the base station working and Tommy played with his mods, the huge song library beyond the limits of the PS4 Beat Saber, the ability to switch out light sabers for baguettes was a big hit, but he wanted more. And that’s when he stumbled on the following Youtube video that takes you through designing your own song map for Beat Saber. In particular, BennyDaBeast has an impressive tutorial wherein he takes you through using the Mediocre Mapper and Audacity to create a song level for Beat Saber.

It was pretty wild watching Tommy work his way through the tutorial, and it felt good that I could help him a tiny bit with downloading the Github repo and the basics of Audacity. But he was on his own with the Mediocre Mapper tool (where most of the work happens) and so he went to work on making the Undertale song “Spear of Justice” by Toby Fox playable in Beat Saber:

And here are a few words with the auteur:

It s super fun to watch him get so deep into the process, and far from mindlessly playing these games, this is a world he wants access to. Best of all, he’s quickly learning a fair amount of the tools and useful information are just a few clicks away.

1 Response to VR or, how Tommaso became Beat Saber Boy