Reclaiming Community at BYU with Known 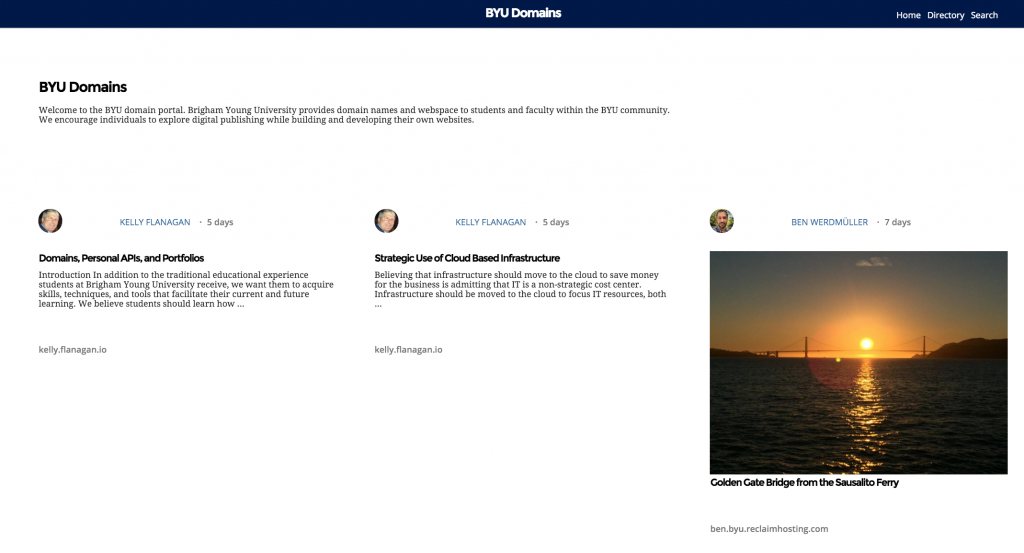 We’ve been really lucky at Reclaim Hosting over the last year two years to have had the good fortune of working with the good folks at Emory University, University of Oklahoma, CSU Channel Islands, and Davidson College. These four schools have believed in what we’re trying to do from the start, and they’ve been as much partners and collaborators as clients. What’s so cool is that it has not stopped with them. The work we have been doing with Brigham Young University’s IT department over the last 6 months represents an exciting continuation of Reclaim’s partnership with universities to help co-create and implement a vision of what’s possible. What’s more, Reclaim’s not working alone on this one, we have finally been able to get serious and work hand-in-hand with Ben Werdmuller and Erin Jo Richey at Known to make these visions a reality. But I’m getting ahead of myself here, let me back up a bit…

Last Winter BYU’s CIO Kelly Flanagan and Enterprise Architect Phil Windley came to UMW to find out more about Domain of One’s Own. They have been working on a broader project to define a University API across their campus, and they saw personal domains and web hosting as a way of providing students spaces to manage and control their data in a space of their own. Kelly Flanagan has recently written a post, “Personal Domains, APIs, and Portfolios,” that captures the spirit of their project, and pushes to the very limits of decentralized data ownership viz-a-viz a personal API:

Imagine a world where other sites on the web don’t hold your personal data, but instead request access to the data they need through your Personal API. Perhaps you grant them access to only the portions they actually need and restrict them from others. They use the resources they’ve been authorized to access, perform the business functions you desire, return results, and their access is revoked.

This is a perfect marriage with BYU’s University API project, and represents about as vast and ambitious a vision for fundamentally rethinking Higher Ed IT I’ve yet to come across in my 10 years of instructional technology. But actually creating such a vision starts in small, concrete ways. When we were showing Kelly and Phil Domain of One’s Own community site, that became a focus for BYU. They were very interested in building that for their pilot, and they signed on for it over the summer. The issue was the community site Martha Burtis and Tim built almost two years ago is beginning to show its age and neglect (less is not always more). Trying to reproduce what was created as a prototype at UMW for schools working with Reclaim didn’t make much sense. It wasn’t easily abstracted out; Martha has been promoted up to grander things, and we needed to come to terms with the fact that we aren’t software developers. We can help imagine and create the infrastructure, but we need to start brining folks into the equation who specialize in developing specific applications like this—particularly if BYU’s community hub is going to support the Personal API vision.

So, in late September Tim and I traveled out to BYU to have just this conversation around the Personal API, and how a re-imagined community hub might be the first piece of that puzzle. The trip was a great success for Tim and I because we made some real headway on the initial vision of an API-driven community site. What we came away with was not only BYU’s continued support  on this project—they rule!—, but also the go-ahead to bring in Ben and Erin of Known to start building BYU’s community hub on top of Known.

What does this mean exactly? Well, that’s the fun part. Known already has an API built-in, so if Domains at BYU “beings with the Known” (to quote the great Adam Croom) the entire experience changes. For example, what would it mean if when you signed up for BYU Domains the first thing you saw was not CPanel, but an on-boarding process that begins with the option of integrating your various social media services through Known. 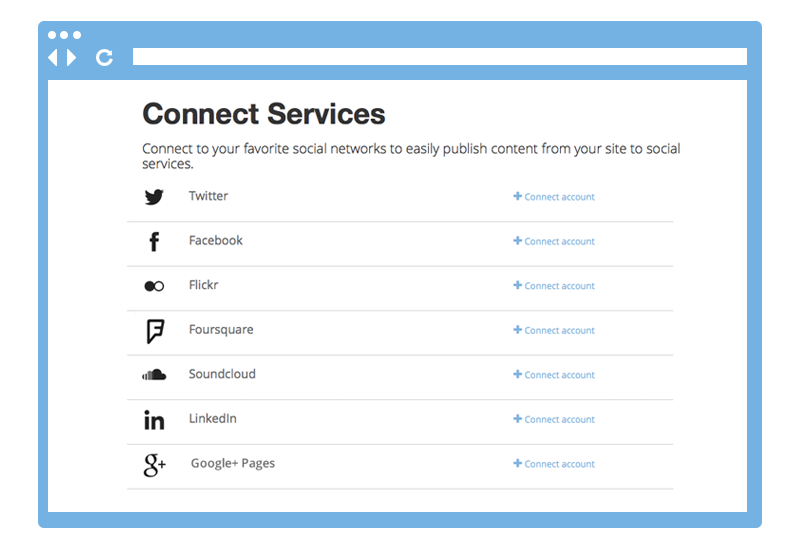 What’s more, once you have done that, you default to a page that is a quick and easy publishing space to send your various work to your social media accounts (the personal API at work already). 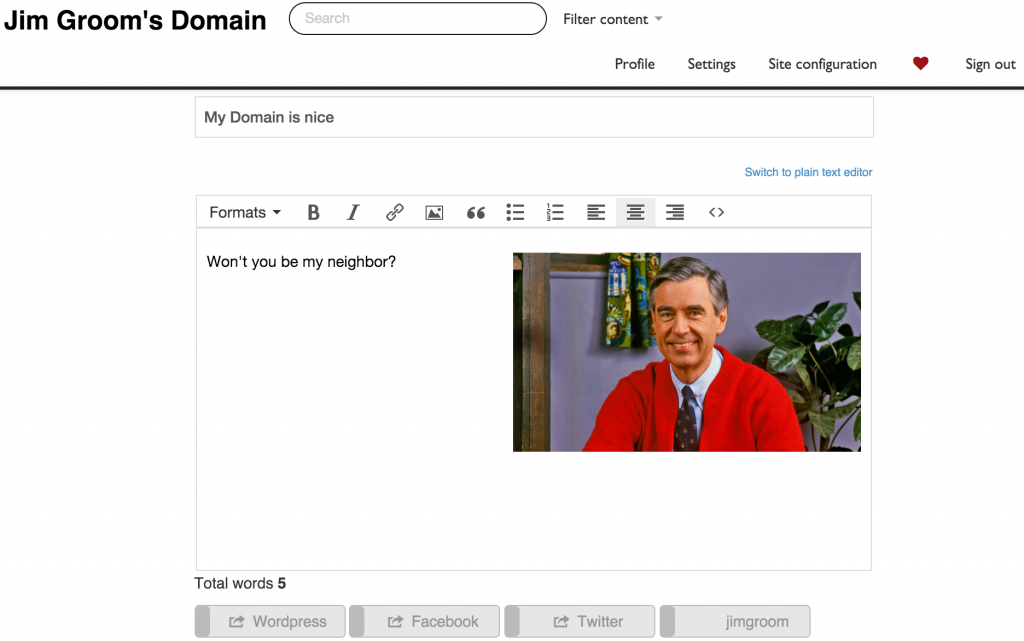 The Known Dashboard in BYU Domains

So, as you can see this post in the default page for my BYU Domain becomes a means of pushing to my WordPress blog, Facebook, Twitter, Tumblr, etc. All this being handled by Known’s Convoy, which does the work of connecting your domain with these various social media sites automatically. Now, by extension, there is no reason this can’t integrate with BYU’s University API. There could be buttons underneath the various post types that allow students to send their work to a particular class using something like Canvas’s API.

What’s more, built into each post are various privacy settings: Public, Members only (limited to the BYU community), and Private. [When talking to Tony Hirst about this, he recommended a fourth type called “off-campus” which allows students to post to their social media sites from Known, but not have it aggregated to the community site. I like that idea.] But where is this community site you speak of? Well, built into every students dashboard is a Community link.

And when I click on that I can see what is happening around the BYU Community within your stream. Not unlike Tumblr. You’ll notice my domain is now showing me Kelly’s post about Domains. 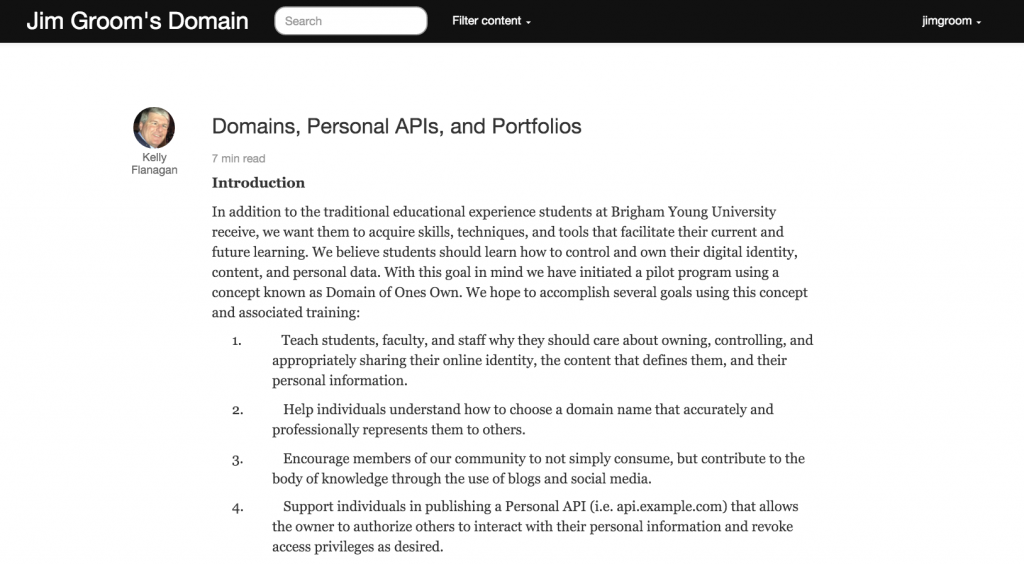 Posts from community read in my Domain

The reader is a view of the community, but ultimately much more once we get targeted data via APIs. it can be a view of all the posts from one course, all the post from your Facebook community,  all the public posts to Facebook from the BYU domains community, same goes for Instagram, Twitter, Tumblr, etc. (hence why the “off campus” feature in privacy setting could be OUseful). A targeted, community based reader of sorts that integrates course and distributed social media based on tags and data. A vision of aggregation heretofore only dreamed of in our edtech philosophy. 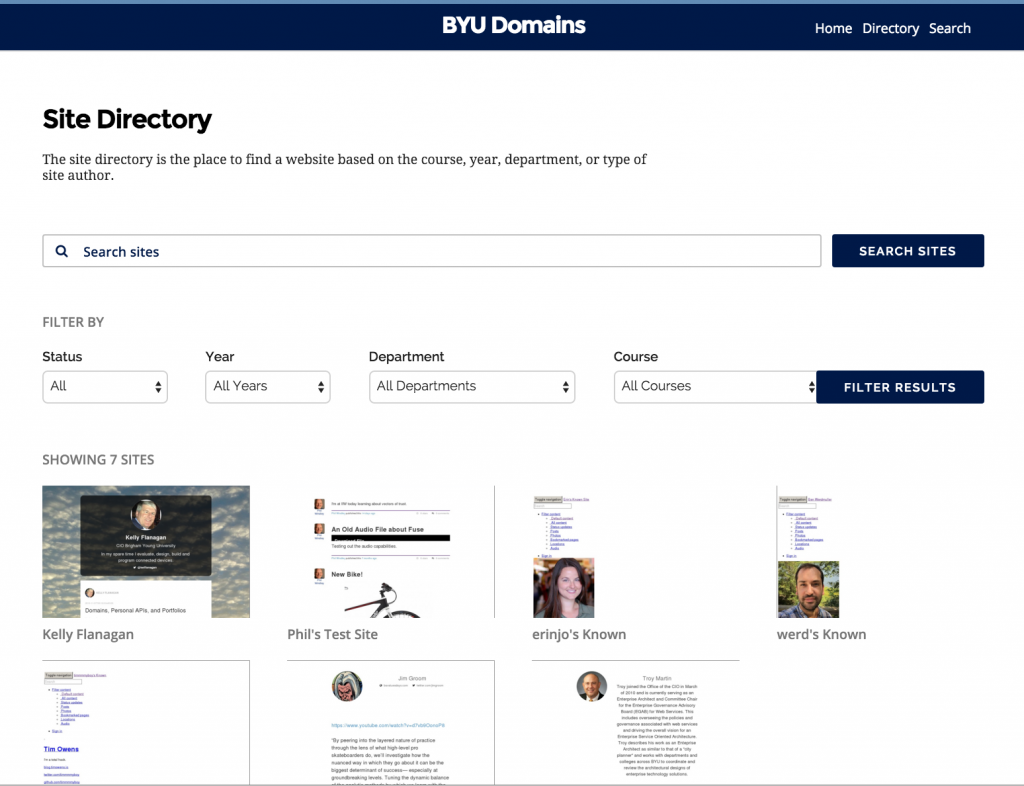 What some of those tags and features might be is loosely framed in the site directory feature of the BYU Community site Ben and Erin have built, but that is only limited by how BYU wants to use their University API to integrate with the Personal API.

The work Erin and Ben have done on the Community Hub for BYU is phenomenal, and this is just the beginning. BYU’s community hub provides a model that we can now abstract and provide to other interested schools, and partnering with Known on this may very well changed the way we imagine Domains not only as personal empowerment online, but also community engagement.

Now, having Known as the default interface for BYU Domains in no way rules out the ability for users to install other applications, subdomains, etc. We are currently thinking through what’s the best way to provide a quick and easy way to create subdomains or install WordPress, as well as a simple means of toggle to CPanel to work from there. That said, the switch could be a major one for communities used to working in CPanel, so we to think intently about what this means for the community at large, and what works and what doesn’t. But thanks to BYU’s willingness to experiment, we have a partner that is helping us work through these questions currently, and we may have answers to some of these questions as soon as January.

These are very exciting times for Reclaim Hosting. It cool to see the visions we’ve been courting as a community for years and years start to take shape in an actual application built upon the values of an open and independent web.

1 Response to Reclaiming Community at BYU with Known