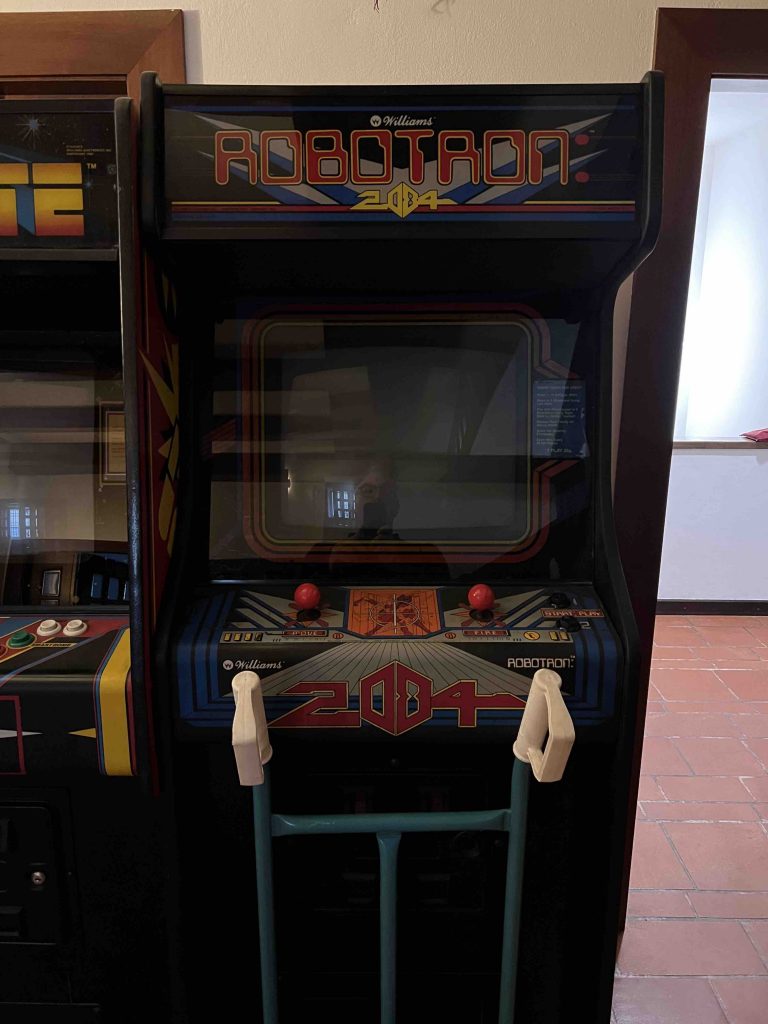 The bavaweekly was delayed a bit last week because I was busy adding a few more games to the home arcade, the post title says it all! I’ve been pretty restrained the last few months, but that couldn’t last. I’ve been looking for a nice Robotron cabinet in the US for a while now, and as with most things the prices are getting ridiculous. I saw a beautiful Robotron cabinet at Arcade Story in Vicenza last year when I picked up Scramble, so I decided to take the plunge—and was hoping for a better deal if I bought in bulk 🙂 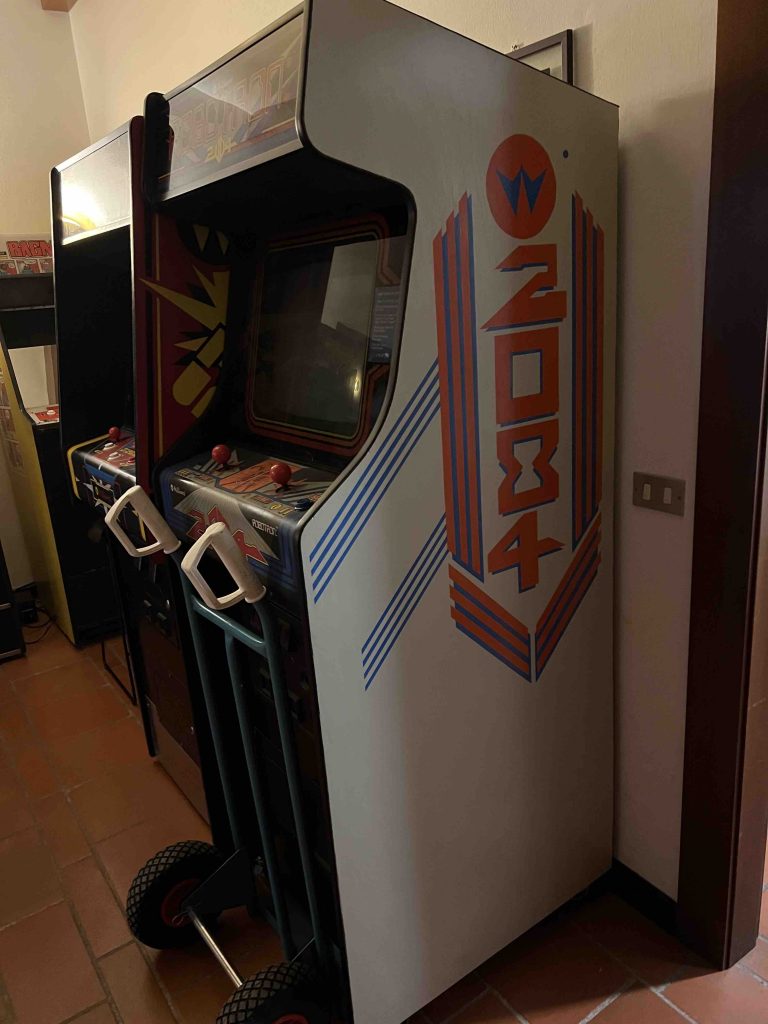 This Robotron cabinet’s side art was re-stenciled, and it looks like new

I am taking the Robotron boards back to the US this weekend (along with the Stargate boards—that’s another post) to get the once over, and I already got a couple of Williams switching power supplies, as well as Jamma adapters for Robotron, Stargate, and Joust that allow you to use a FPGA Williams multi-board (also known as a JROK) for several classic Williams games. At the end of the day the original Williams board sets are complex and expensive to fix (and even more expensive to get a spare), and after seeing Tim convert Q*Bert at Reclaim Arcade—which was regularly having board issues that got costly—I became a believer.  The games will still have all the original hardware, but for regular use swapping the boards and original power supply for a JROK board and switching power supply will allow me to move on with my life 🙂 Stargate and Robotron are the first two candidates, and when I get another two multi-game Williams JROK kits I’ll convert Joust and Defender as well. 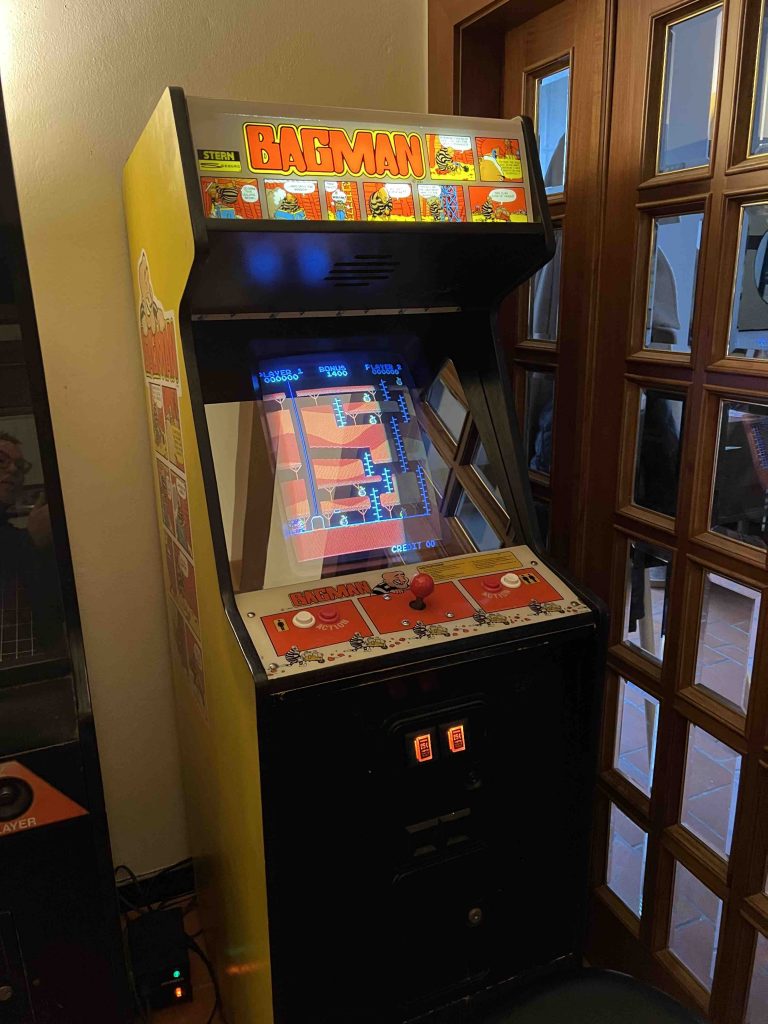 While seeing what Arcade Story had beyond the Robotron I came across a Bagman cabinet from 1982 that was also in really good shape (save for some slight water damage at the bottom and it was missing the original bezel). Bagman is actually a game I played only once or twice, but I am intrigued by the cabinet art and design and it would be yet another Stern game in the collection—that makes 4. I decided to get it and I plan on seeing if I can have the original bezel art reproduced on the new glass and also have someone here clean up the slight water damage and this thing will be mint. And as you can see from the image above the monitor is super crisp (all 3 games I got have G07 CBO monitors, which is a bonus),  and the marquee absolutely pops! 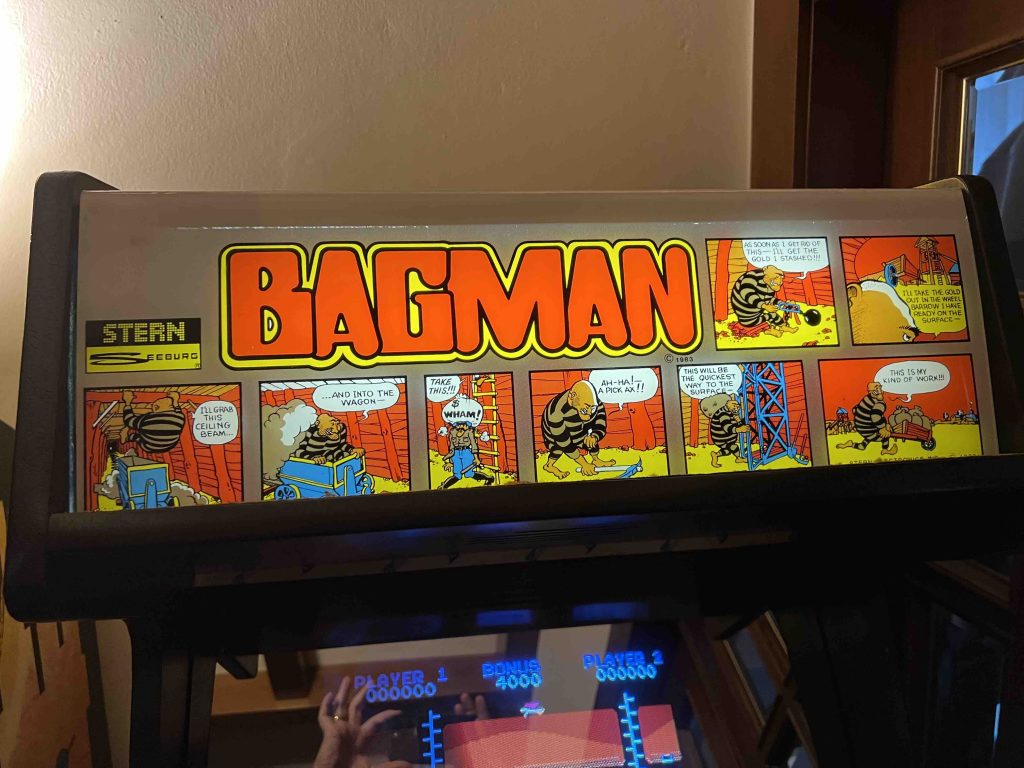 I am also intrigued by the dimensions and design of this cabinet, it is fairly narrow at 22 inches, but also deep and has a strange design in the back a single support but mostly negative space. I haven’t seen one like it: 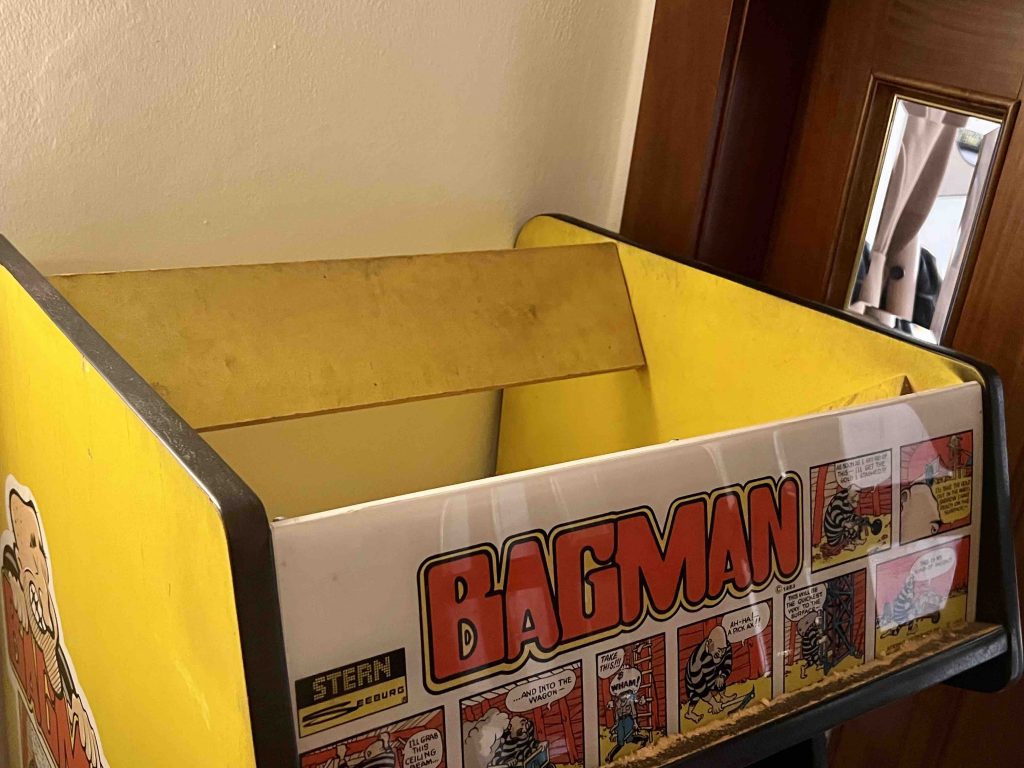 Strange design of the back top of Bagman cabinet

The final addition completed a trinity of Italian bootlegs of US video games that I am quite excited about. Last Summer I picked up Sidam’s Explorer (a Scramble bootleg) and soon after Sidam’s Asterock (an Atari Asteroids bootleg). The last piece of the puzzle (at least for now) was a Sidam Condor, which is a bootleg of Centuri’s Phoenix—an all-time favorite of mine. So, this near extinct Condor now has a new nest in the bavacade 🙂 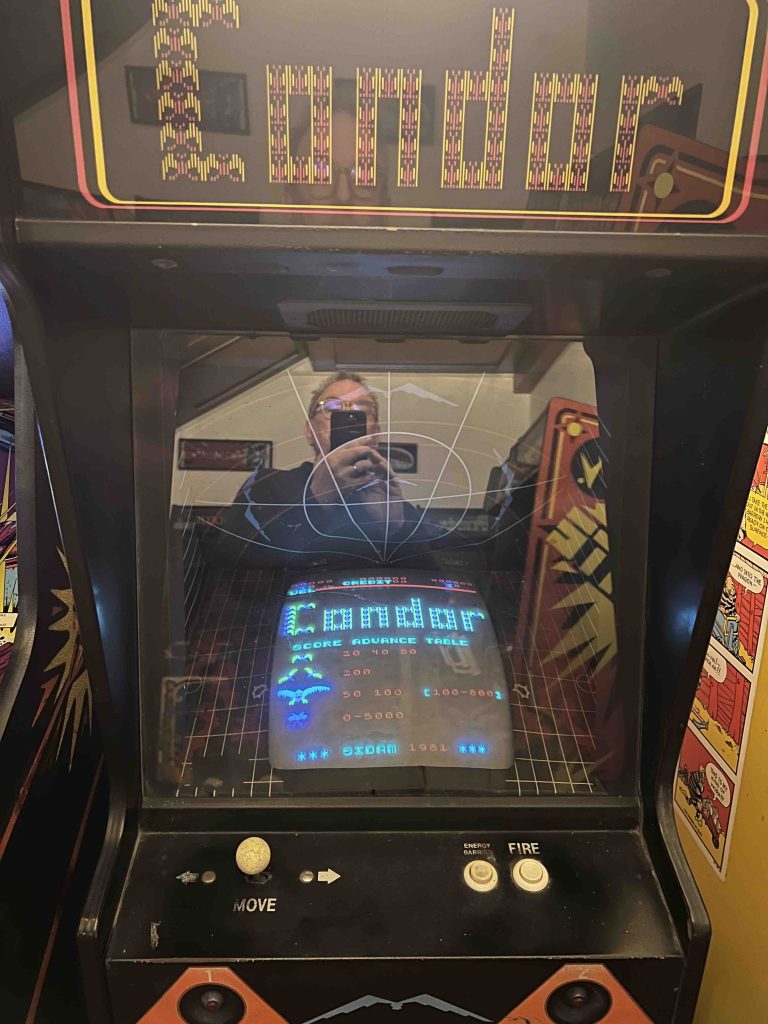 There is a bit of clean-up to do on the back of the cabinet where it was damaged, but other than that the actual cabinet is in excellent shape—much like the other two Sidam cabinets in the collection. I really do love these cabinets, they are a tiny bit smaller than their US counterparts, but the art is awesome and the whole idea of 80s Italian bootlegging of American video game culture fascinates me to no end. 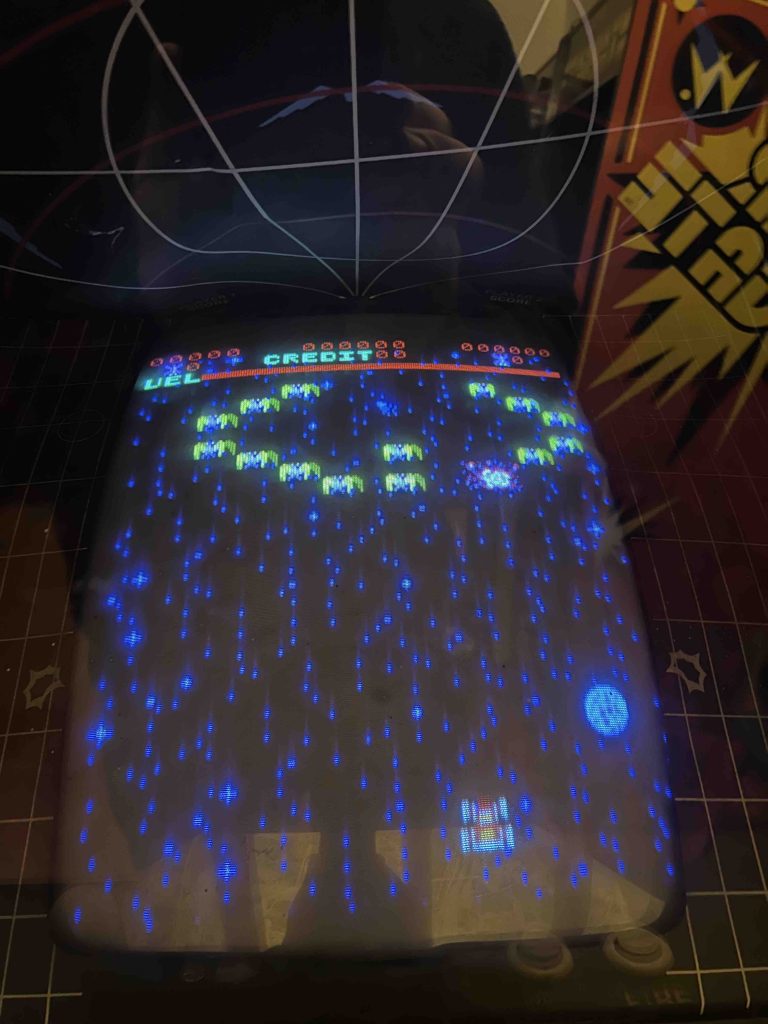 Color a bit off and F in Fuel got off

One of the things I read about Condor is that it was the first video game to have a fuel gauge. I’m not entirely sure that’s true given Rally-X had a fuel gauge and that was released in 1980, not 1981—so don’t believe everything you read. That said, adding a fuel gauge to Phoenix made an already difficult game 1000x harder, which is pretty crazy. One of the things I did as soon as I got this game is try out the extra board I had bought a few months back (I guess I knew I was getting this game eventually) only to find it was throwing garbage: 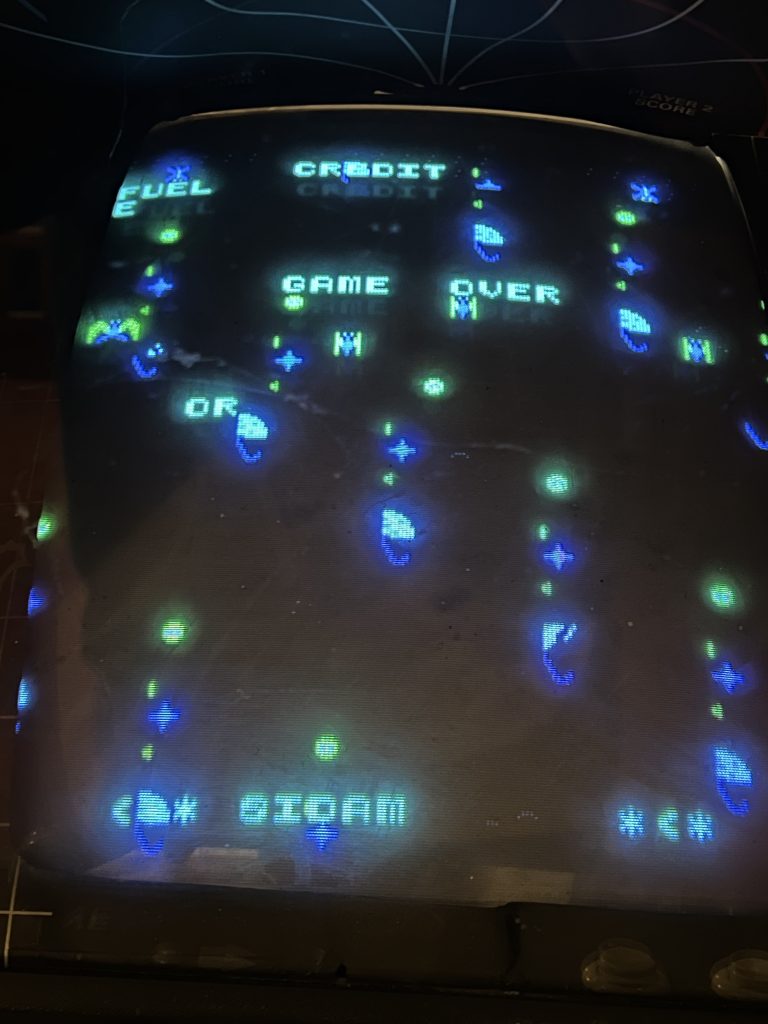 While re-connecting the old game board the edge connector that plugs into the game (pictured below) had one of the wires come off, although I did not realize this at the time. 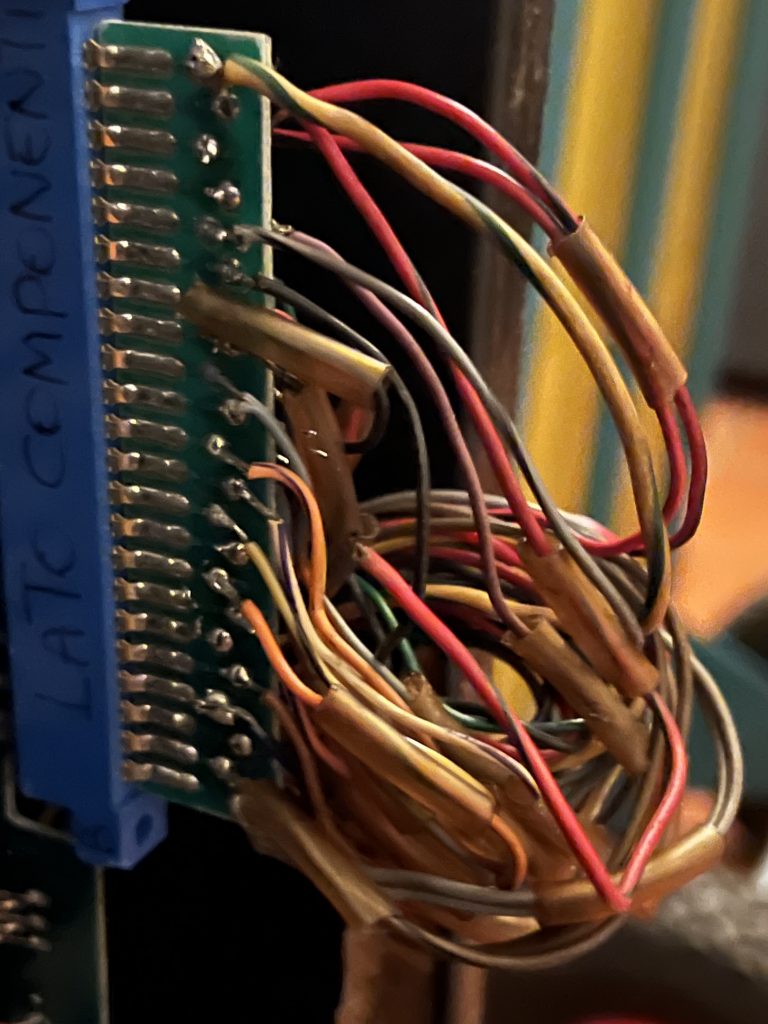 Condor edge-connector to game board

When the original board was replaced there was no red color: 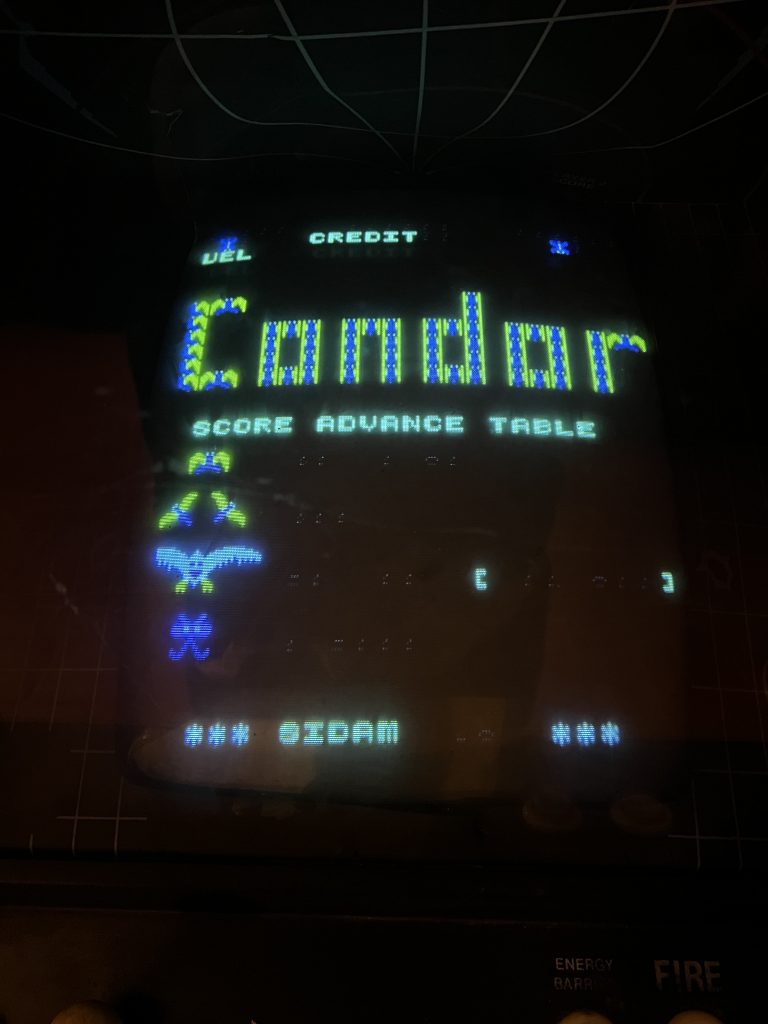 I played with the monitor colors a bit, but nothing worked. While re-seating the board I noticed one of the wires from the edge-connector harness had come off—the harness is a mess and needs to be re-done entirely. So, I went online looking for the Sidam Condor Manual (they are so useful!) and once I found it I tried studying the schematic for the edge-connector to see if there is a wire that connects the red color from the board to the monitor, and there was! 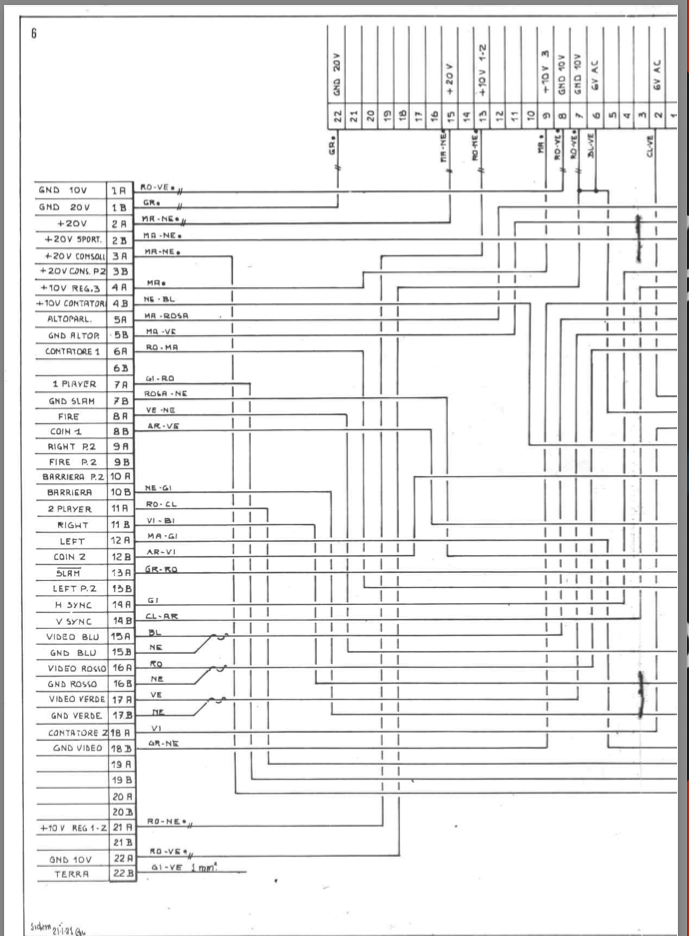 At 16A you see “video rosso” followed by “RO” which indicates the color of the wire. So a red wire at 16A is what sends the boards creation of red graphics to the monitor, and that was just the wire that had disconnected. So I soldered it back on, and the red was back in the game and I was freaking pumped! Every arcade fix is like Christmas morning. I say all this because it would be the basis of another fix over the weekend that I am still basking in the joy of, but more on that in the next post.

It was great to visit Arcade Story (Italy’s import/export mecca for golden age arcade games from the US), secure a few games for the bavacade, and spend some time with Miles, bavacade’s designated game mover. In fact, you can see him above enjoying the classic laser disc game Space Ace which, interestingly enough, is a joint venture between Atari and Sidam to release Space Ace and Dragon’s Lair in Italy a couple of years after Atari sued Sidam for bootlegging Asterock. 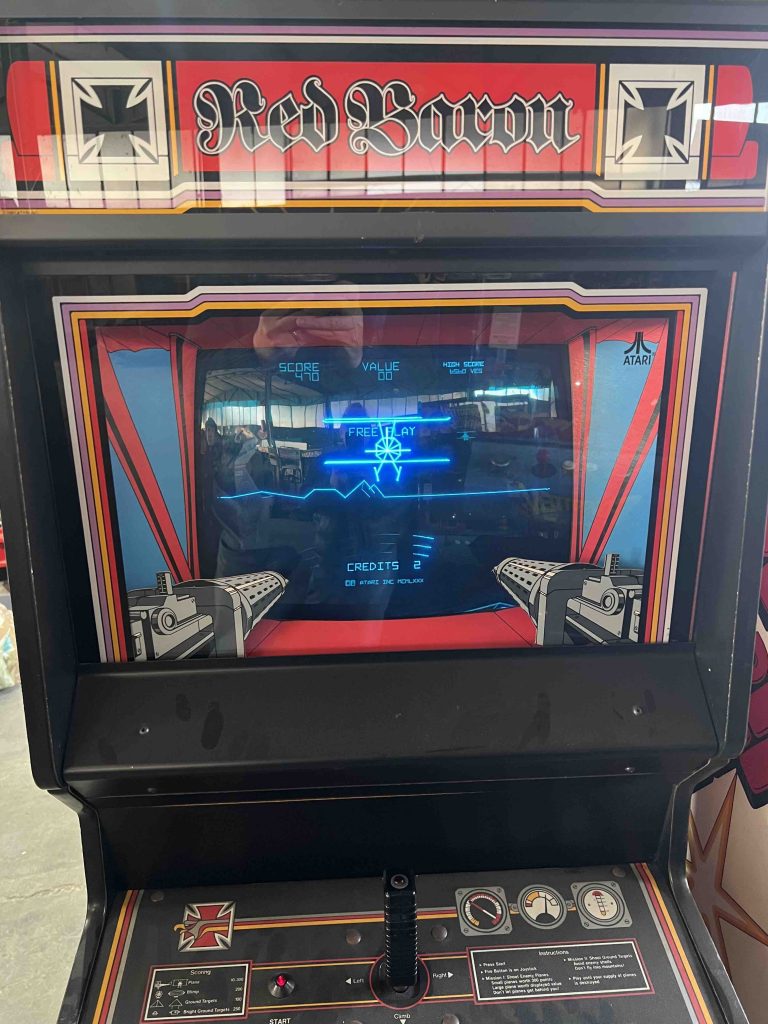 There was also a mint Warlords cabinet that is something to behold, and a Red Baron that I had never seen before, but after playing it can honestly say it is Battlezone, but better.

And with that, the bavacade slouches towards Bethlehem!

4 Responses to Robotron, Bagman, and Condor Join the bavacade