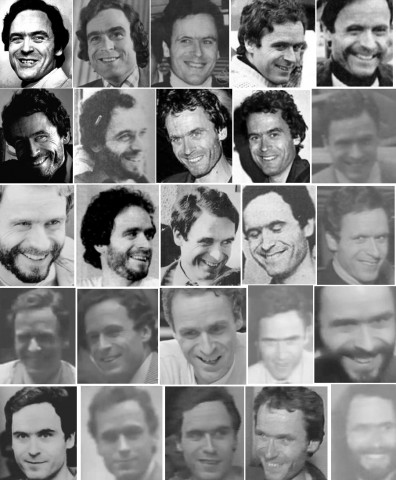 We finished up Ann Rule’s The Stranger Beside Me last week in the True Crime course. And while we read the graphic novel Torso which dealt with a series of related murders in Cleveland during the 1930s, the figure of an actual killer was vague at best. With The Stranger Beside Me you get a much more intimate portrait of a man who is regularly referred to by the author as attractive, brilliant, and even compassionate (Rule meets him at a Seattle crisis hotline). Running parallel to this storyline is a quickly accumulating body count of young, attractive women that are being brutaly attacked, sexually assualted, and ultimately murdered. As a result of this book you become all too familiar with the many faces of Ted Bundy.

It’s through this dichotomy between savage predator and urbane citizen that Bundy seemed to make such an indelible impact on our cultural psyche. Even in 1980 when this book was published, and Bundy had already been convicted of murder and sentenced to death, the term serial killer was not yet in popular use. The emergence of the figure of the serial killer is in many ways synonymous with Bundy’s heinous murders of the 1970s—and concomitant with the success of Rule’s book. He represented the frightening fact that insanity and brutality can also come in sheep’s clothing—the pretty face of an emerging cultural category that would find its apex in the 1980s. Interestingly enough, the Slate article  “Blood Loss: the decline of the serial killer” argues we have seen a decline in the number of serial killers since the 1980s, which may have been reinforced by the sensationalized media coverage of criminals like Ted Bundy, John Wayne Gacy, and Jeffrey Dahmer, to name a few. In could be argued that the 1990s and 2000s have seen the popular emergence of a new violent trend in the U.S.: spree killings. It is, unfortunately, pretty easy to rattle off a bunch of such incidents: Columbine, Virginia Tech, Aurora movie theater, and most recently Newtown—to name just a few. The sense of the arbitrary nature of these violent acts becomes just that much greater.

It’s hard to even conceive that one can understand something about a culture in such a shift of arbitrary violence? Part of the True Crime class has been about trying to read through the telling of crime to understand who we are as a culture at any particular moment—but I find it really hard for our moment. I’ve likened Bundy and the serial killer crazy to the emergence of the predatory capitalism of the 1980s, it’s a fairly trivial way to deal with such horrific arbitrary violence, but at the same time sense needs to be made. But how about spree killings? How do we make sense of Columbine or Sandy Hook? Can we?

I’m not so sure, but Forensic Psychologist Paul Mullen argues that it is part of an emerging cultural script that became popular during the late 1960s and has accelerated since. It’s not necessarily the idea that violent video games and movies produce psychokillers, but as David Dobbs suggest more discerningly when talking about the Aurora movie theatre shootings, “culture shapes the expression of mental dysfunction.” And in the U.S over the last 10 to 15 years that culture seems to be framed by “a right-wing, militiarized expression of violence” to quote Mullen. While these arguments don’t explain the horror, the do try and drill downward and take a broader look at the cultural conditions that make this possible. And, ideally, a space to try and deal with them beyond more violence, executions, and prisons.

This entry was posted in True Crime and tagged serial killer, spree killer, Stranger Beside Me, Ted Bundy, truecrime. Bookmark the permalink.

1 Response to Serial Killers to Spree Killers: a Cultural Shift?