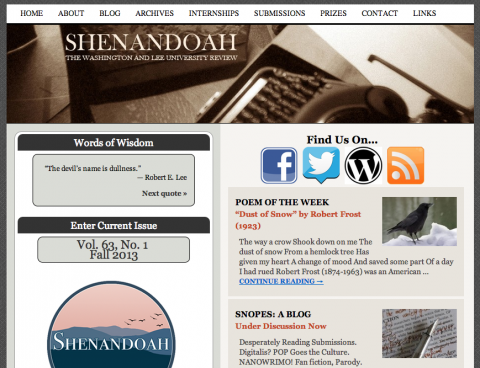 Washington and Lee’s Literary Review Shenandoah started making its transition from a print to an entirely online publication almost three years ago. I know this because I helped the editor, Rod T. Smith, imagine what it would mean to move into the online world. I’ve blogged about this a few times before. Three years later I’m still working on Shenandoah, although its pretty much run itself for the last two years. I remain involved because it’s one of those compelling testaments to the awesome contemporary culture you can access freely on the web. The latest issue is just the most recent example of what’s been freely published online since Fall 2011 (five issues in all, and the sixth comes out this Spring). 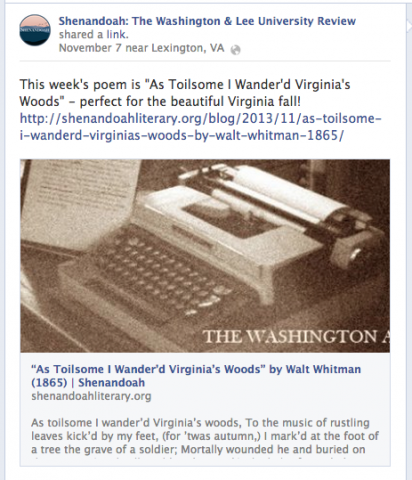 But what I wanted to mention here quickly is that this semester the site, issue, and blog had a different vibe than I’ve seen so far. The student interns who helped run the journal as part of a course started to really take over the site. They pushed the various weekly and daily features hard on social networks like Twitter and Facebook. The “Poem of the Week” became a staple on Facebook, and drove regular traffic to the site that led to more people discovering the most recent issue. They also did an amazing job taking turns to make sure Shenandoah‘s blog was regularly updated with their thoughts and insights about the state of literature.

They also did an excellent job populating the “Words of Wisdom” quote generator on the frontpage with some awesome quotes. 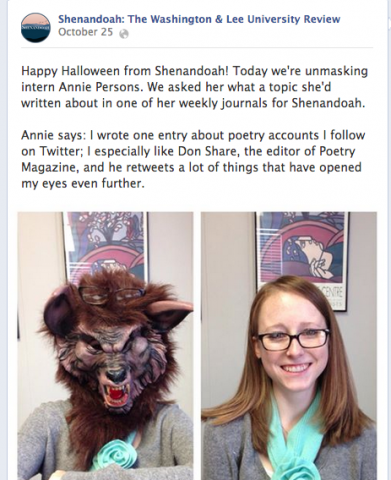 The site has started to take on a sense of vibrancy that seems directly related to the students’ engagement and excitement. The way they used Facebook, for example, was awesome. The did Halloween “unmasking” posts that featured each of the student interns process while preparing for the launch of the latest issue. They were compelling because they framed a person’s experience bringing this issue to life. What’s more, it highlights how a digital literary journal like Shenandoah can be effectively promoted through social media. These students literally doubled the traffic to Shenandoah over the coruse of the semester, and they seemed to have a lot of fun doing it while gaining invaluable experience for publishing in the new world. We can talk all day about the technology and platforms (which I understand the importance of given my own purview as a technologist), but nothing can replace the excitement and passion of a group of students to make something feel special and relevant. Their takeover of the site this semester gave the online features soul, and kudos to Rod for letting it flourish.

Turns out Shenandoah is not only a gem for the contemporary literary world, it’s also a gem for teaching and learning in our digital moment. I’m really enjoying this because what could have (and for many was) been seen as a loss might now be understood as a rebirth of open access literature, enagagement for the publication, and  empowerment for the students running it. Very cool.

This entry was posted in Shenandoah and tagged shenandoah. Bookmark the permalink.