One of the quiet wins we had in DTLT this semester was moving UMW Blogs to Amazon Web Services. It was essential because this platform was quickly outgrowing the limits of a dedicated server. In fact, if it weren’t for Tim Owens‘s fancy footwork to help us scale the system, it may not have made it. Since the move it has worked beautifully, and we had no major issues the entire academic year.

One of the concerns we had throughout the year, however, was the cost. One of the reasons folks were scared of AWS is the fact that you pay monthly based on usage and resources rather than a fixed cost for a dedicated server. The idea of metered usage of servers, server infrastructure as a pay-per-use utility, is still a foreign concept for most IT units, not less purchasing! The lingering fear was that one month something would go wrong and the costs would skyrocket and our server budget would be eaten up in a month. While that could happen, there are all kinds of billing safeguards that make it fairly difficult.

What’s interesting it to look back over our first year of usage in terms of costs to get a sense of how the system has become to find a rough monthly average in terms of costs. In the early fall we were running fewer EC2 instances, which meant the price was lower although the site was not nearly as fast. In November Tim rolled out four load balanced EC2 instances, and that was a brave new world. But as you can see from the costs for the EC2 servers in December and January, we had to dial back some of the settings because those two months were more expensive than we had planned. We needed to remain around the sweet spot of $550-$600 a month for this set up to be cheaper than what we were paying for a dedicated server, which was roughly $8500 a year. 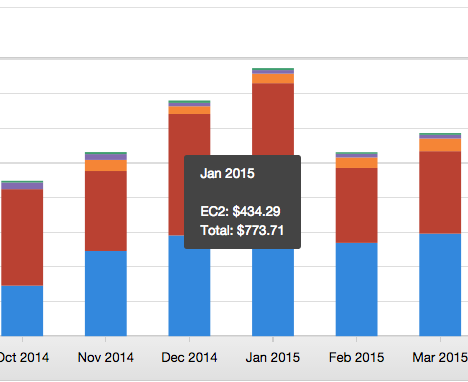 As you can see from February through June, we accomplished that. we averaged about $585 for those 4 months, and we had a completely stable system. The trick to managing AWS is having someone to experiment and mind those use patterns over the first year and tweak and perfect the setup. If we had more resources allocated for UMW Blogs we could certainly spend more, but such an exercise of managing to a budget is probably a good idea with AWS because it forces you to make sure your setup is tight. If it isn’t, you could keep throwing EC2 instances at the problem and spending a lot of money and still have a very fast, but quite expensive, infrastructure. Like anything, it takes good people who are willing to experiment and have an idea of what they are doing—or at least are willing to learn while they are flying!

This entry was posted in AWS and tagged AWS, umwblogs. Bookmark the permalink.