While it’s September, any calendar following fool knows that Summer ain’t over for another couple of weeks, and what better way to reflect on one of the best Summer’s for me in a long while than talking everybody’s favorite denizens of the deep: sharks.

I mean, I love sharks—and I love them because I am so god damned afraid of them. Just this June and July while swimming and playing with my kids in the Atlantic Ocean off Montauk Point I couldn’t get the idea out of my head that they were there with us. Stealthily watching us with those reversible black eyes and untold rows of teeth, waiting to strike. And that made the ocean that much better, not some sterile experience that has become the standard for family fun—but the potential for a real, live blood bath. Not that I want one, but I do want to know it is still possible.

And when I see videos like the following one I found on the internet —along with the sheer volume of insane shark videos on the internet—it remains a strong barometer of just how strong the seduction of the shark fetish started in the ’70s has had on our culture for 35 years now.

Me my Shark and I from Chuck Patterson on Vimeo.

How crazy is this guy Chuck Patterson’s “Me my shark and I”? Not only does he see a Great White the day before, but he realizes he forgot his camera so goes to the same spot at the same time the next day to catch him again. What a beautiful nut!! People like him, not corporations like Google and Apple, make the internet magic.

While I was swimming around the internet trying to spear more stuff about sharks, I found this crazy Wikipedia article that provides a List of fatal, unprovoked shark attacks in the United States. And what’s crazy when you look at that list closely, is that in 1916 Jaws did live on the Jersey Shore, chomping 4 people in less than two weeks. Crazy! One of the other interesting things I discovered from this list, and I’ll have to double-check it before I get too confident in NY waters, is that there has never been a fatal shark attack off of Long Island. I guess that’s why it’s the strongest island, while on the other hand Florida and California are veritable smorgasbords—and North Carolina ain’t no slouch either—damn Bull Sharks!

That gave way to this comical take off in Megashark…

Which led to this brilliant, physics-based info-graphic (via Tom Woodward) 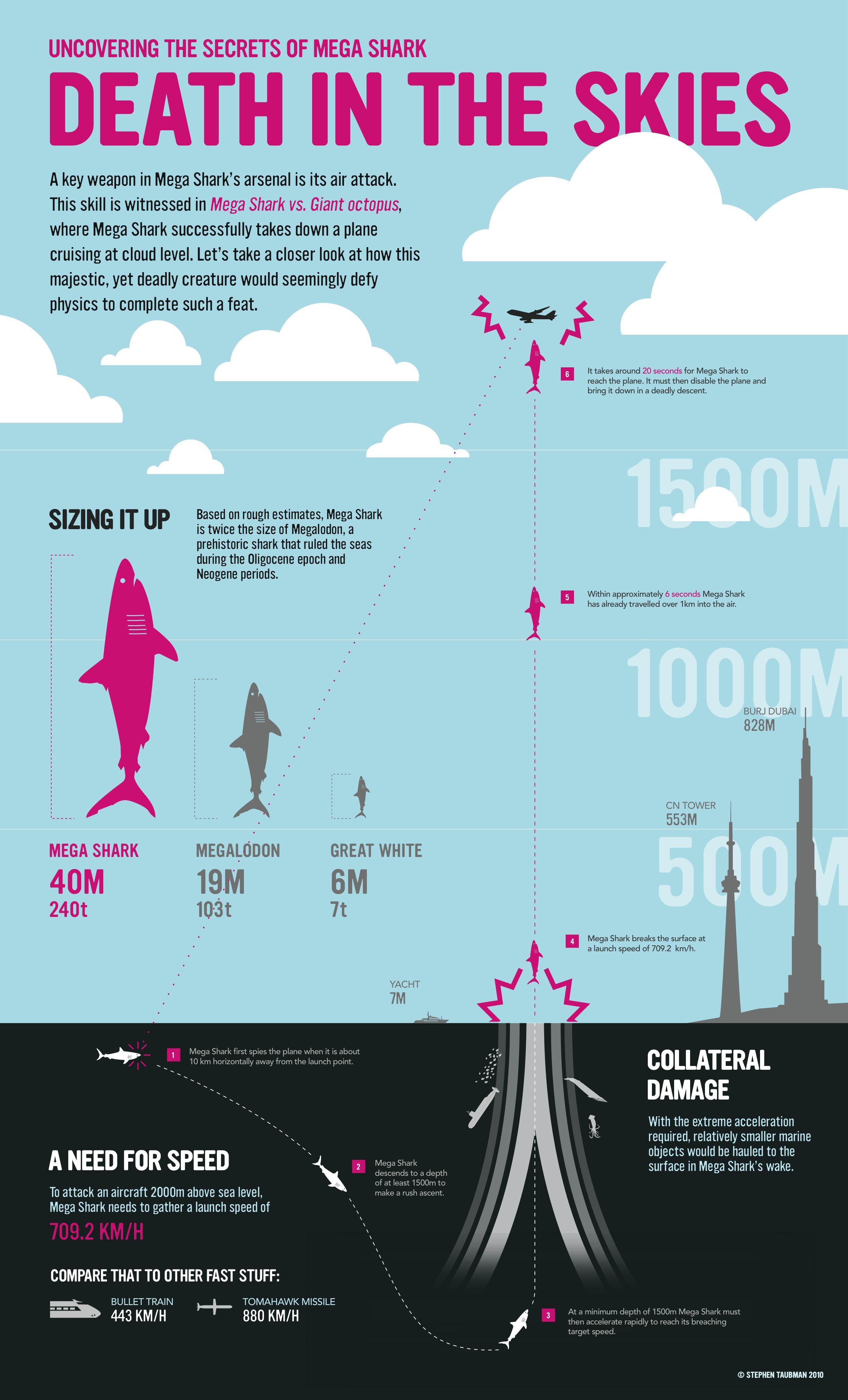 All of this makes me nostalgic for the time when I was serious enough about my Shark fetish that I had applied, and been accepted, to study marine Biology at the University of California, Santa Cruz (a well known haunt for Great Whites, just ask any surfer at Steamer Lane). I was minutes away from going, but then a love changed my path irrevocably. And while I don’t regret a thing for that relationship and my time at UCLA were both formative and indelibly shaped me as an adult, I do think back to those days in 1991 and 1992 when anything was possible for me, and I would spend my time poring over the art of Richard Ellis. 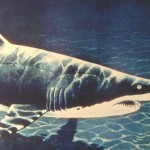 The Book of Sharks was my favorite book at the time, and while going to junior college in Long Beach, California (which was an amazing experience in its own right, and one I need to post about—the California public higher education system was still a very beautiful thing in the early ’90s), I would study his loving portraits of the various types of sharks. Pausing over the haunting image of the Great White heading to the surface, just imagine the legs that he has keyed into. But being sucked in my the beautiful image of the Sand Tiger Shark on the cover, the way in which the water diffused sun reflects on this beasts back is gorgeous. And the scene reminds us just how shallow that water is. 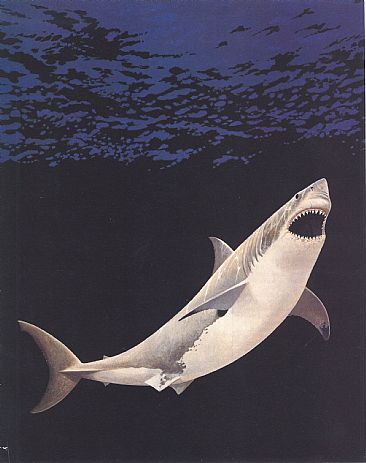 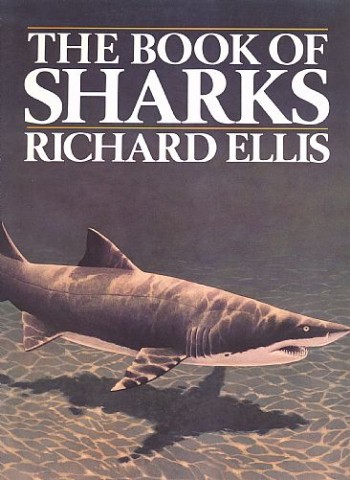 And all this brings me around to the first day of class for the Digital Storytelling course this semester when I tried a little experiment. I basically asked every student (all 28 of them) to tell me a 30 second to a minute long story from their Summer. And, interestingly enough, they not only did it, but it immediately told me so much about all of them. Who they were, how they communicated a story, what they were interested in, what they weren’t, etc. It was a great opening exercise, and it many ways sets the tone nicely for the course, because this is what will be expected of them throughout the semester, albeit through a variety of modes and mediums.

So, building on this, one of the students, told her story about the fact that she watches and re-watches Jaws every year before her and her family head out to the beaches of North Carolina, as a way to build up anticipation and get in the mood for the always already present possibility for carnage 🙂 Well, her story ultimately ended on a nit that she spent her days at the beach collecting shark teeth, tons of them, real, live physical artifacts that in many ways materially symbolize the multi-level, serrated points of our fear. So, inspired by her story, and connecting with it on a deep level for all the reasons I tried and illustrate above, I posted one of my favorite stories of all time, the classic monologue by Robert Shaw in Jaws in which he brilliantly narrates the sinking of the U.S.S. Indianapolis, and the subsequent shark-inspired horror that ensued. At the same time, I asked the students to share an example of a story from pop culture or literature that remains with them and why. How is this story somehow representative for them?

Well, that self-same student, Sarah Manual, who told the story about collecting shark teeth on the beach, posted a response to my rather quick and paltry post about this scene, examine it closely, and through her copious external research on Jaws, explained quite brilliantly why this scene was not only the best in the movie (which I agree with) but also in many ways saved the filming of it. Here it is, in here own words from her own blog:

Still, I learned about this scene and how particularly difficult it really was to shoot. Not only was this scene rewritten by several screenwriters and actors, but it was emotionally draining for everyone to execute, especially Robert Shaw who had the daunting task of representing every man who survived the U.S.S. Indianapolis. Anyway, so here’s what’s so incredible about this scene. We see absoutely nothing, and yet, the scene is chilling. All the viewer sees are the expressions on three men’s faces. This one scene, the documentary revealed, was what gave the entire movie real hope, because up until then it seemed like nothing was working. Scenes on the ocean were impossible to shoot, the mechanical shark NEVER worked, and the director, producers, and actors were constantly threatened by deadlines and overspending. This scene changed all that. It was the breath of life in a drowning film. After this scene was shot everyone felt renewed, and began to believe in the film.

What makes this scene so representative of the movie is what made the movie work so well. Due to malfunctioning mechanics and pretty bad special effects, there wasn’t really a lot of footage of the shark. This happened to be a real blessing in disguise for the movie. Quint’s monologue here proves that what we don’t see is actually more frightening than what we do see. The unknown is always scary; that’s why no one likes the dark!

And check out Sarah’s blog, deep sea horror all the way, and once again the ability for your own space to reflect your own interests remains paramount for me on the web. More than that, I could’t ask for a better way to start this semester, right off the bat, this is what blogging is all about. This is what we do, and this is why it is not only important, but fulfilling. It is where we tell our own story.

I’m getting pumped up for ds106 this semester, and I am ready to bring it right along side them with the baba, because if you ain’t in it too, than what the hell are you talking about? This Reverend practices what he preaches.

7 Responses to Summer of Love: Sharks