This post is part of an inadvertent series of posts about my attempts to fight various media companies claims of copyright infringement on my uploaded YouTube clips. You can see part 1 here, part 2 here, part 3 here, and part 4 here for context. 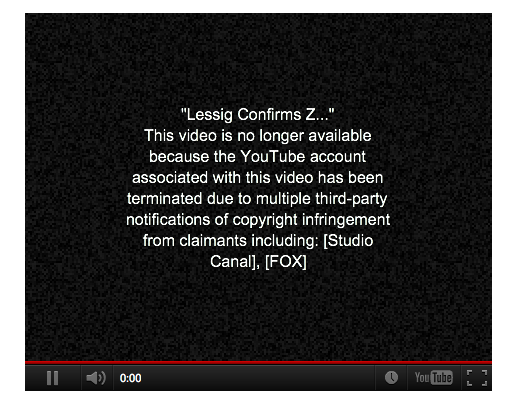 I thought I was making a little bit of headway with my YouTube battle, but it seems that I was sorely mistaken. This morning I got two claims against by account from Studio Canal and Fox for an Escape from New York clip and a Grapes of Wrath clip respectively. I can’t say I am too surprised that Google would shut down my account, and I didn’t backup many of those videos but I’m not overly concerned about that. Much of this stuff is ephemera from me, and there are other means to get clips from films and upload them to the web. What’s more, I didn’t have too much truly personal stuff (family videos, etc) up on YouTube, much of it was an archive for my thinking through this blog, and I’m pretty sure I can reproduce most, if not all, of what I uploaded. The real issue for me is the lack of any real due process. The three strikes you’re out mentality to the copyright game we’re playing online with our culture is extremely draconian and seems designed to end sharing as we know it. Check out the last two emails I just got:

And a couple of hours latter I get this, 3 strikes buddy, you are out!

I won’t claim to be an innocent victim, or pretend that I had no idea this was coming. I very much understood what I was doing, and I also wanted to push back on these constant threats from media companies delivered regularly by Google to my email address to see what kind of negotiations were possible. What I found was even after losing my account there’s been absolutely no transparency to the process. The corporations making the claims are entirely in the position of power. They decide what’s fair use or not, and they decide what constitutes a violation or not. Google plays the role of an errand boy sent by various media company grocery clerks to collect a bill—-and what’s odd about that equation is that they are the biggest media company of them all. It’s been a decade-long, coma-like love affair with Google as gateway to our memories, ideas, and creations, but at the end of the day they are just as invested  and complicit in barring the general public from any means of creation and expression when it comes to the minefield of digital media and copyright in the 21st century as any other media company out there. Evil will be done 😉

I love that last bullet point, it kind of says it all: “Terminate an account, at any time, for any reason, with or without notice.” Is this who we are giving all of our data over to? And while they terminated my account for a reason, it’s my theory that the fact has not created within Google (or any other company that controls your data) any sense of obligation. On the contrary, they reserve the right to do whatever they want whenever they want. Scary.

I thought I would feel a bit more gutted and enraged at the idea of losing my YouTube account, but in the end it’s liberating. Fuck the arbitrary arbiters of copyright, they’re no friend of freedom! The bava will abide.

13 Responses to Terminated with Extreme Prejudice