YouTube: You lose most, you win one by default

As I blogged about earlier this week, results of my challenges to YouTube for more than 40 videos have been coming in, and for almost a week I got nothing but rejections (25 in all) of my claims of Fair Use—that’s all I got, a rejection. An simple email with a “dispute rejected, copyright claim re-instated.” No explanation, no nothing.

I was beginning to think this was every media company’s stock reply until today when I actually got a “victory.” eOne sent me an email telling me that the claim against The Tree of Life clip I put up from Terrence Malik’s masterpiece was being released. What?! Why? How can you!!! I was beginning to shape opinions here!!! 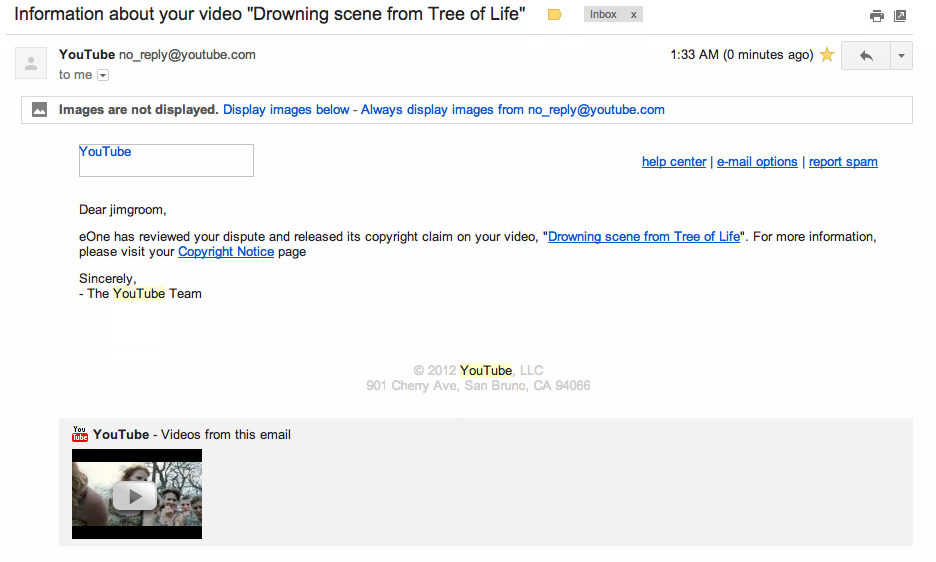 Still wondering if eOne (rather than NBC, Warner Brothers, etc.—who flat our rejected all my claims) backed off because they were feeling sorry for a poor educator trying to teach the ignorant kids some good old fashioned Kulture?—highly unlikely. Or maybe it was because eOne was forced to come to terms with the fact they didn’t ever have the rights to claim to begin with? Parasites. But say what you will about parasites, they at least released their claim, it’s those who believe they own our culture that are the truly deluded and deleterious.

Can’t say archiving my YouTube stuff has started in earnest yet—this week! I promise! I don’t believe these crucial issues for our culture should play out on YouTube’s server turf through this cloak of veiled corporate constable. I want public space on the web we can claim and articulate this argument more freely.

4 Responses to YouTube: You lose most, you win one by default