The Art of OERxDomains21 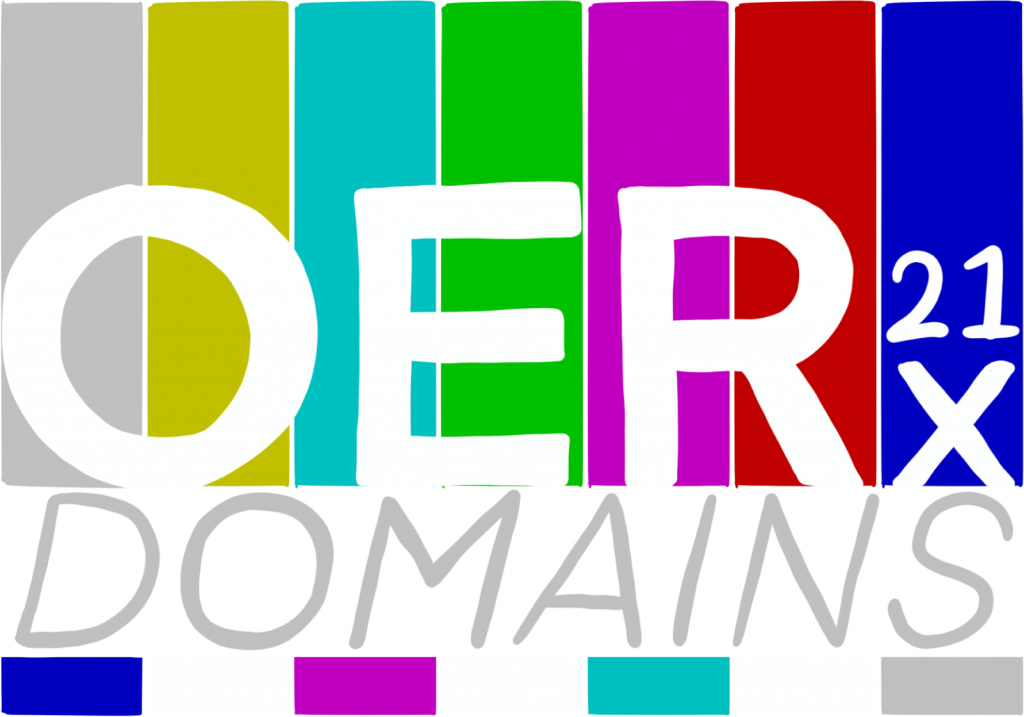 I am realizing I have not blogged that much about OERxDomains21, and given we now have less than a month to conference time, it is high time to change that. We have a lot of awesome things in the works, and with a preliminary draft of the conference program live, you can get a sense for yourself just how sick it is going to be.

Its exciting to see how many folks are joining us for this event, OER has become my favorite event over the last several years because of all the awesome people, and once again they’ve shown up ready to bring their A-game. YEAH!

When I say #OERxDomains21 do you think of Ryan Gosling? Slides for my talk will use a pink font… https://t.co/fDBdvgc3sZ pic.twitter.com/jh4jG6xlTw

And there is a special feeling of excitement when folks like Eamon Costello want to have fun with the aesthetic we’re exploring. That is what it is all about,  and it will surprise no one to hear Bryan Mathers is behind those awesome OERxDomains21 animations you may have come across when seeing news about the conference. But if you haven’t seen them, well you are in for a treat, here are a few, the first highlighting the 80s neon aesthetic that Eamon references with the awesome Drive reference in his tweet. Synthwave, baby!

And there are also the test cards that are in many ways the defining aesthetic of the conference.

And finally we have my favorite, the Videodrome-inspired outtro wherein the viewer is consumer by the TV:

In fact, we had a rough idea the conference aesthetic could be framed around the retro TV idea when we approached Bryan to chat, but as usual he takes your ideas and not only fleshes them out but elevates them to the next level. The TV made sense given we knew this year would be online and video-based, and we want to give people a sense they could tune-in and out. And we knew we would have several tracks, so using the metaphor of channels was enticing (but more on that later on). In fact, we wanted to pre-record the Domains21 track entirely so we could free-up technical attention for the the two live OER tracks. It was a practical decision to balance workload and potential issues with live streaming—always having a pre-recorded channel to fall back to if there are issues is comforting. But an unexpected treat that came out of this thinking were the resulting animated intros and outtros for the Domains21 pre-recorded videos that are now awesome animated Twitter promos for the conference that gives folks a pretty powerful sense of what’s to come, as Eamon Costello demonstrated brilliantly. I’ve been using these intros and outtros during the production of the 25+ pre-recordings I am working through in Streamyard in an effort to make sure there is as little post-production work for these sessions as possible.

And the TV and all its surrounding artifacts have become fodder for a really cool metaphor. As the Open Community Production subtitle suggests, we wanted to play with the idea of public access TV, this is also present with the person be sucked into the TV outtro 🙂 But more generally, we wanted to try and capture a sense of a moment when there were just a few channels to choose and we all shared a limited sense of time and place within the glow of the CRT. The tracks become channels on a TV allowing folks to switch seamlessly between the various sessions, it is channel surfing in 1980!

Around the same time we starting considering where the TV would live and how the page would load. This led to discussions around ensuring the site doesn’t crash—that would not be a great look for Reclaim Hosting. I mean this vendor is putting it on the line!  The current OER conference site is running on WordPress, which is right up our alley, but Tim and I liked what the folks behind the Against Surveillance teach-in did with their website, they kept it a simple HTML page with the YouTube video embedded. If your page only has  HTML code and decent caching you can altogether avoid most load and database bottlenecks. If we couple that with seamless scaling on Reclaim Cloud we should be all set.

But once the idea of a straight-up HTML page was considered, we then got to thinking this would be a good use-case for some headless action. In other words, allow folks to add and edit speaker and presentation info using a WordPress backend, then pull the data out of using the WordPress APIs and pull it into a HTML/CSS/Javascript site with the video player. All the data will be entered before the conference, and any on-the-fly changes can be done in a way to minimize load and only pull when there are resources. this would ensure both the program and video player page can load reliably no matter what the traffic is (not to mention we can always point folks back to YouTube links should there be any issues). That’s great, but we had this idea with just 6 weeks until showtime, who you gonna call?  The A-Team! 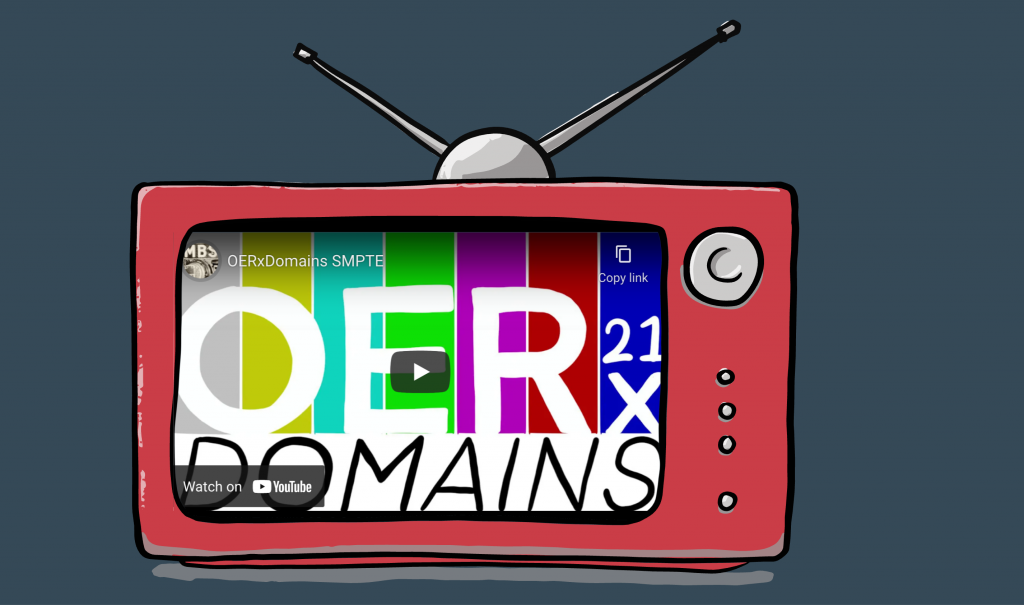 It helps to have a deep community, and immediately we thought of Tom Woodward to get the WordPress types pulling cleanly to a JSON file that Michael Branson Smith could use to build out the player and add the data with his mad HTML/CSS/JS skills. So good, and as we got to talking through the possibilities idea of creating the program/schedule as a TV Guide came up and it felt immediately like the front and backend of the conference platform was sealed. Artists on all sides!

The beginnings of a TV Guide program

The program is a work-in-progress, and we still have to do some testing and make sure all bases are covered, but I have to say watching this come together so quickly with so many folks I deeply respect has been a highlight of the process, the other highlight has been recording the awesome folks who will populate the Domains21 channel! If you look at the image above with the Player One and Player Two buttons try to imagine each of those buttons as a Conference sessions within a broader schedule page designed like a TV Guide. So, when you click on a session at the proper time you are taken to that channel of the TV. If you click on it before the time, we are figuring out if it should take you to the current session playing on that channel, which I think would be fun cause it allows for serendipity. These are things we still need to work out—but so far it seems pretty doable. And, returning to the Against Surveillance site, one of the elegant bits we love is how the video is immediately archived with a nice thumbnail with all the relevant data, which then lives on as an archive in perpetuity—however long that is. We will be able to do that for all 100+ sessions almost immediately with no extra work, which is insane. So the TV Guide/Program will live on as an archive of the conference moving forward, which I totally love. And thanks to the youtube-dl code we can ensure all the video and metadata are backed-up elsewhere in case YouTube gets cute, never trust our digital overlords!

I do need to blog a lot more about using StreamYard, but Tim, Lauren, and I spent close to an hour testing out all the possibilities and it really allows us to do everything we need—which is both awesome and a relief. I’ll try to blog that in more detail soon given if I don’t it will fade away into the rush of running the conference. What’s more, if everything works out I would love to have a post-conference chat with MBS and Tom Woodward about building the headless site because I really dig it, and it reinforces my belief that working from an aesthetic in many ways gives you the metaphors you need to get creative with the delivery, let the artists lead the way! But until then, go get registered for the TV event of the year 🙂

2 Responses to The Art of OERxDomains21