The Bullet to UMW Blogs?

I’ve been dying over the last two years to bring UMW’s The Bullet (our student-run newspaper) into the UMW Blogs fold. It drives me crazy that it’s hosted by the local Fredericksburg paper, particularly because they suck so bad. The site layout is horrific, and it pains me whenever I think what might have been. I mean UMW blogs is the pinnacle of online publishing, how can they settle for less?

Well, in all fairness, it looks like they might be coming to their senses. This Wednesday I will be sitting down with Mike McCarthy (the new faculty adviser for the paper) and we’re going to talk about running The Bullet on UMW Blogs. So, in preparation for this discussion I figured a few compelling examples might help—though it wouldn’t take much given the train wreck that is the current online Bullet. The University of British Columbia’s Ubyssey is an excellent example powered by WordPress.  And, as luck would have it, Tom Woodward recently put me in touch with Dan Petty who is behind the University of Richmond’s student-run paper The Collegian. 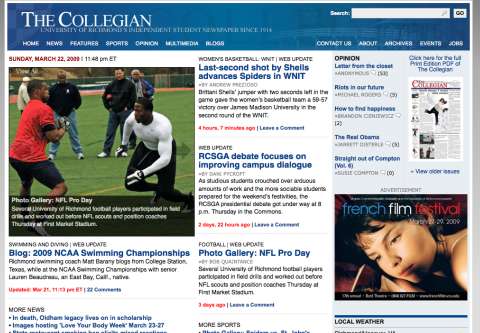 I have to hand it to Dan, The Collegian is yet another excellent example of a college newspaper running on WordPress. It’s an independent student-run paper, and they have really gone to town hacking that site out to do their bidding. I’m studying this as an example while I start playing around with a mock-version of The Bullet on UMW Blogs. I’m gonna have to sharpen some of my WordPress theme hacking skills—which is always fun. Hopefully I’ll have a compelling mock-up by Wednesday, but in the mean time here’s my work in progress. I guess, in the end, I really don’t want to push too far with the hacks because this should be what the students editors running the paper need to decide, right? I mean look what Dan Petty and his crew have done with The Collegian! Don’t we want them to learn how to hack it out and imagine how it should work? Well, yeah, I guess, but screw that, it’s too much fun to leave it to chance, and I don’t want to have to play hippie zen WordPress teacher all the time, I just want to hack some themes and sniff some glue, damn it!

4 Responses to The Bullet to UMW Blogs?