Last week the award-winning student-run newspaper at UMW, The Bullet, wrote this article about the final project Megan Eichenberg did for ds106. It was an amazing project, and I am ashamed I haven;t featured it sooner, but thanks to awesomeness that is UMW’s Bullet these days I don’t have to 🙂 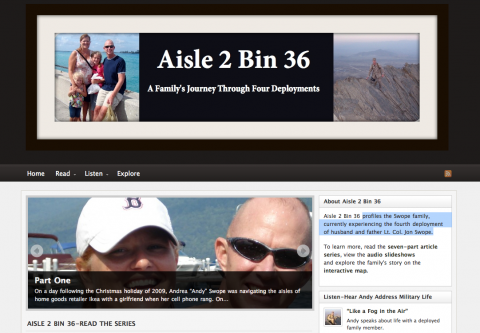 The article was written by Julie Dymon, and she interviewed me about Megan’s work in the class and my impressions of her project which is titled Aisle 2 Bin 36 (and you can find it here) which profiles the Swope family, currently experiencing the fourth deployment of husband and father Lt. Col. Jon Swope. It is a remarkably well done work in 7 parts, and Megan’s attention to both the overall thematic of her work as well as the details of each and every part of the story. But rather than repeat myself, let me reproduce some of the quotes about her work from the Bullet:

Groom felt that Eichenberg went well beyond the requirements of the class and showcased the family’s story in a professional and culturally relevant way.

[Aisle 2 Bin 36 is] unbelievably all-encompassing in terms of the media and in terms of the narrative,” Groom said. “I am surprised that the Washington Post or the New York Times doesn’t bring it up as a feature because I haven’t seen anyone do a work like that about someone who is home and dealing with what it means for a husband to be away at war.

I really like the way that that narrative expressed how it is not necessarily bookended by tragedy and horror but bookended by a psychological loss that is very hard to express,” Groom said. “What Megan really reflects for me is a new journalist of a new era and a new age […] I would hold Megan up as an example not of UMW, but across the board of what great media journalism can be.

So this is my long overdue tribute to the unbelievable work Megan did for ds106 this past fall. She rocks, and this project is a model for just about anyone thinking about what kind of work is possible when you let students follow their interests and put their passions to good use.