Last Spring Laura Falcon was part of the first iteration of the Digital Storytelling class I taught at UMW. That was a tough semester for many of those students—who were an amazing bunch—because I was very much imagining the course on a day-by-day process. And as much as some students have issues with the way the current class is setup, they have it easier in terms of expectations and example—this first group was running in the dark and I was only falling over the furniture a few feet in front of them.

Anyway, Laura Falcon and I have crossed paths since ds106 on a number of occasions. She was in Michael McCarthy’s News Gathering course, Anand Rao’s Visual Rhetoric course, as well as the Literary Journals course that tasks students with creating their own journal in 15 weeks. She has very much been part of a curriculum here at UMW that encourages creative approaches that give students a space of their own as well as a series of works to feature as part of an online portfolio. Increasingly, I think we should be recommending students get their own domains and map host it themselves, or map it to UMW Blogs, or host it on some third-party service—take back the idea of an eportfolio to mean something they control, own and take with them as way of chronicling, archiving, and featuring the work they have done. Kinda like this…. 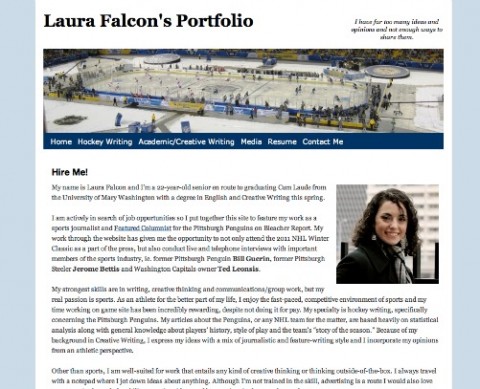 All this to say Laura actually met with me a few weeks ago to map her own domain on her UMW Blog as a resume/protfolio site that shows off her work as a creative writer, sports writer, journalist, and academic. She is an avid Pittsburgh Penguins fan and blogs for Bleacher Report as a featured Penguins writer. What more, she had press credentials for the Winter class this year, and wrote about her experience here. She is an amazing example of how so many of our students are  producers of remarkable works that they need to own and take with them. Laura is graduating in a couple of weeks, and I have no doubt she will be doing remarkable things in the very near future—-the Penguins really need to hire her, the proof is in the pudding.

This entry was posted in digital storytelling, ds10699 and tagged 99ds106, ds106. Bookmark the permalink.