Last week Will Richardson asked me to speak for about 20 minutes to a group of professors at the University of Washington, Bothell (I kept saying Bethel, I don’t know why–some kind of strange block) about the use of social media at UMW. The actual talk happened yesterday, and to complicate things I decided to experiment with cross-casting it to both ds106 Radio and ds106.tv. I had nothing prepared (by design), and I was basically fielding questions from Will—we also got a few minutes to talk about ds106—which was fun.

The session was in Elluminate, but as it turns out a number of folks had issues getting Elluminate to work—go figure 🙂 —so they used the d106.tv stream for the presentation. The only stupid thing was that I didn’t pull Will into the ds106 TV broadcast via Skype. You can hear his questions through the radio archive (which I have here) but not on the video above of the TV stream. I’m still a novice and figuring this media insanity out as a I go—but the Skype thing would have been a cinch with SoundFlower in Wirecast—I’ll know better next time—if and when there is a next time.

I think the best things about this presentation was Giulia Forsythe’s Ed Tech Jargon Bingo Card drawing (featured below) that emerged from the ds106.tv chat (between Ed Webb, CogDog, Mikhail Gershovich, Guilia, Noise Professor, Timmmmyboy, and others I may be leaving out) as the presentation was happening. They were betting on my next jargony term —and what emerged is brilliant. 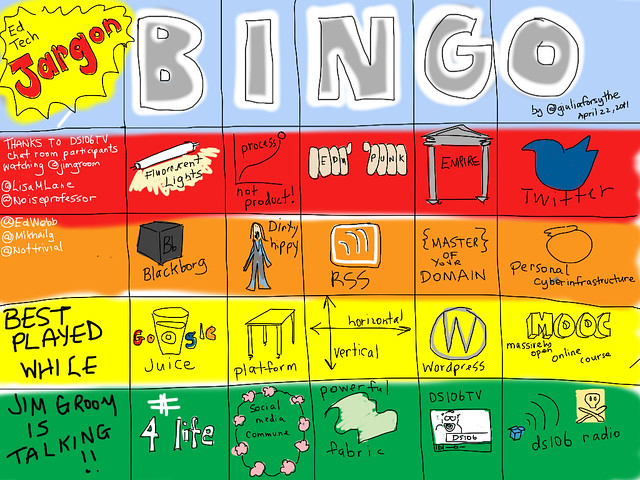 What’s more, soon after that Noise Professor produced this animated GIF with the abbreviated version of the talk. And to add yet another example of how amazing the ds106 community is Timmmyboy had the video up on YouTube in no time at all as one, complete file and tweeted Will with the link.There is power in community, and it is a privilege and an honor to have such amazingly creative, fun, and cool people to work alongside of as a result of ds106. #4life

Finally, if you want to catch my 17 minute rant against LMSs and Blackboard on ds106tv before the actual presentation, see the first part of this video on Justin.tv here (note there is some noise at the beginning cause I forgot to turn on my lapel mic).