OK, so upon finishing up one of the greatest series of assignments I ever gave, as well as did—-though to be fair I didn’t design them—I asked everyone to go through all the photos for each of the eight days and pick out their favorites, and then briefly explain why. Here are  mine:

Showcase the beauty of living foliage! Make a photo of a single leaf or an entire “greenscape” today.

Claire Cecil’s image for the foliage was pretty powerful. Not only does the leave look like it is burning while surrounded by green, but it was the first real sign of Fall I’ve seen in what has otherwise been a sweltering Summer here in Virginia. What’s more, it’s as if the other leaves are looking on, steady in their free life, as this one falls on her sword for them. 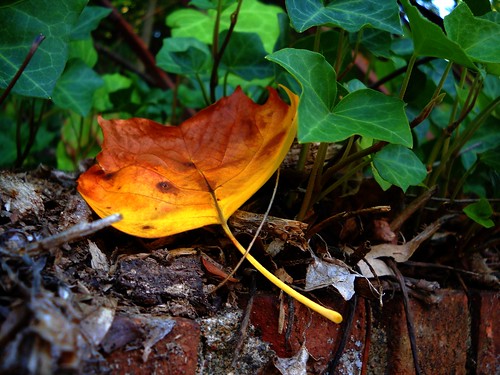 Make a photo of two complementary objects arranged in a pleasing composition, one large and one small.

Garrett Bush’s “Two loves.” There were a lot of good photos on Day 2, and this is when I realized that Daily Shoot assignments with a specific group that is sharing ans commenting is a powerful way to step back from trying to teach digital photography as much as working towards a common goal to challenge, think, learn, and work through digital photography together. In fact, the commenting during these eight assignments was mind boggling, this ds106 class came to talk and share.What’s cool is the last two weeks emerged as something more than an assignment, it became  a way of helping us see each other. And as with most photos I immediately see myself in these skateboards. The scale and complementary relations brought the assignment home to me so subtly, simply because I hadn’t thought of that, nor do I have that to photograph. It tells me so much with so little. And the light on the board worked well, and the narrative is imbued from perspective and relationship. Sometimes it’s there, sometimes it isn’t.

Some carry a talisman, amulet, “lucky charm”, or just a comforting thing in our pocket. What do you carry?

Again, a lot of great images on day 3, but that little pig in Edward’s pocket again frames an intrigue and narrative that just makes it an enigma to me, and keeps me coming back to it again and again.  The pig, an image titled “the thing that should not be,” is an ingenious frame of character because you know someone who carryies around a talisman like this regularly is right out of  film or novel. This prompt is all about revealing a part of yourself, and this pig represents the fodder of the best kind of mystery in why we do certain things, and how unique we are in our idiosyncrasies. This picture is al about framing the character for everything we don’t see. An image like this is so intrinsically linked to identity—something I remained fascinated with how we shape and foster online in narrative ways. And I can think of few better examples than this given the prompt. 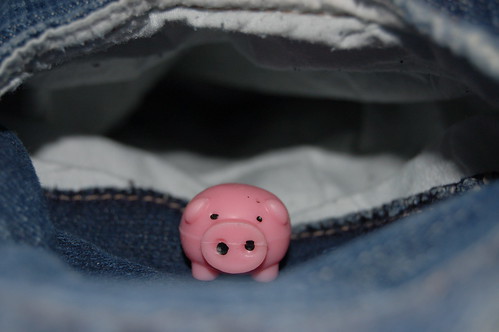 Make a photograph of something that is soft, or at least looks that way. Convince the viewer of the softness.

For the soft images, there were once again many, many good ones (I have a list of honorable mentions below) but Sadie’s “We all Scream” is just so beautifully visceral that I immediately felt the soft, stickiness of the ice cream. And the colors just make it all that much more evocative. A great shot 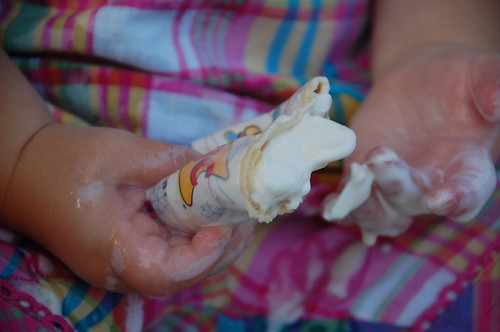 Use a mirror as part of a composition in a photograph today. Show yourself in the image if you’d like!

Man, how can I not go with Carlie’s “Reflective Shades”? Rock on! 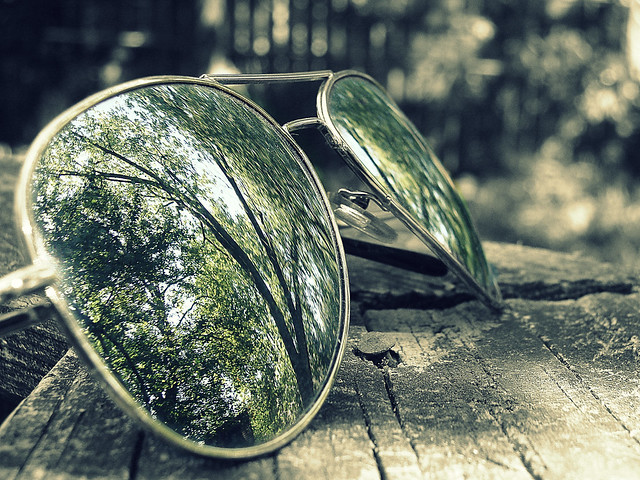 I actually found the mirror images some of the hardest for ds106 internauts to do well, which was interesting. For what I thought would be a layup was anything but by and large.

Communicate chaos, disorganization or messiness in a photograph. Find some beauty in it.

The chaos image were a lot of fun, and once again there were some excellent photos. My favorite was Lindsay’s “Treasures here and there” Chest because it is so rich in both complexity and color. The chaos seems so naturally layered and organized, and I can;t help but think of the I Spy books my kids and I read on occasion, such beautiful chaos like this reminds me of the web.

Honorable mention: Jenn’s Ramen Chaos is beautifully done, and the food not only looks chaotic, but somewhat sinister.

Symmetry can be calm and soothing. Make a photo today featuring symmetry, either in subject or composition.

The symmetry shots were great, and there were a lot of good ones, but one image that got very little attention from others, but really struck me powerfully was Brian’s “Imperfect Symmetry” because it was the first time anyone had really dealt with the body. And seeing the symmetry of bodies, and the very powerful subject of the human form brings me back to the idea of our notion of symmetry and bodies is always both aesthetic and somehow physical, and as Blake might say “fearful” in the flesh.

Honorable mention: Jenn’s “Boat Symmetry,” Jessica’s “Living in a Symmetrical World” is remarkable, Lindsay’s telephonic symmetry is great, and both Megan’s and Gretchen’s respective book symmetries were great, but a day too early 😉

Make a photo of an interesting stack of books or magazines. Consider how you handle repeating lines in your composition.

Kevin’s “Learning by Osmosis” photo for the final day is near and dear to me, because as Jenn suggests in this post on her top 8:

I think photo really embodies what the class is about. Taking creativity to a new level and showcasing your work 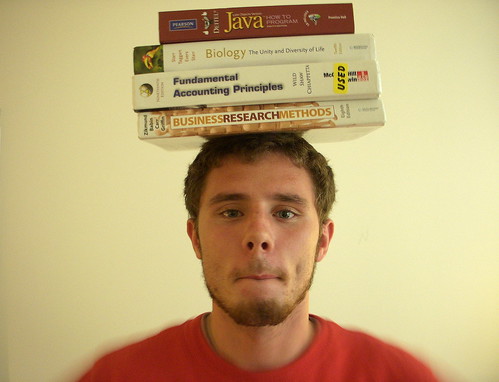 But I would be remiss here if I didn’t also feature Morrgan’s “Books” image, which really subtly plays with color and grays. it is a masterful shot once you take some time and look at it: 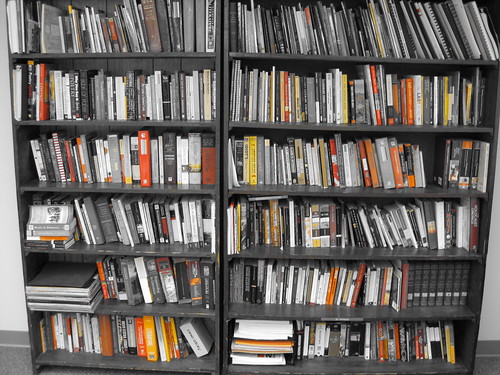 And finally, Ashley’s books for the semester tell us a lot about her semester, and what I wanna know is how much? 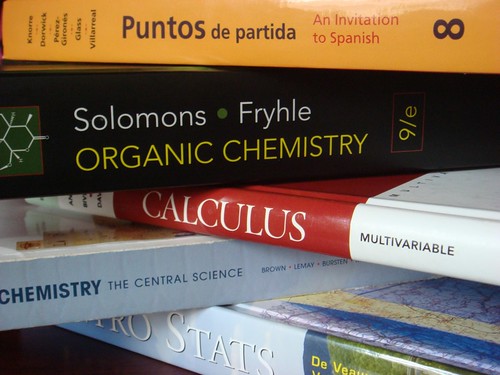 This entry was posted in digital storytelling and tagged dailyshoot, ds106. Bookmark the permalink.

3 Responses to The DS106 Daily Shoot Assignment: The Great 8