An Impressionistic History of Skateboarding, Part 1

As the nostalgia kicks in full force, I am transported back to Long Island during the 80s. My brother and I (16 and 13 respectively) built a half-pipe in our backyard while my Mom was enduring an extended stay in the hospital. Needless to say, she had a bit of surprise in store upon her homecoming. The actual ramp was pretty impressive,and all the credit goes to my brother who was responsible for all of the planning and design, I was basically the gopher. 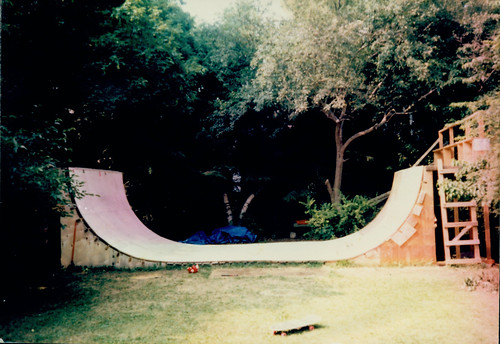 My brother was a surfer and caught the skateboarding bug during the renaissance during the late 70s, and given we shared a room it was no surprise that I would follow suit. Luckily he was a pretty cool kid and introduced me to some great stuff like surfing, punk rock, bad movies, and skating. He was by far the better skater, in fact he was actually quite good. 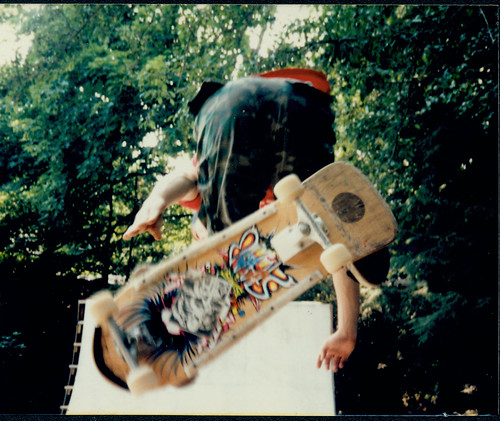 But I had my moments as well, half-assed, but moments nonetheless. 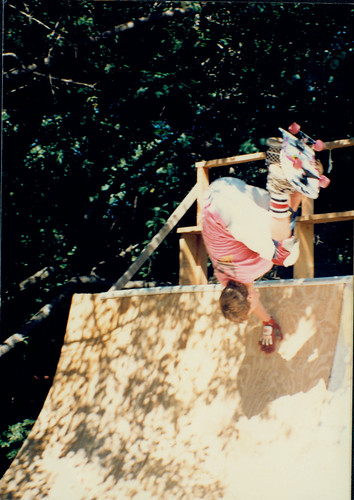 Skating for me during the 80s is a mixed-bag of remembrances. The actual act of skating was a ball, challenging gravity in the most precarious possible ways with no safety net while dreaming of the golden world of the California skate scene. It’s also, however, associated with some painful memories of knocking four of my brother’s font teeth out and a severe fracture to my arm (the third one was a doozy) that led to a regrettable lawsuit.

So on to the “history.” Skating emerged sometime in the 1950s and Back to the Future (1985) has an interesting historical interpretation of how it all began. Michael J. Fox (known as McFly in the dramtic re-enactment) traveled back in time and modified a crate scooter to give us the first skateboard. Here’s the clip masterfully ad-libbed by some bored kids:

Now that the origins have been adequately problematized, let’s move to the real driving force of any history: nostalgia! This article on BoingBoing I read last week, traces one man’s journey to find a skating movie from his childhood that made a deep impression (nostalgia does not happen in a vacuum). As with just about everything nowadays, he ultimately found it on the internet after years of searching (YouTube makes it so easy to dwell productively in the past).

If you watch the short clip from Skaterdater (1965) above, you’ll quickly get a sense of the predominant skating style of the 50s and 60s. A kind of barefooted, languid “street surfing,” and while the tricks are remarkable (especially given the board he is doing it on!)–what becomes immediately apparent once you watch the deleted clip from Stacy Peralta’s documentary Dogtown and Z-Boyz (2001) is that the transformation of skating during the 1970s was partially technical (the polyurethane wheel) but predominantly a product of aestheticizing skateboarding as a youth-driven subculture.

The following clip focuses on C.R. Stecyk‘s seminal Dogtown articles for Skateboarder Magazine during the mid to late 70s. Stecyk framed skateboarding as an urban youth movement in these articles that sparked a re-imagining of this “pastime.” Rather than thinking of skating as a land-locked, derivative form of surfing, he fashions it as a form of urban warfare in which eleven year olds were re-purposing the built environment they’ve found themselves in that galvanized a new physical and aesthetic self-expression. This new credo for skaters was most famously personified by skaters like Tony Alva, Bob Biniak, and Stacy Peralta. Here’s a wonderful quote from one of Stecyk’s articles found in the video below:

Skaters by their very nature are urban guerrillas: the future foragers of the present, working out in a society dictated by the principles of the past….The skater makes everyday use of the useless artifacts of the technological burden. The skating urban anarchist employes [sic] the handiwork of the government/corporate structure in a thousand ways that the original architects could never dream of.

With this new aesthetic came the vision of skateboarding that still persists today. Less about a means of transportation, straight-forward speed, or slalom skating, the move towards pulling aerials, shredding banks, conquering canyons, and invading emptied pools still holds.

And, of course, a sign of things to come in the 80s with the 1978 film Skateboard (starring Leif Garrett and Tony Alva–who is featured in this clip) in which a down and out businessman accosts three skaters with the promise of fame and rich which comes with skating professionally.

8 Responses to An Impressionistic History of Skateboarding, Part 1