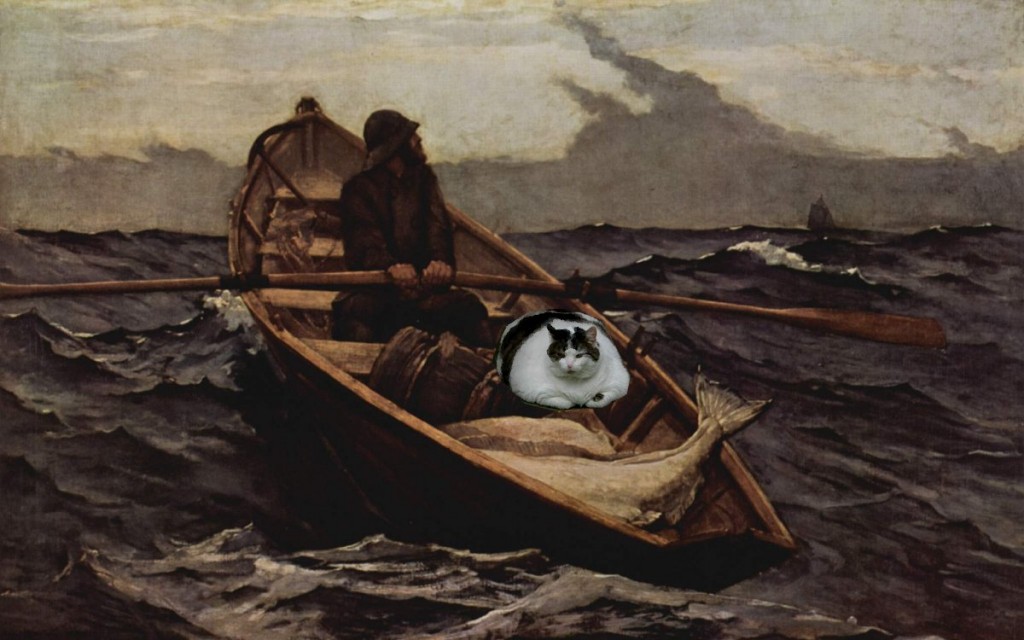 As soon as I saw Annie’s visual assignment for ds106 postulating that “Fat Cats make Better Art” I wanted to do it. And when Nick Antonini actually did his own version, I knew I had to do it now. So I spent some time thinking tonight about what kind of image I would put my fat cat in. Most of the examples on the insanely cool Fat Cat site (which is all in Russian) are mainly featuring the baroque art of Europe during the 17th, 18th, and 19th centuries. Given I am a proud, red-blooded American that loves freedom and pizza, I decided against this trend. I wanted to return the art to the exceptional lands that invented the web, save for that Tim Berners-Lee guy.  I went with my favorite 19th century US artist Winslow Homer, I figured putting a fat cat on a small dingy that is forever staring at two huge fish might introduce some much needed tension to the artwork. I am pretty happy with the way it came out, in the end.

My Process
This one was easier than I expected. I pulled Winslow Homer’s image from here and then looked around for some sedentary fat cats that are staring intently. I came up with this one from the abnormal hospital.

After downloading the images, I opened the Winslow piece, and then opening the image of the cat as another layer.

I then traced out the cat with the lasso tool and cut the cat out and then pasted it into a new layer. I then deleted the old cat layer I had just cut, and scaled the new layer with the cat to fit comfortably in the dingy by going to Layer–>Scale.

Finally, I selected the cat and used the Filters–>Artistic–>Oilify to make the cat more like a painted piece, and adjusted the brightness to dim the whiteness of the fur a bit.