The Wire Come to Life

For the final project in Wire 106 students were asked to chose a character from the HBO series The Wire and build an online presence for them across several social media sites. It’s been interesting experience these narratives because they hit me at the strangest times when I’m not looking for a story. For example, a couple of weeks ago Omar Little request to follow me on LinkedIn. I never setup a LinkedIn account, but after getting the email from Omar I felt compelled—but only a bit by fear—to comply with his wish 🙂 After setting up a LinkedIn account and following Omar, it turns out he  didn’t have much in his account as of yet given it was brand new, so I soon moved on.

However, a number of people have been discovering I am on LinkedIn now and started following me. I’ve been avoiding following people back because I’m fairly certain this experiment on LinkedIn will be short-lived, but I have been fascinated by the job culture of this network. We recently had Phil Windley and Kelly Flannagan from BYU here at UMW to talk about the work we’re doing with Domain of One’s Own. We had a great day, and the work they’re spearheading at BYU in terms of imagining a university-wide API is truly visionary, but I’ll save my thoughts on that for my next post.

Anyway, after the visit Phil followed me on LinkedIn, and I clicked on the link to check out his profile. Once I did I noticed a small notification on the right-hand side of the page that Omar Little has a new job. 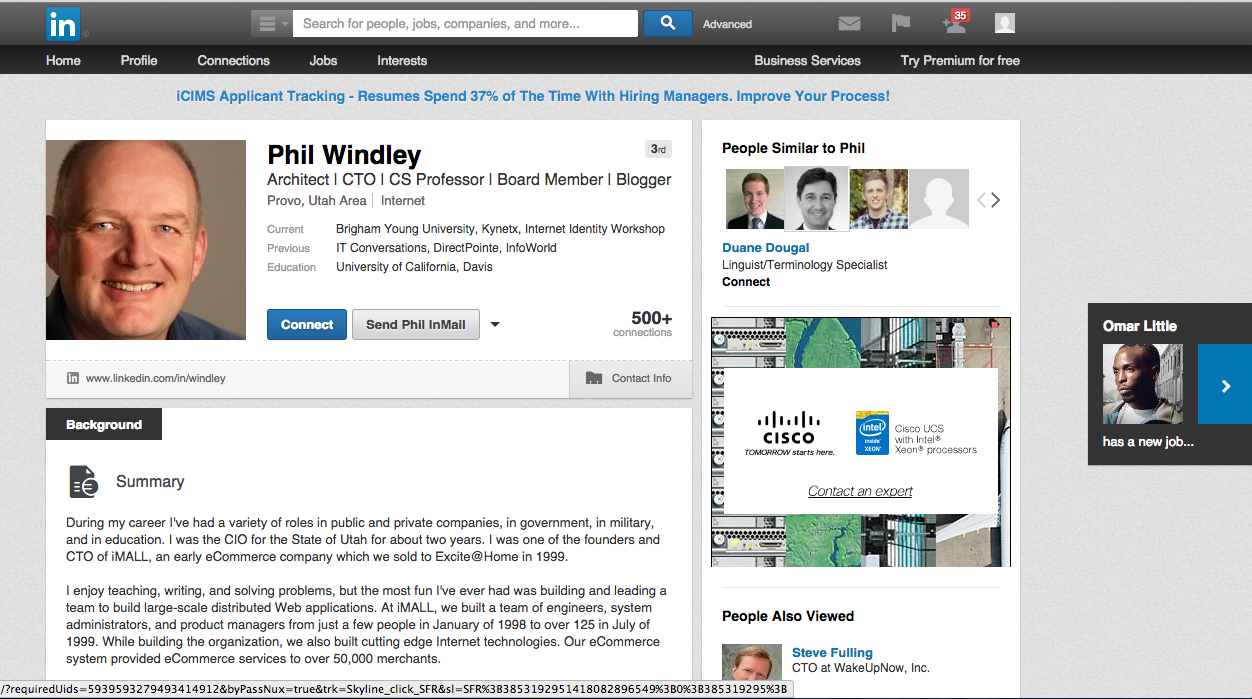 I was intrigued and followed the link. 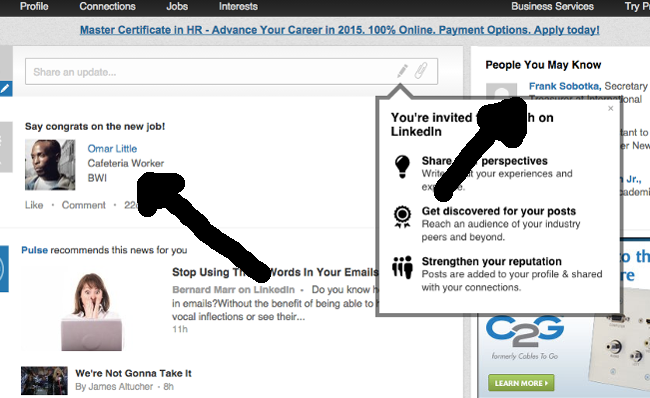 Turns out Omar got a job as  a cafeteria worker at BWI Airport. Now that might seem arbitrary to those of you who’ve never seen the series, as well as for some who have. But this is an important detail from the show. Omar tells his grandma he works in a cafeteria at the airport because he knows she’ll never go there in order to hide his true life as a stick-up artist.

The beauty of this kind of distributed, transmedia project is all in the details. And this one blew my mind because I wasn’t expecting it, it hit me while I was going about my “normal” life on the internet. That said, it led me to imagine the true power of such a narrative for the class. Not only because it suggests a close reading of the show, but also because it in many ways subverts the whole enterprise of LinkedIn. This act highlights the subterfuge at the hear of a long gone patina of respectability and dignity in the American workplace. No character in The Wire knows better that the game is played by gangsters and professionals alike—and just as ruthlessly. How’s that for the power of a single status update?! Kudos to Melinda Albrycht, the mastermind behind the curtain of Omar, she did a brilliant job with the entire class, and her transmedia version of Omar was no exception.

You might have also noticed that Frank Sobotka was one of the people LinkedIn thought I might know, and it turns out I did know Frank. We go way back to days before the containerization of the dock. But that’s a tale for another post. As you might imagine, the rest of the evening was lost to a Wire 106 transmedia rabbit hole that highlighted how much the beauty of this form of storytelling lies in its truly liminal position between the worlds of fiction and non, imagined and real, virtual and concrete. And this is just one of many, many examples. Stay tuned for more.

This entry was posted in digital storytelling and tagged ds106, the wire, wire106. Bookmark the permalink.

2 Responses to The Wire Come to Life