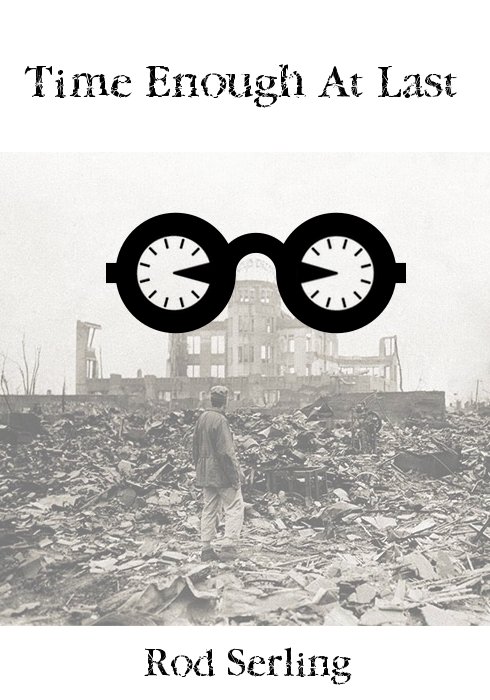 I am really happy with how this one came out. It was a mashup of things, so let me run you through them quick. I started out thinking about using the iconic symbols in this episode of Twilight Zone, namely the glasses and and the clock, by placing a clock face within each lens.
This was the beginning of the idea. I found the glasses and clock icons on The Noun Project. After that I created a new canvas in Gimp that was roughly 700px high and 490px wide with a transparent background. I imported the two icon SVG files and adjusted there sizes, I made the glasses 300 x 300px and kept the clocks at 100 x 100px. Once i selected and moved each layer aroundI had my design, but I though I needed more, which is when I started searching for rubble as a backdrop. I found this insane image of the aftermath of H-bomb in Hiroshima which is hauntingly similar to both the theme and aesthetic of “TIme Enough at Last,” and I knew I would use it. I added it as a backdrop, put its opacity at 50%, and added the book title text at the top and author name text at the bottom using the Twylyte Zone font, although I think I might even like the Ringbearer font better. After that, I added a new layer with a white background and moved the layer so it was the background for all effects. After that, total awesome–what say you? Does the archival image and iconic glasses work for you? I kind like the serendipitous effect of the glasses sitting neatly on the cupola of the building, so cool!