I had an amazing two weeks in the UK and Ireland, and this post is one of many that will try t0 chronicle and make sense of my time. I am not necessarily going chronologically. Rather, I will be picking several vignettes of my experience to try and capture my time there because the idea of a comprehensive wrap-up post is way too daunting. I’m still processing all the goodness, but I do now know how happy I am to be working in the European context these days. My trip to Cork and Galway (more on that in future posts) as well as OER17 in London (a workshop from which will be the basis for this post) made me really appreciate the European* ed-tech community.† There’s a lot of excitement here about what’s possible in the wake of the MOOC-inspired VC bubble, and the fact that most of the money has dried up means the conversations are not being driven by start-ups and vendors, or grantors and foundations, but rather the people who still have real skin in the game. OER17 reminded me of a couple of my favorite conferences over the years, namely Northern Voice 2007 and OpenEd 2009—and that’s no faint praise.  There was some seriously good energy, and I think that is evidenced by the growing number of posts from those attending. I have a few posts to add to that growing list, so let’s get on with it.

Running a good workshop is an art form.  I know simply because I failed at it so many times. So, my first post on OER17 will be to give major kudos to Kate Green, Christian Friedrich, and Markus Deimann on their workshop “Towards Openness – Safety in Open Online Learning?” The approach was simple and effective: they showed four short provocations about the state of security and online learning, and asked the participants to break up into groups of four or five and try and design a response. The response should be an intervention of some kind that can be applied directly (or that’s how I remember the charge, I may be wrong). You can see the design of the workshop as well as all four videos at the Towards Openness site, but the one that sparked the discussion that led to our groups intervention was Chris Gilliard’s video framing “surveillance capitalism”:

The provocation frames educational technology as a means of surveillance and appropriation of personal data as part of the inexorable appetite of late capital. Our challenge was to think about how can we counteract the fact that just about everything we do online is collected, monetized, and sold by various actors. I have to come clean and say our group was pretty stacked: Rob Farrow recorded one of the four provocations (he was our ringer!), Brian Lamb invented the internet, Bryan Mathers illustrated it, which leaves me—the only real weak link. That said, our group also had its obvious limitations given it was fairly homogenous when it came to gender, race, and class. 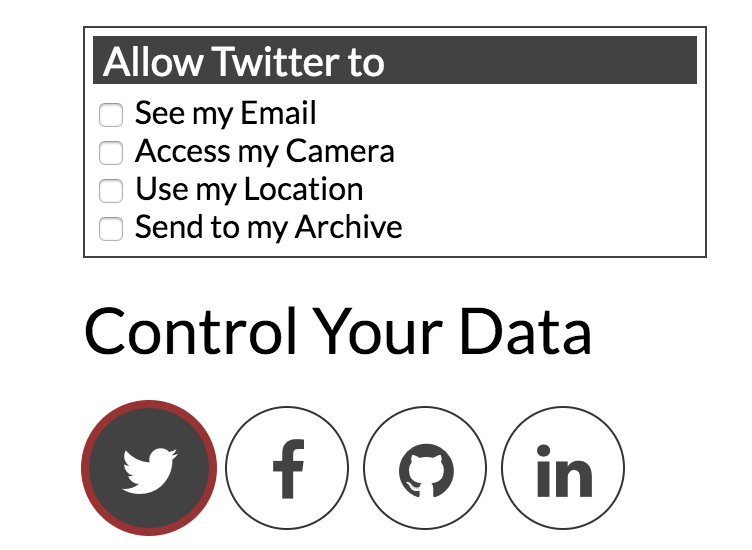 Once we got started, we discussed possible ways of allowing individuals to visualize what personal data sites and services had access to and were collecting. I showed off the prototype above that Tom Woodward created while we were in Sweden in February. The idea there being what would it look like if you could easily see and control the information various apps could access. This led to a conversation about a personal data dashbaord of sorts where you could explore what providing access to certain data (or not) would cost you.  For example, if you do choose to prevent Twitter or Google from tracking your location, what do you give up?  In many ways, the dashboard would be a space where you could make informed decisions about what you decide to share.  We noted that something like this would have to be run by a third-party independent of the major social media silos in order to ensure that when Facebook or Google say they have locked down access to your information, that can be independently verified. As Brian Lamb noted, we are relying on these companies good word, which is not necessarily comforting nor much of a social contract.

From there the question of algorithmic citizenship came up, which visualizes how much information we get and share online is effectively nationalized. Which led to discussions about how we can be understand how privacy works through accessing similar searches and information about us online through various IP address around the world using VPNs and IP proxies. This would be one way to start demonstrating the way our realities are always contextualized by where we are and what we are looking for. What emerged was the idea of this imagined dashboard acting like a personalized “data score” in which the individual can monitor, tweak, and take back some control over their personal data online. This could be a browser or a service, and ultimately it would revolve around regular notifications detailing what services are accessing your personal information, and how it’s being used. Rob Farrow nailed it when he noted the only way to challenge surveillance is through counter-surveillance, hence the “Counter (Data) Surveillance Dashboard” visualized by the seemingly endless genius of Bryan Mathers: 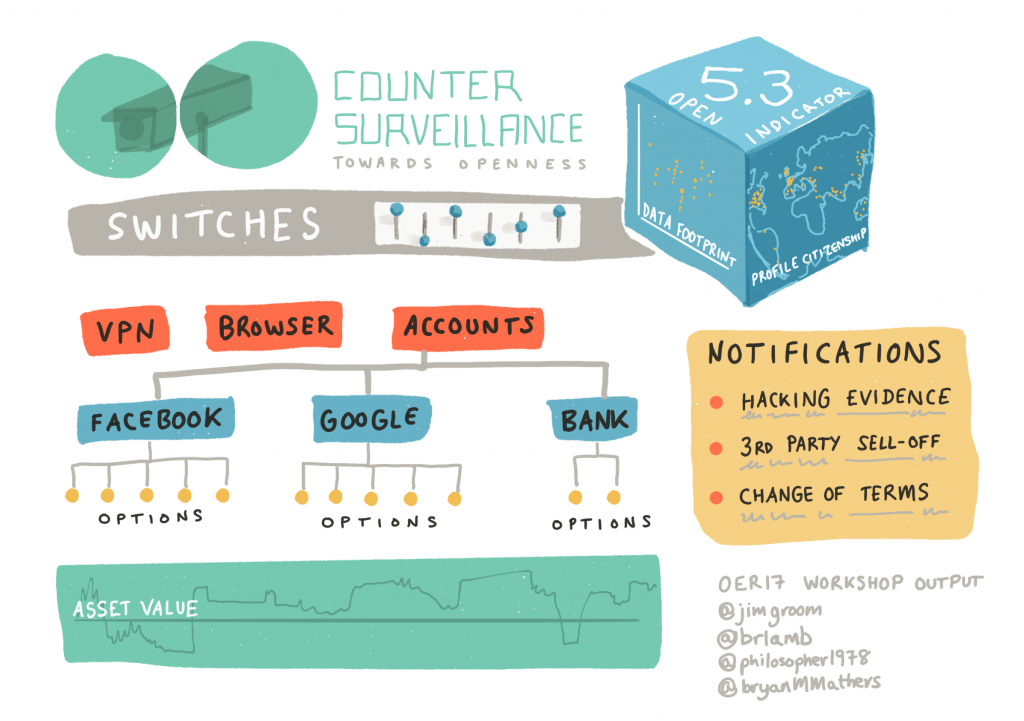 It was a fun group that was set off on a fun mission thanks to an awesome workshop. This is just one example of the many amazing moments I had at OER17. I’ll try and chronicle as many as possible, but I will be recycling this one into my talk in New Zealand next month because I feel like it is completely inline with re-thinking how we manage our online lives. Below is a video wherein we all frame the project, it’s probably much more cogent and succinct than this blog post.  But a blogger gotta blog.

†Although, to be fair, OER17 was quite international, the conference had folks from all over the world: Australia, Egypt, Uruguay, Mexico, Canada, and the US—and those are just the sessions I went to.

*For the sake of this post, as well as the fine people who attended OER17 from the England, Wales, and Scotland, the UK is still part of Europe. Update: I’m just gonna leave Josie Fraser’s corrective to my ignorance here:

@jimgroom We are leaving the EU, which is bad enough Jim – hopefully we aren't moving the UK physically out of Europe though 😀 great post!

This entry was posted in OER17 and tagged data, OER17, privacy, workshop. Bookmark the permalink.