UMW Blogs is Full of Rainbows and Unicorns 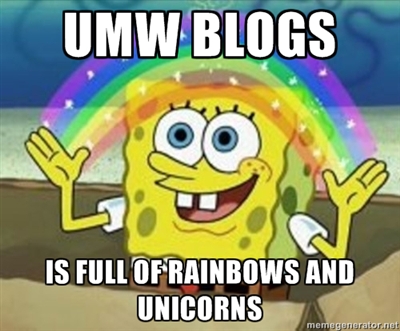 UMW is gearing up for its accreditation review in 2013. We are part of the Southern Association of Colleges and Schools which is one of the six regional accrediting bodies in the US that oversees more than 13,000 public and private educational institutions from preschool to university. It’s an interesting process to watch unfold—even from my myopic perspective of it—and what’s even cooler is that thanks to Tim O’Donnell—the glutton for punishment running the SACS review at UMW—the work done by DTLT over the last 5 or 6 years will be prominently featured as part of the review.

I won’t bore folks with the UMW Blogs story because I already wrote the story of the emergence of UMW Blogs a few years ago. Rather, I want to focus a bit on some of the materials I’ve been working on that I think might be useful beyond the SACS review. I’m going to publish some of that here to see if anything resembling a narrative emerges from the disparate pieces. In the event a narrative doesn’t congeal, I’ll ask for forgiveness in advance 🙂

One of the first things I did was return to a resource page I’ve been updating for almost 4 years that contains all the courses taught in UMW Blogs since Fall 2008. There were at least 439 courses taught in UMW Blogs since then. Additionally, there are a number of courses from the 2007/2008 academic year that were taught in UMW Blogs as well, but I didn’t organize those so the records are hazy. If and when I do hunt them down we could probably add another 30-50 courses to the tally. What I also established was that there were at least 88 different faculty that taught at least one of these 439 classes in UMW Blogs since Fall 2008. These faculty members represented at least 25 disciplines. What’s more, all but 6 of those faculty were full-time faculty (Martha, Alan, and I are 3 of the 6 adjuncts that taught in UMW Blogs) which means 82 Full-Time faculty, out of a pool of roughly 200, taught in UMW Blogs at least once over the last 4 years. And if we are talking about frequency, 70 of those faculty have used UMW Blogs as a space for a course site for more than one semester. I’m pretty excited about these numbers, and while they don’t tell the whole story by a long shot, they begin to suggest there is data we can build a story around. You want data, we got data!

And I will talk more about data when I look at the traffic statistics in a bit, but before that it might be useful to note that we also have had our fair share of press. Here is a sampling:

UMW Blogs cited as future of networked learning by Richard Demillo’s in his recent book Abelard to Apple: The Fate of American Colleges and Universities.

And that’s just a few, as part of the SACS review dossier for UMW Blogs I have also reached out to other universities such as University of British Columbia, Duke University, and Yale University to write letters of influence, basically framing how the work we did with WordPress and UMW Blogs inspired work at their campus. Fact is, we didn’t even reach out to the folks at the MacCaulay Honors College, Baruch, or the CUNY Academic Commons—maybe it is time we got the CUNY folks involved in this review 🙂 I figure it is a good moment to document how this model is not only a viable alternative for universities—one which not she be understood as replacing the LMS—but rather a powerful way to scale innovation on a campus community at a level heretofore unimaginable. Just think about it, a group of 5 people working consistently with more than 70 Full-time faculty over 4 years who have taught more than 400 classes through a platform that defaulted to open, used the web as it’s firewall, and encouraged a larger sense of an intellectual community. How many other instructional technology groups can even approximate this? As I tweeted earlier, there is still a very rich story to be told here about scaling innovation through good open source software like WordPress.

But now for some UMW BLogs traffic stats over the past 3 years (we didn’t start an analytics account until July 2009): 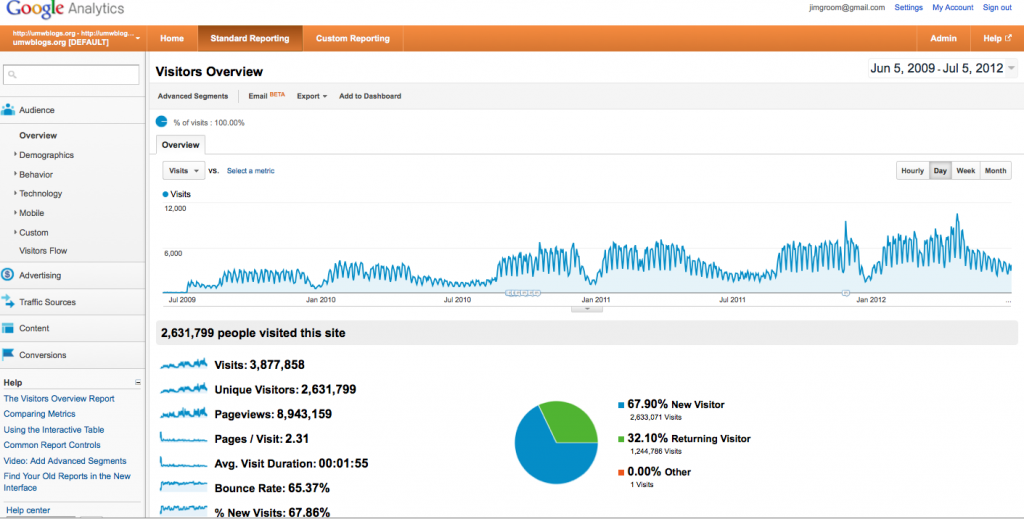 As Brian Lamb so eloquently notes, open ain’t what it used to be, but for me part of being open is a positionality of an institution. The idea that we will focus on doing awesome stuff with our students out in the open and that someone, somewhere will experience it, re-use it, or just print it out and hang it on their wall, and as a result we’ll have made the internet just a wee bit better. I have no proof or data for any of that, but when I look at these numbers I want to believe that’s all in there somewhere, and that’s the part of open that appeals to me most—the unknown.

“But how has UMW Blogs been growing?” you ask. “Show me progress through growth!” You want hard and fast numbers rather than this pandering to a vision and a philosophy. Well I got those to, you philistines!

I’m not much of a number cruncher, but a few things are apparent right away, UMW Blogs exploded from the 9/10 academic year to the 10/11 academic year in terms of traffic. Visitors, visits, and pageviews all but doubled between 9/10 and 10/11. Why? I’m not entirely sure, but I think we could argue that come 2010/2011 UMW Blogs was hitting a stage of maturity. Internally UMW Blogs was a defacto enterprise system at UMW, it was being used by administrative offices, faculty committees, academic departments, students clubs, as well as a wide range of other uses that move far beyond anything resembling a course. What’s more, as time goes on UMW Blogs seems to gain more and more search engine power, what is lovingly referred to as “Google juice,” for searchers unrelated to the UMW community. I believe this is because it has become a fairly trusted source of activity on the web, and as a result its page rank and ability to promote its content towards the top of Google web searches is fairly strong. Having a platform that is forward facing on the web—a rarity at too many schools when it comes to teaching and learning—means that our work is being found by literally millions of people around the world. That, in and of itself, is really exciting to me.

Moral of this story? I’m not sure other than the simple fact that at 5 years old UMW Blogs has matured quite gracefully, and rather than being an experiment as it was in 2007, it’s now one of the few, if not the only, web-based system at UMW that features the awesome work happening in our classrooms. It remains a fish tank onto the intellectual life of UMW, and it has been both rock solid this past year (more uptime than any other UMW enterprise system during the academic year), but also it continues to inspire experimentation and innovation amongst faculty and students alike. There’s still a lot more stuff to be done in UMW Blogs, and after I finish with the SACS review data and departmental assessment reports I’m gonna get back to it. #umwblogs #4life

1 Response to UMW Blogs is Full of Rainbows and Unicorns