I have been playing around with Google Analytics for UMW Blogs, and I took a snapshot of the traffic thus far this semester. Since August, 24th until today, UMW Blogs has had half a million page views by 211,000 visitors, 135,000 of which were unique. What’s more, we’ve had traffic from just about every country on the globe. 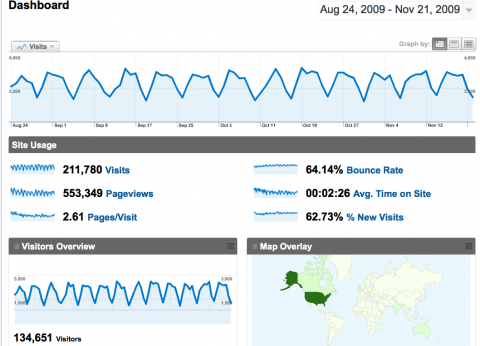 I’m still thinking about ways to use some of these stats to actually say something meaningful, and while I am entranced by the numbers at times, I’m not sure if looking for meaning in scales and aggregates makes any sense at all—in fact, I wonder if it simply reproduces a model of data collection and quantification that is eating the heart out of assessment in most institutions. Anyway, there you have it, but what it means is something (if anything) else, I’m afraid.

This entry was posted in UMW Blogs, Uncategorized and tagged umwblogs, wpmued. Bookmark the permalink.

8 Responses to UMW Blogs Traffic Stats—do they mean anything?