George Meadows’s comment on my last post reminded me that I did, indeed, have prior knowledge of this early animated GIF machine known as the praxinoscope:

Jim, about a year ago I gave you a toy praxinoscope – I bet you still have it stashed on the shelves of forgotten technology – and told you it was the earliest example of an animated gif. After reading this post I now realize at that time I was on the cutting edge of the trailing edge.

George Meadows is the selfsame faculty who’s been playing tirelessly with various gadgets throughout his tenure at UMW, and more recently broke bad with his experimentation with 3D Printing over the last two years—all of which led to UMW’s work with Makerbots, Makerspaces, and Printrbots. In fact, as a result of George’s work in this realm with student teachers in the local school systems we may very soon have a Printrbot in every classroom! So, when George calls me out, I listen 🙂 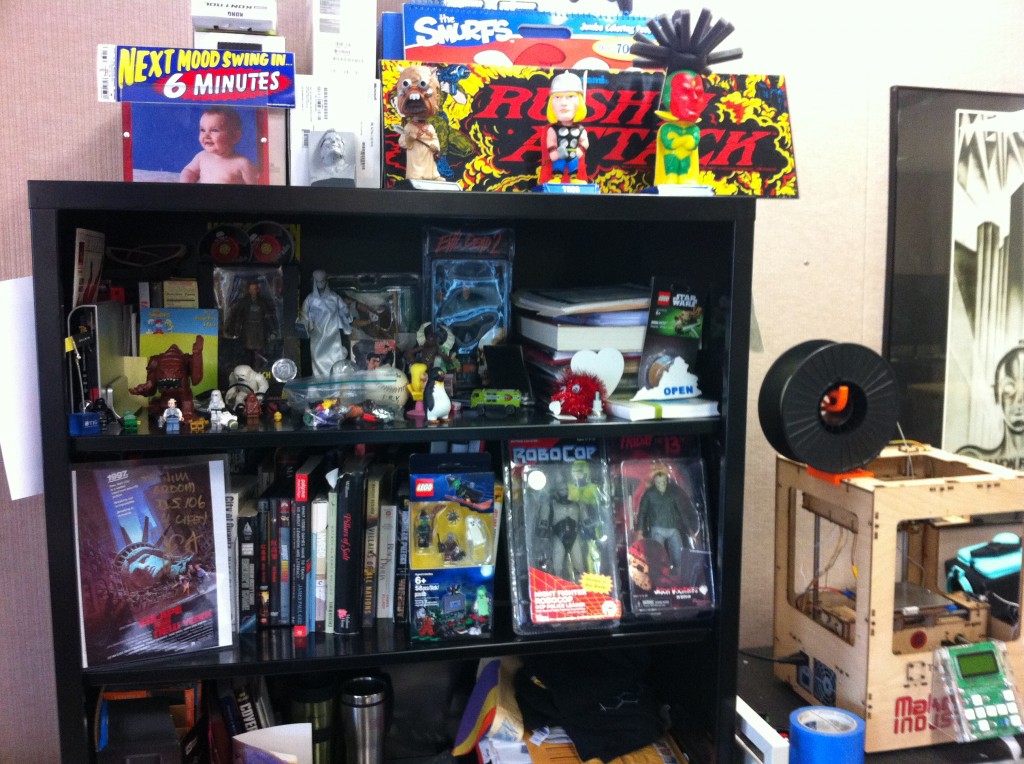 The Bava Cabinet of Wonders

Lo and behold, when I dug into the bava cabinet of wonders (pictured above) I found the praxinoscope George was talking about, which I originally thought was a zoetrope, but I was wrong. Turns out the distinction is an important one:

Like the zoetrope, it used a strip of pictures placed around the inner surface of a spinning cylinder. The praxinoscope improved on the zoetrope by replacing its narrow viewing slits with an inner circle of mirrors, placed so that the reflections of the pictures appeared more or less stationary in position as the wheel turned. Someone looking in the mirrors would therefore see a rapid succession of images producing the illusion of motion, with a brighter and less distorted picture than the zoetrope offered.

So I busted out the praxinoscope and gave it a spin, so to speak. Below is a two minute documentary narrated by me wherein I explore the praxinoscope. Andy Rush was responsible for the camera work and visuals (well, he gave me the small tripod at least).

Also, here are some scans of 4M’s Animated Praxinoscope manual that provide a good schematic for the device, which might give you a better sense of how it works. 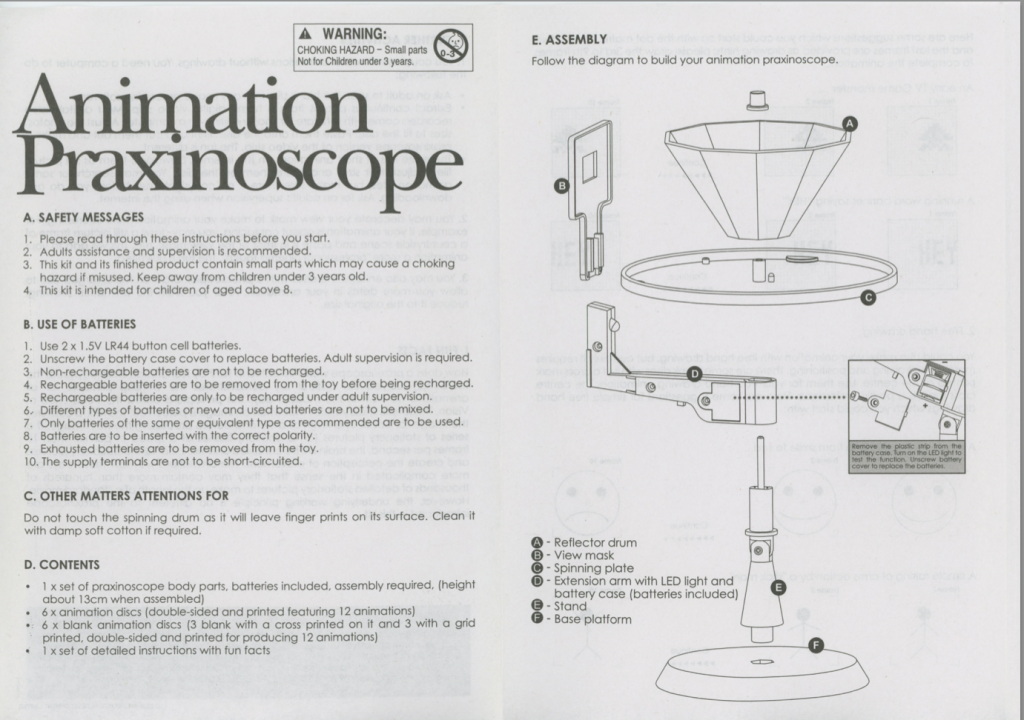 Also, here is a scan from the manual that explains how you might go about free hand drawing animations for the praxinoscope: 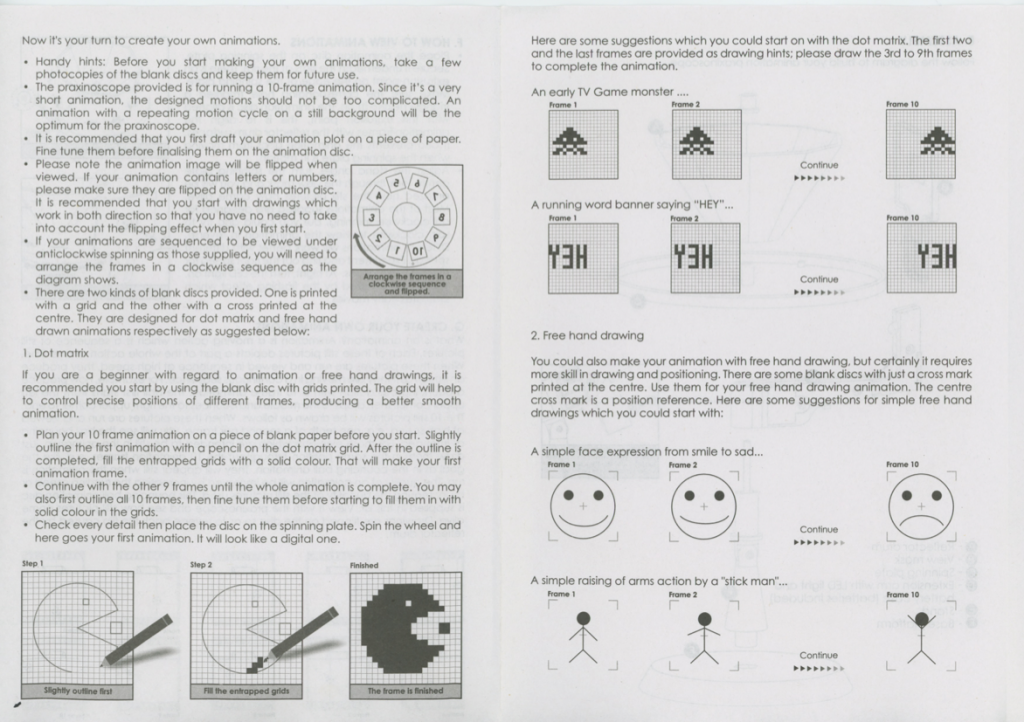 Finally, here are some scans of the Pac-man 10 frame animation as well as the blank grid they provide for you to create your own. I imagine my next post on this topic might actually be about something original I create for the praxinoscope. I can hear them now, “Enough historicizing, WE WANT ART, NOT WORDS—DAMMIT!” 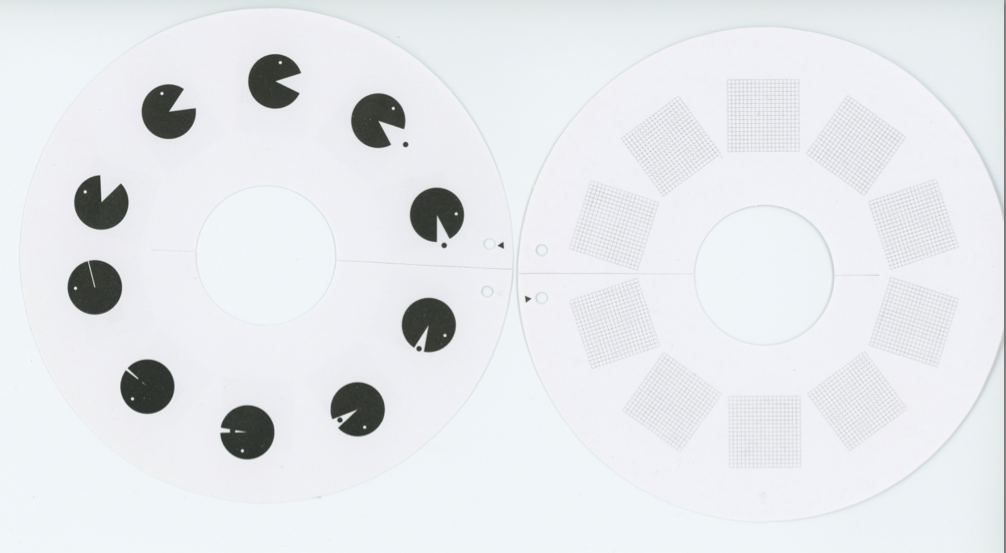 2 Responses to Understanding the Praxinoscope