We’re all digital now, the quiet end of analog TV 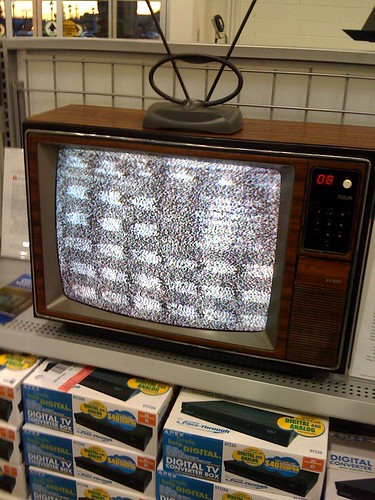 I was catching up on my feed reader, and I came across this post over at Ed Grant’s Media Funhouse—a consistently brilliant movie/music/culture blog, a perennial in my reader—mourning the passing of analog TV which happened on June 12th, 2009 at midnight—did anyone else also completely miss this pretty monumental moment in TV history?

Thus, it must be honestly said that the TV makers of the world and the cable companies are thrilled with this federally-mandated digital conversion, which Obama did thankfully delay — but, again, what is it exactly making better? (We aren’t going to be converting over to the super-beautiful, more-lines-per-image European system.) It makes no one’s life easier or better (those who wanted a better picture and could afford it… already have it!), and just troubles low-income folks who can use their coupons to get a digital converter box that must be programmed, channel for channel.

And what will happen with the vacated bandwidth? Will the government be converting unused TV channels to wireless broadband to make digital communications cheap and accessible for every household? Well, of course not, it will be used for “public emergencies” and the end of free TV will be complete. Television is now another utility everyone must pay an arm and a leg for—feeding the greedy cable conglomerates, the same people who are now the guardians of copyright for the RIAA and MPAA. We pay for them to control our media habits.

So, stealing shamelessly from the Media Funhouse, here are a few videos the mark this historic occasion that came and went without a peep, and further solidified our our indentured servitude to cable and satellite conglomerates everywhere:

A Philly viewer caught an even more emblematic image: commercials (of course!!!) going to the station logo, and then… it’s over:

2 Responses to We’re all digital now, the quiet end of analog TV