What about the UMW Students?! Lest I forget after paying all sorts of love to the UMW faculty for the emergence of the digital at UMW in my last post that there’s another part to this whole equation: the students! I always find myself in a strange place when talking about students because I don’t want to be that middle-aged creep pretending to know what’s best for the “milenials” in the worst patronizing ways (if you’ve been part of edtech for any amount of time, you know what I am talking about). In fact, I’m probably the worst person to talk about empowering students given how much DTLT student aides like Tyler Crump hate me (straw, ego, lightening, picnic).

That said, everywhere in my network there are awesome UMW students who continue to blow my mind. Take UMW student and ds106 alum @captmorrgan who just tweeted out a link to a survey for her senior research project about attributing responsibility in rape:

Take my senior research survey! It’s on how we attribute responsibility in #rape & #sexualviolence and it’s anonymous edu.surveygizmo.com/s3/1081573/WGS…

That was just a few minutes ago, what’s not to love about UMW students? I kinda take them for granted, they are cool, gritty, freaks, and geeks. There general awesomeness make all the middle-aged fumbling we do around technology that much better, because for some of them it clicks and they proceed to blow our minds.  I mean look at recent graduate Sarah (@cali4beach)—another #ds106 alum—who continues to rock the blog while teaching in South Korea with a mashup of Calvinist fire and brimstone and Catholic guilt —I love it:

Or fellow classmate and ds106 alum Megan McMillan who two years after graduate refuses to stop rocking the design assignments like a boss. Are you kidding me, how much more awesome does it get? Well, I guess there is Emily Potosky, who for more than two years has been regularly updating her blog about her time in South Korea as a Fullbright fellow, and beyond. There’s an amazing archive of her work as an English teacher (and she is damn good), as well as an American abroad, a UMW alum, and all around compelling storyteller. She has been one of my favorite reads for almost two years now. Crazy!

As for the group of ds106 maniacs from UMW killing it this semester with Alan Levine, I don’t even know where to start, they make me feel old—“remember the days when ds106 actually taught you something?” They are working at another level right now. 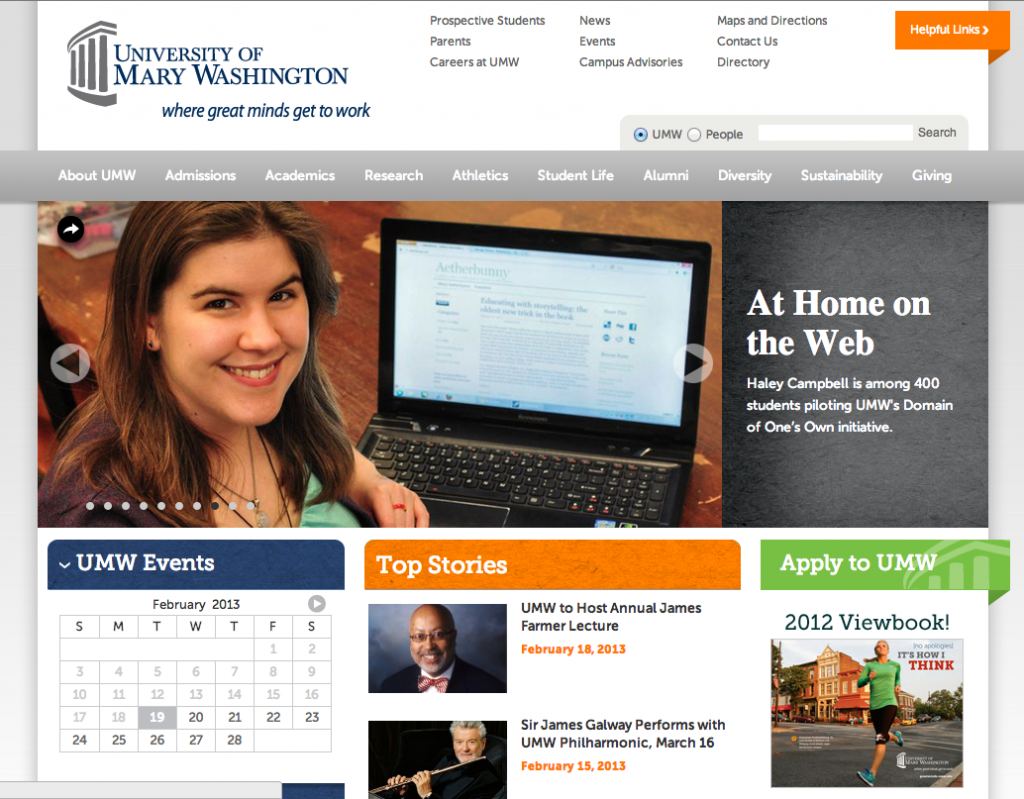 I don’t want to be a creeper, I swear, I’m just deeply compelled by all their awesome narratives, and the amazing things they do on a regular basis. Just last week ds106 alum and DTLT’s own student aide Haley Campbell is currently featured on UMW’s site based on her amazingly articulate and compelling vision of the web as part of a rising generation who can’t imagine a moment before it, but in a far more rich and complex way than any of the digital native tripe. Don’t believe me? Listen to this bit on the “realism of the web” and tell me if she doesn’t sound like another Campbell who has a thing or two to say about the web.

So, in the end, I don’t claim to understand their generation at all, although I think they’ll write the poetry that will truly elucidate the impact this space has on our individual and cultural sense of self (paging Brad Efford and Shannon Hauser), with them it will become mature, not the vestigial marketing organ that we’ve mistaken it for. UMW students are the hope I have every day I come to work, I want them to live in the web and interrogate it. I want them to hate it, love it, break it, dream it, and inhabit it in ways they never thought possible. That’s the empowerment I pretend to, but I know it is itself weak and feeble, but that’s all I got—they will have to fill in, correct, and re-imagine all the omissions, mistakes, and downright misrepresentations I am assuredly guilty of. But I’ll try not to speak for them cause they can do this too. They can type out the words that might just hit a nerve with someone else out their in the amazing void just beyond the screen. I love UMW students, but I’m a terrible amnuesis—their story is for them to own.

This entry was posted in umw and tagged awesome, ds106, students, umw. Bookmark the permalink.

2 Responses to What about the UMW Students?!