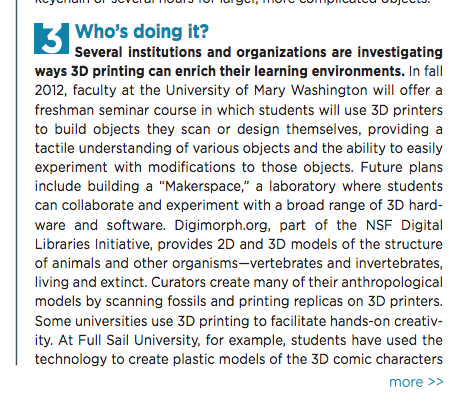 In this month’s edition of ELI’s 7 Things Series they feature 3D Printing, and thanks to the awesome work of Tim Owens and George Meadows UMW is featured prominently. Tim and George have been experimenting wildly with 3D printing over the last academic year, and 2 Thing-0-Matics, 1 printer bot, and a recently acquired Replicator later they’re all but ready to teach their Freshman Seminar on Makerbots and Mashups this Fall. Tim has been chronicling their work on UMW Blogs here, and what’s truly amazing about 3D Printing is how immediately it both amazes and inspires anyone who comes within range its imaginative tractor beam. They’re nothing short of hypnotizing to watch in real time, add to that the conceptual and real possibilities of how science and technology is changing the world of industry as we understand it and you have a realm of edtech that we have only just begun to explore. What’s more, it’s finally cheap enough for any institution to experiment with.

Mike Wesch was imagining the possibilities of 3D Printing on his blog 5 or 6 months ago, thinking about what it might mean to design and build your own identity markers rather than having them packaged and sold as labels by corporations. A powerful idea, and in many ways just the beginning when it comes to thinking about the impact making things on this scale will have on our culture at large. But what’s immediately clear from our experience with makerbots at UMW is that there’s absolutely no shortage of wonder whenever a student, faculty, or staff member comes into contact with it, it has just about the same effect on everyone: they’re both blown away and keenly fascinated all at once—a fine combination.

For anyone keeping track like me, UMW has been featured in 5 of ELi’s 7 Things series over the last 3 years.

Now I won’t say it doesn’t help to have a someone on the inside, Alan Levine is on ELI’s 7 Things advisory board. At the same time I think that road goes both ways. He’s on that committee because of his impressive history of innovative work in edtech for the past 20 years, that’s also why he’s at UMW right now. Him just being her has put the work happening on this campus on another level of national and international exposure—and he has only just started  🙂

Fact is, if you start chronicling the work we’ve been doing just through the 7 Things series, you start to see a pattern of serial innovation and exploration that not only has success in the research and development stages, but often takes root and becomes part and parcel of  the larger academic culture on campus—which for me is the real trick. But Innovation doesn’t just magically appear, it is born of a culture of freedom, a space that encourages open experimentation, failure (which we have a lot of too), and a shared sense of purpose—a common value system that we are all working towards to make the future of education as accessible and equitably distributed as possible, while at the same time maintaining the humane and interpersonal dimension of learning that makes the whole enterprise meaningful—serial innovation is a mission not a happy accident .

This entry was posted in dtlt and tagged 3dprinting, dtlt, umw. Bookmark the permalink.

4 Responses to 3D Printing: Another ELI 7 Things for UMW’s DTLT