A Serling Vision of Faith 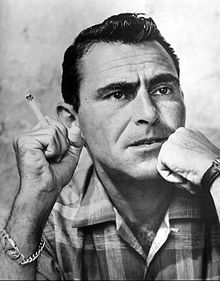 I was catching up on my RSS feeds last night when I came across this gem from Rod Serling via John Kenneth Muir—who is one hell of a b-culture blogger.

I think the destiny of all men is not to sit in the rubble of their own making but to reach out for an ultimate perfection which is to be had. At the moment, it is a dream. But as of the moment we clasp hands with our neighbor, we build the first span to bridge the gap between the young and the old. At this hour, it’s a wish. But we have it within our power to make it a reality. If you want to prove that God is not dead, first prove that man is alive.
– Rod Serling, December 3, 1968.

I’ve been thinking a lot about Sterling since the brilliant GNA Garcia suggested we run the Summer version of ds106 as a series of Twilight Zone episodes, an idea I am really excited about for a variety of reasons. I’ve be re-watching the videos of his writing seminar at Ithaca and reading as much as I can of the Twilight Zone Companion. I have a much longer blog post about my ideas of producing a class in this fashion, but let me end this particular post by saying Serling is the perfect conduit for such a manifestation of ds106 not just because The Twilight Zone was brilliantly bizarre, avant garde, low-budget, and popular (all of which it was), but because Serling had a vision of faith in humanity that we seem to have increasingly lost in the cannibalistic narratives of our cultural decline. Serling is not only relevant at this moment, he is desparately needed!

2 Responses to A Serling Vision of Faith