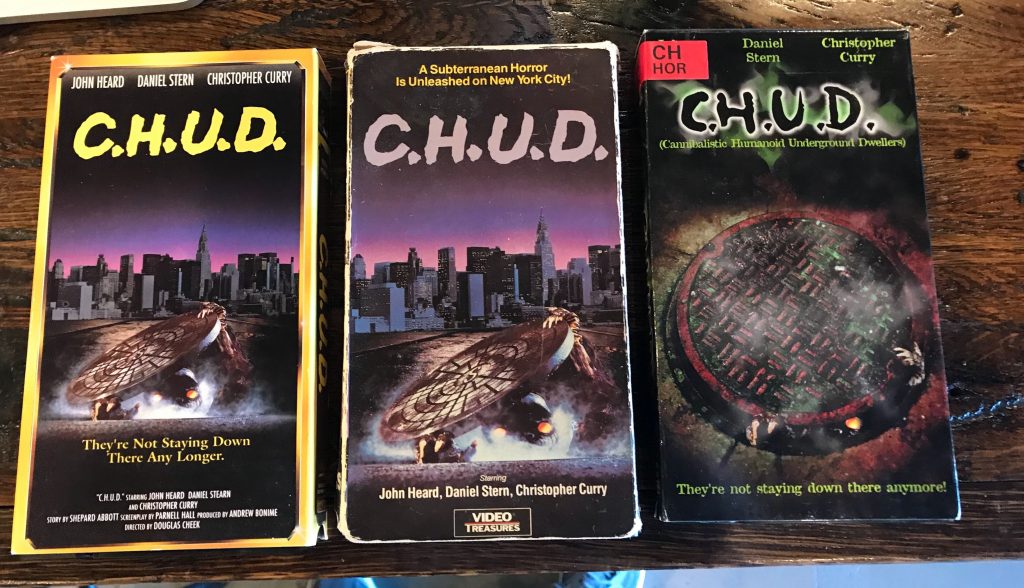 The various flavors of CHUD on VHS

Some might ask, “Why buy 3 different versions of C.H.U.D. on VHS? Isn’t that overkill?” The short answer is “Yes,” but the longer answer is and “Why the hell do you care? Are you some kind of minimalist, or worse the VHS police coming to tell me how to live my already pathetic life?” Fact is, I was experimenting with a particular favorite film of mine about various copies and the range in quality. For example, take a look at the differences between the tape to the right and the tape in the center below: 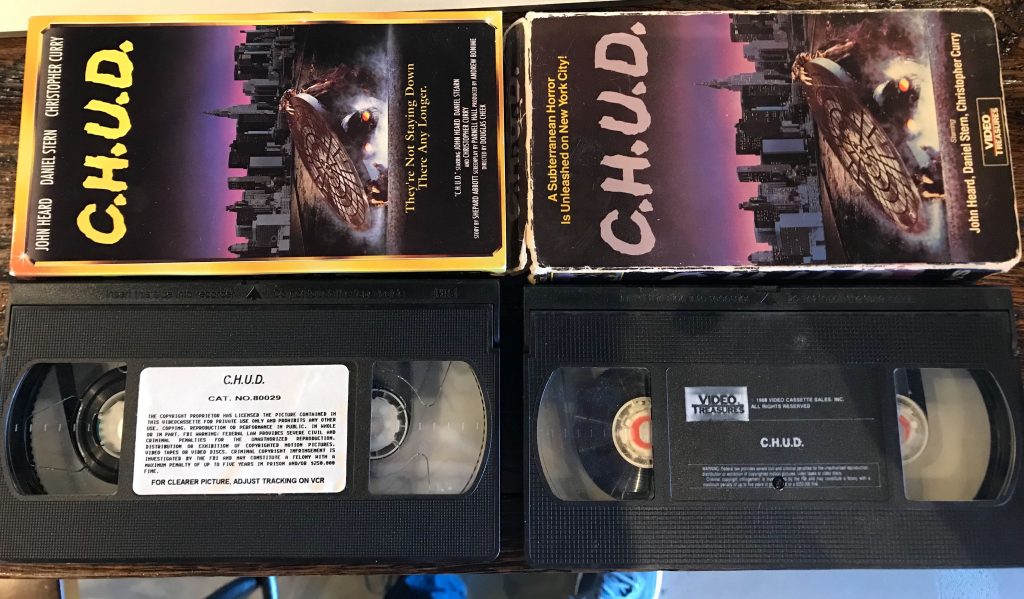 Besides the difference in label color, what else jumps out at you? Well, the fact that this 96 minute movie should have so much less tape in the video to the right versus the one on the left. There is more than twice as much tape on the right, which means that tape was recoded/transferred at a higher quality. This harkens back to recording speeds on your VCR back in the day:

The idea here is that you can make a 120 minute tape on SP last for as many as 4 hours on LP and 6 hours on SLP, so the slower the recording the higher the quality, and vice versa, the faster the recording the lower the quality but the more content you can get on a tape. The C.H.U.D. tape to the left is a Starmaker release, and they were known for their cheap copies, whee as the one on the right was by Video Treasures which was also known for their low-budget releases, but Video Treasures is fairly much better in this Pepsi Challenge fo VHS tapes. But these two tapes actually point to an interesting history of 1980s VHS tape distribution, given Video Treasures and Starmaker were competitors through much of the 80s and into the mid 90s before both were bought out and reformed as Anchor Bay Entertainment:

Anchor Bay Entertainment can date its origins back to two separate home video distributors: Video Treasures, formed in 1985,[2] and Starmaker Entertainment, founded in 1988. Both companies sold budget items — reissues of previously released home video programming — at discount prices. Video Treasures started with public domain titles, and later made licensing deals with Vestron Video, Heron Communications (including Media Home Entertainment and Hi-Tops Video), Britt Allcroft (the Thomas the Tank Engine series), Trans World Entertainment, Regal Video, Virgin Vision, Hal Roach Studios, Jerry Lewis, and Orion Pictures, among others. Starmaker’s major distributions were films from the then-recently out-of-business New World Pictures and programs previously licensed to their video division. Viacom programs and Saturday Night Live compilations were other notable Starmaker releases. The companies competed with each other for years, until they were sold to the Handleman Company, and formed a new corporate umbrella: Anchor Bay Entertainment, in May 1995.[3] The company also bought out (through the Video Treasures and Starmaker acquisitions) other budget home video and music distributors such as MNTEX Entertainment, Teal Entertainment, Burbank Video, Drive Entertainment, and GTS Records.[3] Both the Video Treasures and Starmaker labels were phased out a few years later.

It’s an interesting media landscape with the gobbling up of independent media distributors by larger conglomerates, and the New World Pictures mention here is interesting because Roger Corman’s company (which produced C.H.U.D.) was in the business in the late 80s and early 90s of buying up smaller, local television stations (changing their name to New world Communications) and their deal with Fox in 1994 to have those stations syndicate Fox (and Fox’s eventual purchase of New World Communications and their various regional outlets) led to the consolidation that cemented the rise of Fox as the shit show of news and media we have come to know and love to hate for the last 20+ years:

20th Century Fox (then owned by News Corporation), controlled by Rupert Murdoch, became a major investor in 1994 and purchased the company [New World Communications] outright in 1997; the alliance with Murdoch, particularly through a group affiliation agreement with New World reached between the two companies in May 1994, helped to cement the Fox network as the fourth major U.S. television network.

There is a lot of history in a throw away piece of media like a cheap Starmaker VHS tape. And to finish this off, the third C.H.U.D. tape, all the way to the right, is a 2001 tape released by Anchor Bay Media (at that point the STARZ subsidiary that swallowed both Starmaker and Video Treasures the previous decade) making for an interesting triptych of VHS media/cultural history. I have not inspected the Anchor Bay tape yet, and I know there is at least one other C.H.U.D. tape released by Media (which is identical to the Video Treasures tape), you can see an image I found on Ebay below: 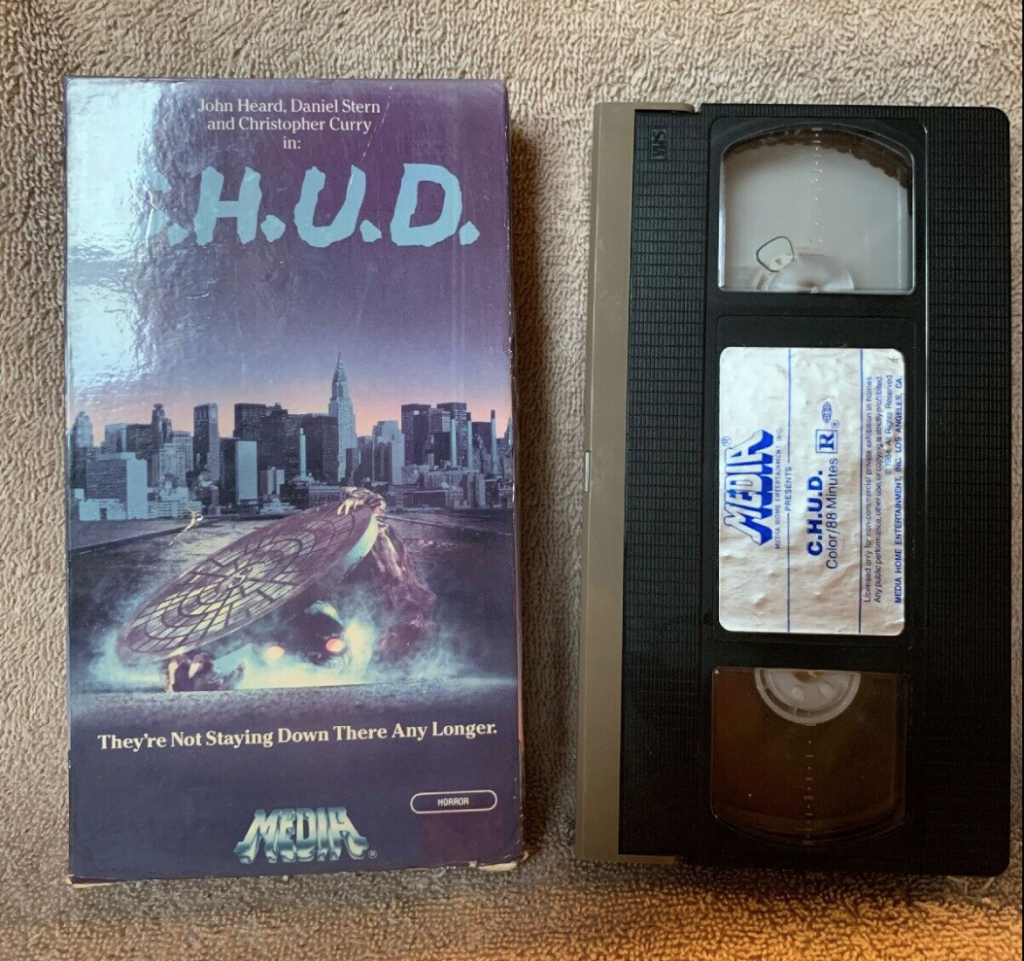 So, one of the things you start to realize when you begin collecting VHS tapes in earnest, which has become the case since Reclaim Video opened, is that the story of media during that decade is written on the jewel cases of history 🙂