An Explorer in “The Bishop of Battle” 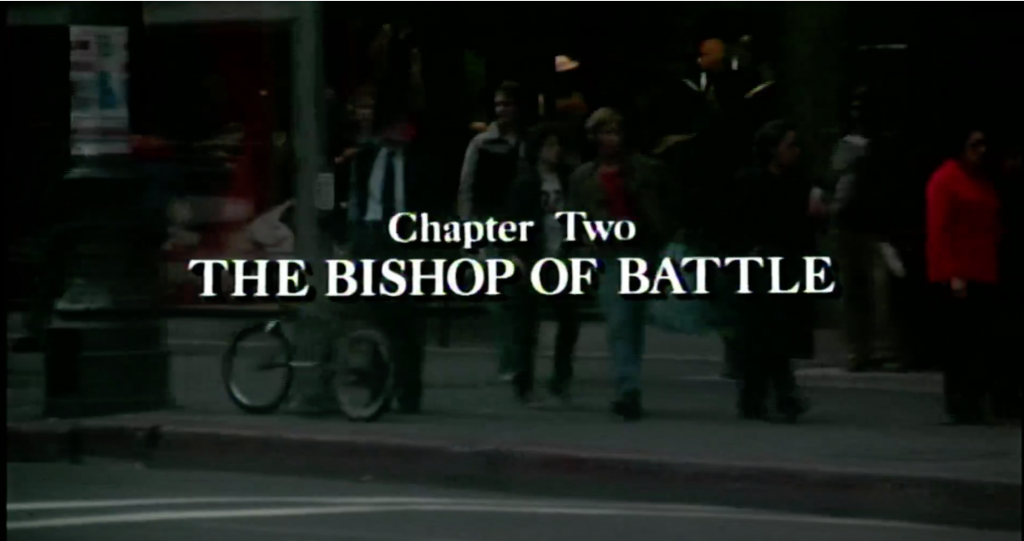 Chapter Two of Nightmares: “The Bishop of Battle”

I recently welcomed a new game into bavacade, namely Pleiades. The acquisition of which reminded me of a scene from a childhood favorite b-movie horror omnibus called Nightmares (1983). I just posted about this film and its relationship—at least in my mind—to another 80s cult classic Repo Man. As I mentioned in that post, there is a scene where JJ Cooney (Emilio Estevez) is hustling a kid out of money at Pleiades while listening to Fear’s “Let’s Have a War.” You can see that scene in the clip below:

And for those with a discerning arcade ear, you might realize the sound effects that they link with Pleiades are actually for Moon Cresta, but that may be outside your golden age of video games arcade trivia pay-grade.

Anyway, all that led me back to Nightmares to play one of my favorite movie games, identify the video game cabinet. I should do a whole series of posts on video games that show up in 80s movies—it speaks volumes to their ubiquity and also tells an interesting tale of just how popular arcade games were during the early 1980s. In terms of business revenue, I love this bit from the “golden age of arcade video games” Wikipedia page:

In 1982, the arcade video game industry’s revenue in quarters was estimated at $8 billion[22] surpassing the annual gross revenue of both pop music ($4 billion) and Hollywood films ($3 billion) combined that year.[22][23] It also exceeded the revenues of all major sports combined at the time,[23] earning three times the combined ticket and television revenues of Major League Baseball, basketball, and American football, as well as earning twice as much as all the casinos in Nevada combined.[24]

The idea that arcade games had more revenue than all major sports combined is mind-blowing, not to mention Hollywood and pop music. It’s easy to forget just how big a phenomenon they were in the early 80s, and while they never really lost steam in terms of growing popularity (in fact, they are once again bigger than Hollywood and professional sports combined in the US thanks to the pandemic) they can be easily overlooked given how ingrained into the culture they’ve become. So, it’s always interesting to see early 80s takes on arcades, video game addictions, delinquent youth, and punk rock—and “Bishop of Battle” has it all and more. But that’s not what this post is about, it’s actually about what I discovered when re-watching Nightmares, and this is where things get a bit geeky. 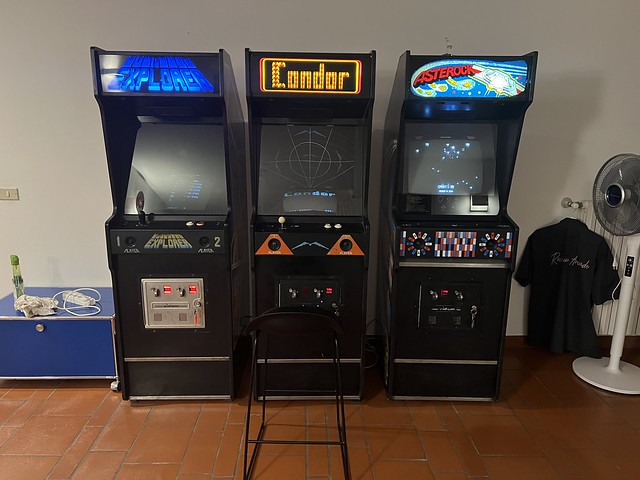 Over the last several years I’ve worked with Tim to create Reclaim Arcade, which has been a total blast and has pushed me into all kinds of cool corners of not only buying these old games but also repairing and restoring them. When it became clear during the pandemic I was not going back to the US anytime soon to enjoy Reclaim Arcade, I started collecting games here in Italy, hence the bavacade. One of the coolest things I discovered was a whole bootleg market in Italy wherein companies would “borrow” games from the US market (such as Asteroids, Scramble, Phoenix, Dig Dug, Galaga, Missile Command, etc.) and then reverse engineer them, re-name them, and create new cabinet designs to hop on the wave that was invading Europe as well. The premier Italian company doing this was Sidam, and I have three of their games: Asterock (Asteroids bootleg), Condor (Phoenix bootleg), and Explorer (Scramble bootleg). The Explorer cabinet’s side art is particularly beautiful, it is like panels from a comic book of an astronaut in space. 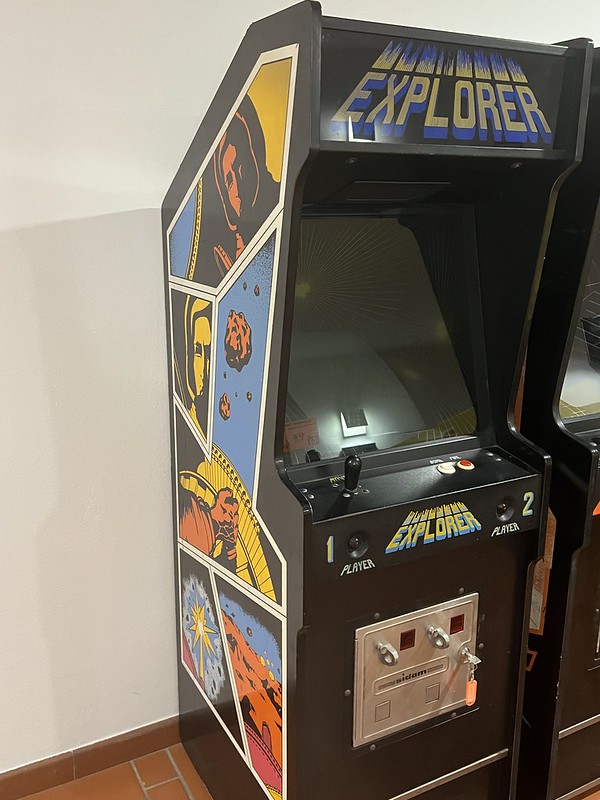 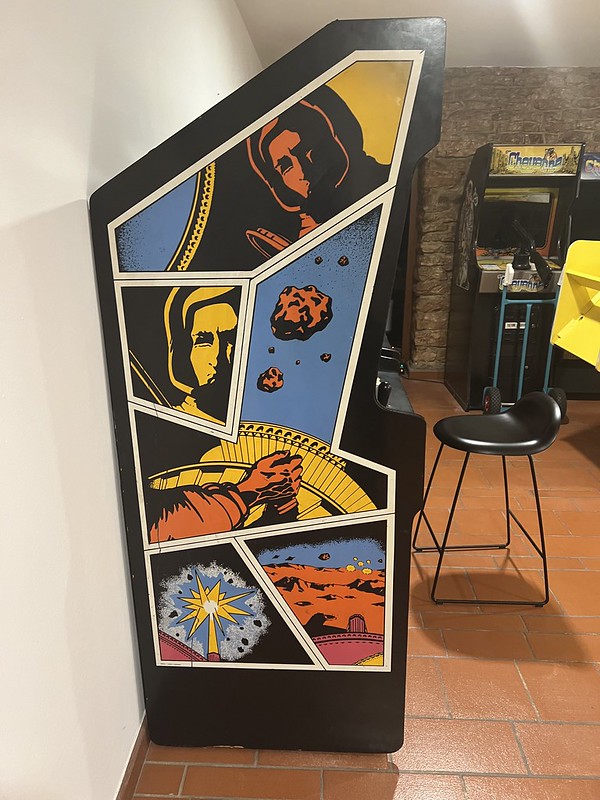 So, it struck me when I was searching for screenshots of the “Bishop of Battle” episode to come across side art from an Explorer: 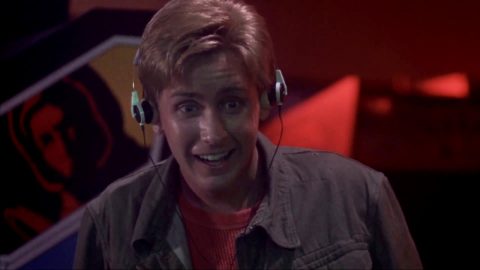 The Explorer side art in Bishop of battle

I recognized that red astronaut behind Emilio, that’s Explorer! I was pretty excited, and it prompted me to go through the scene in the arcade when JJ Cooney gets to the 13th level of the game, at which point it is no longer a game. The collapse of the virtual and real worlds is realized on level 13—kinda like the 13th floor—and the space shooter is now taking place within a mall arcade in the Valley. The animation for this sequence is pretty amazing, and according to the IMDB trivia page it almost killed the production given how much it ran over budget. 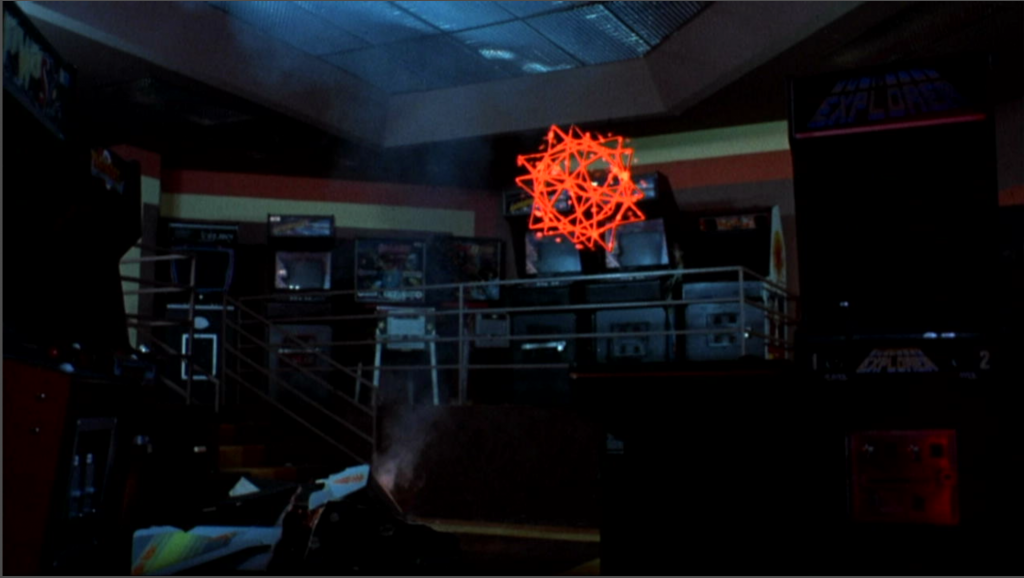 But back to Sidam’s Explorer, it actually plays a key role in this scene as the arcade cabinet that is routinely blown up by JJ Cooney as he tries to shoot the adversaries that have come out of the game into the arcade. Below you can get a good shot of the Explorer cabinet falling like a chopped tree: 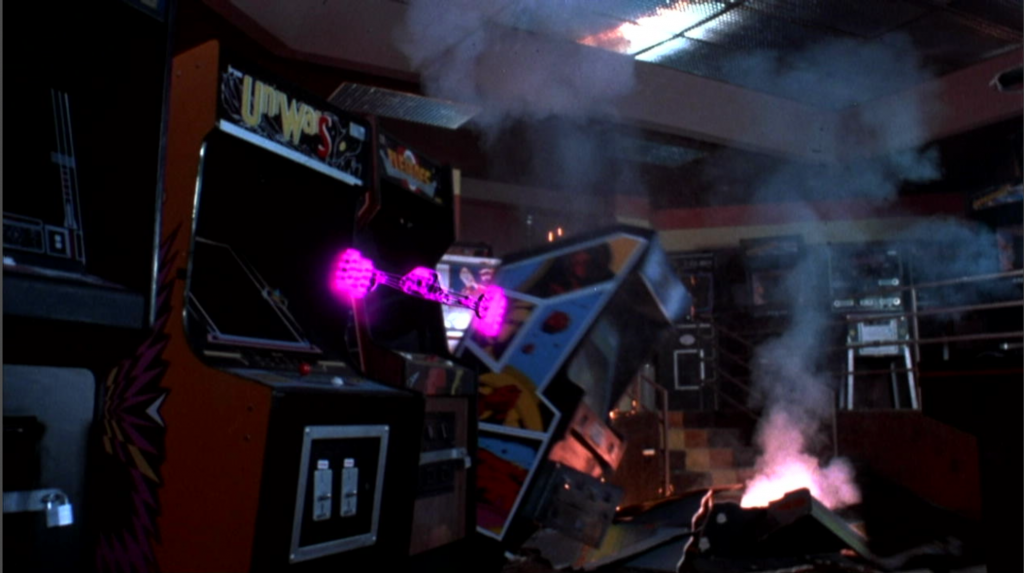 And sadly, below, you see the cabinet lying lifeless on the arcade floor. It breaks my heart. 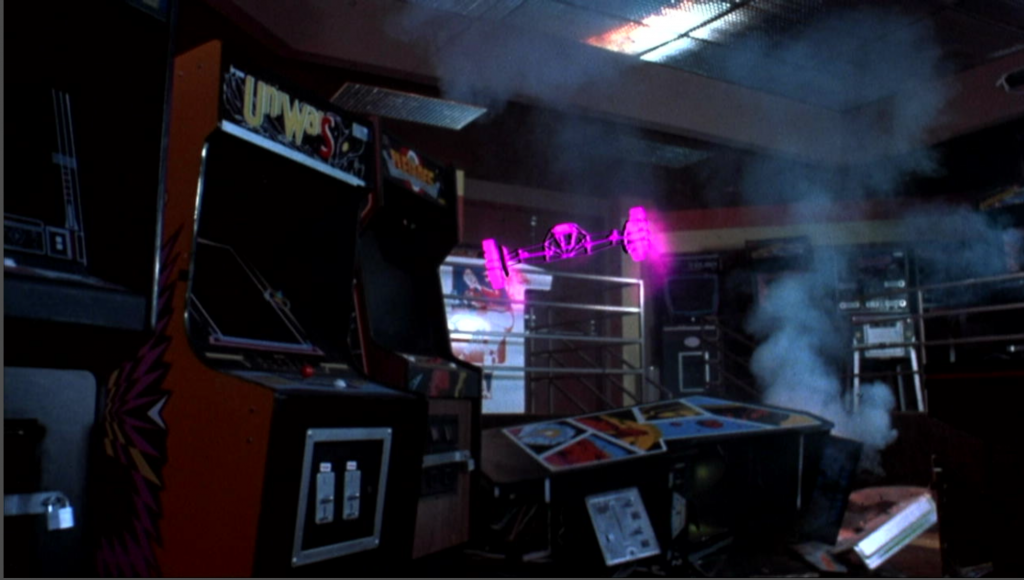 In the following shot you can just about glimpse the Explorer marquee as it is being shot for a second time in this sequence, turns out Explorer was one of the games they deemed unworthy enough to sacrifice multiple times. I mean it’s just an Italian-made knock-off of Scramble, which they already have in this arcade. And you don’t see them destroying an Asteroids, it’s way too valuable! 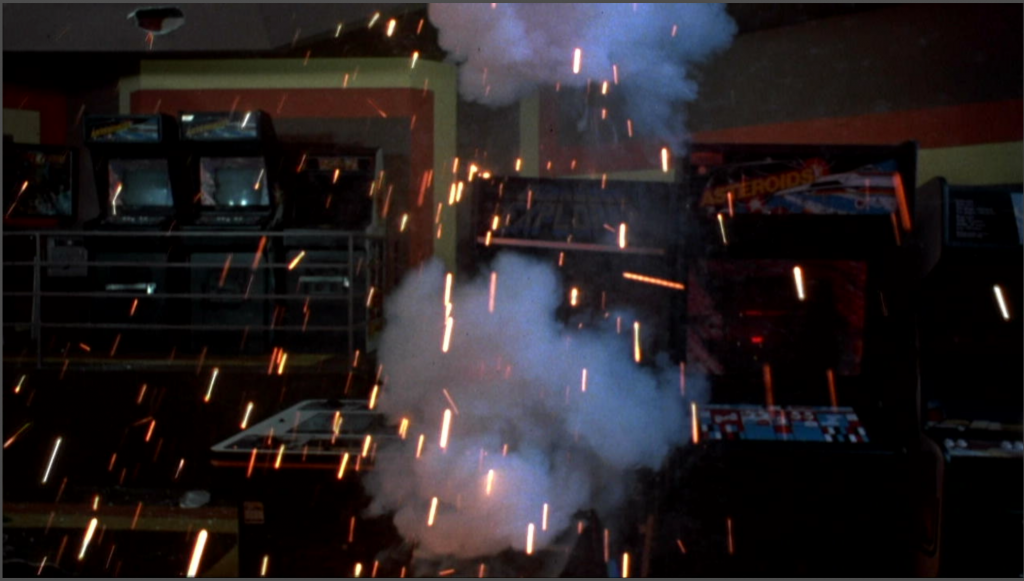 You can just make out the Explorer marquee in this shot

The morning after JJ’s late night exploits the Explorer can be seen, once again, lying dead on the floor. 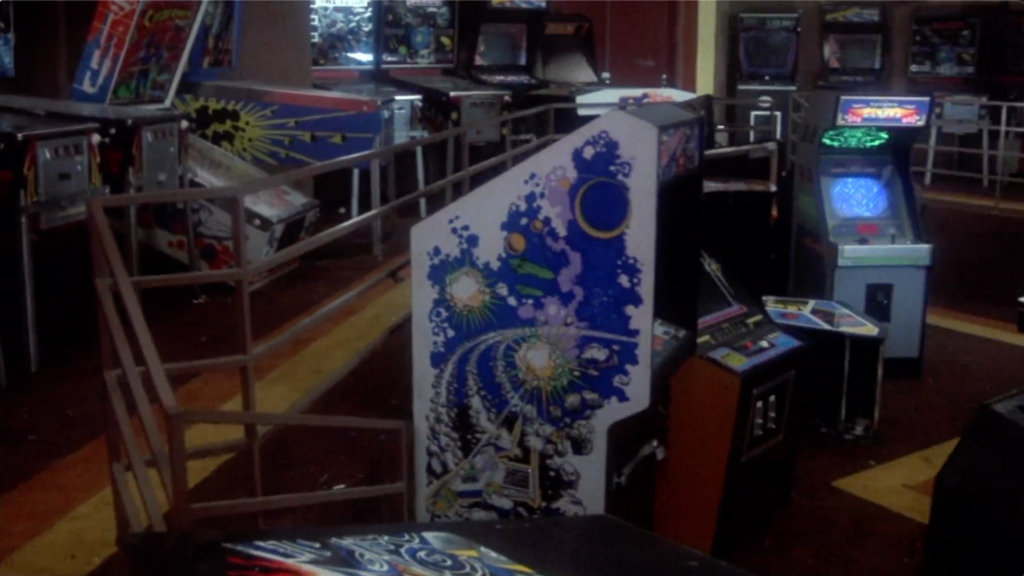 Image of a destroyed Explorer the morning after

And when the arcade proprietor, Willy, picks up a piece of the wreckage to bemoan the vandals, he grabs a broken part of the Explorer cabinet which can be identified by the side art. 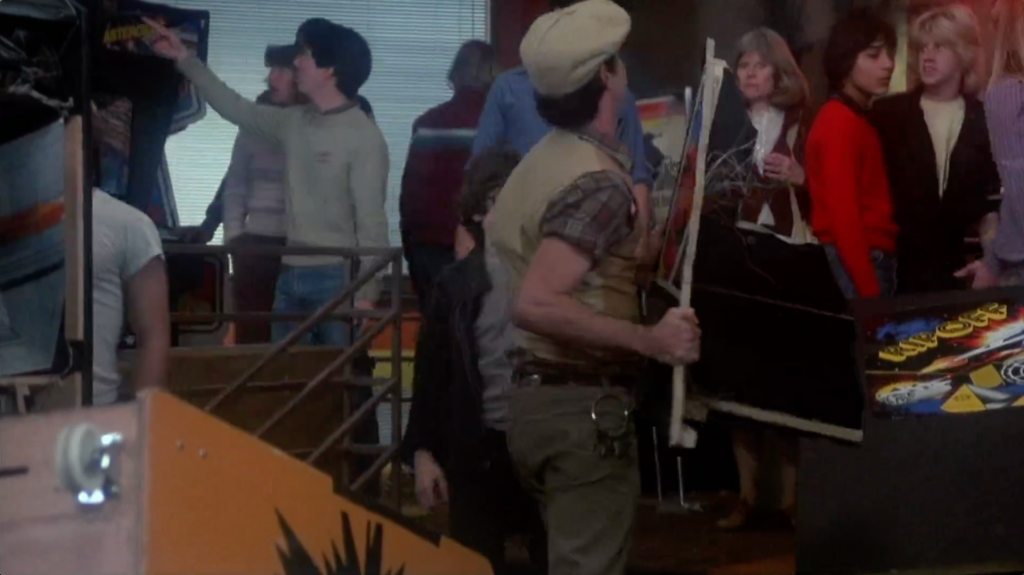 Willy, the arcade proprietor, removing a broken piece of the Explorer cabinet

It’s an Explorer bloodbath! I would really love to know how many of these Sidam cabinets made it to the US, and even more interesting—why? Seems like selling to US distributors/arcades would be against Sidam’s interests given they were clearly ripping the intellectual property off from US and Japanese companies, so it would behoove them to keep it in Europe. Anyway, not sure on those details, but following the fate of this Explorer was quite fun. It was a sacrificial lamb, and I can’t help but think its status as foreign fake, hence lesser, was part of that decision.

This entry was posted in bavacade, movies, video games. Bookmark the permalink.