An Invitation to a Hanging 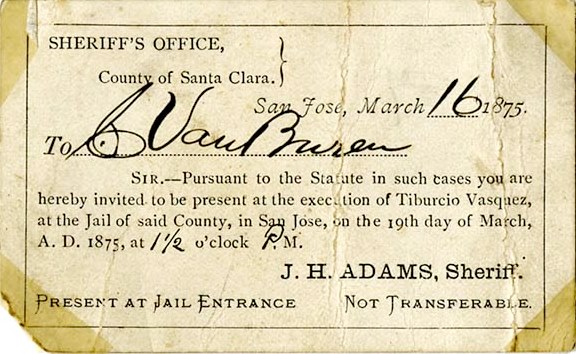 Invitation to attend the execution of Tiburcio Vasquez

We have been talking extensively about public execution narratives in the True Crime I am teaching, which made this scanned invitation to the 1875 hanging of California bandit Tiburcio Vasquez pretty freaking timely and awesome. Thank you, Tom Woodward!

I couldn’t help but search for details about the condemned, and what I found is quite fascinating. According to ExecutedToday.com (I love that site title!), Tiburcio Vasquez was…

Born to a respectable family (his grandfather was the first mayor of San Jose) when the land was under Mexican control, Vasquez was among the many chagrined to find themselves demoted to second-class citizenry by the norteamericano conquest of the Mexican-American War.

That occurred when Vasquez was in his early teens, and soon thereafter the young man was plying California’s ill-policed byways with the whole litany of depredations characteristic of the frontier outlaw: livestock rustling, highway robbing, shopkeep stickups.*

One of the latter furnished the proximate cause of his death and probably the most infamous single incident among his exploits: an armed robbery in Tres Pinos** that resulted in three shooting deaths and a serious manhunt.

For Vasquez, the end of the rope (last word: “Pronto”) was just the last act of a legendary career, of poetry and horsemanship and countless enchanted inamoratas. He was renowned in his own time, and has graduated since into a mythical, and potently symbolic, figure of the other peoples of the Golden West.

Despite the fact ExecutedToday.com has a different date and year for the exuction than the California Historical Society—the  former has  March 19th, 1879 whereas the latter has  March 16th, 1875—I like that they reference the Mexican-American War in imperialist terms, and immediately frame Vazquez as a victim of a hostile landgrab by the U.S. government as part and parcel of the manifest destiny of US expansion during the 19th century. This is a whole rich and complex area of US history, crime, and legend that I didn’t integrate into the course, but could and should have—there is always tomorrow! 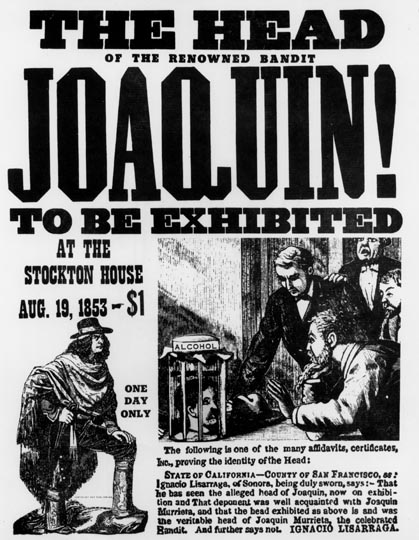 It reminds me of another California bandit with a very similar legendary status: Joaquin Murrieta.  His tale follows a narratie akin to that of The Outlaw Josey Wales. He ends up seeking revenge on the landgrabbing white power structure for robbing him of his stake, raping his wife, and lynching his half-brother. He goes on a rampage that has now gained legendary status, and the authorities even had a traveling exhibit of his severed head in 1853 to punctuate his death. From the Wikipedia article:

He and his band attacked settlers and wagon trains in California. The gang is believed to have killed up to 28 Chinese and 13 White-Americans.[3] By 1853, the California state legislature considered Murrieta enough of a criminal to list him as one of the so-called “Five Joaquins” on a bill passed in May 1853. The legislature authorized hiring for three months a company of 20 California Rangers, veterans of the Mexican-American War, to hunt down “Joaquin Botellier, Joaquin Carrillo, Joaquin Muriata [sic], Joaquin Ocomorenia, and Joaquin Valenzuela,” and their banded associates. On May 11, 1853, the governorJohn Bigler signed an act to create the “California State Rangers“, to be led by Captain Harry Love (a former Texas Ranger and Mexican War veteran).

The state paid the California Rangers $150 a month, and promised them a $1,000 governor’s reward if they captured the wanted men. On July 25, 1853, a group of Rangers encountered a band of armed Mexican men near Arroyo de Cantua near the Coast Range Mountains on the Tulare plains. In the confrontation, three of the Mexicans were killed. They claimed one was Murrieta, and another Manuel Garcia, also known as Three-Fingered Jack, one of his most notorious associates. Two others were captured.[4] A plaque (California Historical Landmark #344) near the intersection of State Routes 33 and 198 now marks the approximate site of the incident.

As proof of the outlaws’ deaths, the Rangers cut off Three-Fingered Jack’s hand and the alleged Murrieta’s head and preserved them in a jar of alcohol to bring to the authorities for their reward.[2] Officials displayed the jar in Mariposa County, Stockton, and San Francisco. The Rangers took the display throughout California; spectators could pay $1 to see the relics. Seventeen people, including a Catholic priest, signed affidavits identifying the head as Murrieta’s, alias Carrillo.

I actually read the John Rollin Ridge dime novel The Life and Adventures of Joaquin Murieta for a course during graduate school. An interesting fact about that text is that while the work is fiction, many have mistook it for a factual account—even a few historians. That line between histry, fact, and fiction would be an interesting one to examine in regards to true crime, as would larger themes such a text might raise such as violence and the West, Borderland fiction, national identities, race, ethnicity, and American imperialism.

Update: Forgot to mention that there was some uproar in Califronia earlier this year over a public school named after  Tiburcio Vasquez. Writing the history of the present, indeed.

4 Responses to An Invitation to a Hanging