Decentering Syndication or, a Push Away from RSS

Yesterday Steve Covello tweeted a post at wpmu.org my way.

I was prepared  to read about a premium suite of plugins that I could buy for the privilege, but was pleasantly surprised to find Chris Knowles’s post “How to Publish to Multiple WordPress Sites from a Single Install” to be a thoughtful, clear, and  beautifully documented articulation of how the spoke/hub model for pushing content from one site out to another works more generally in Content Management Systems, but for the purposes of his example in WordPress in particular. 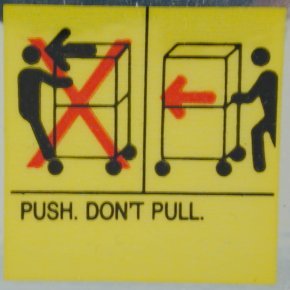 At first I was interested in this post to start showing faculty and students alike how they can use their WordPress sites to push content out to a number of different social media services like Facebook, Twitter, Tumblr, etc., but still keep their own version of everything they publish. That, for example, is one relatively simple and powerful reason to use such a spoke and hub model, you are the hub that pushes content out to the various spaces around the web you want it to appear.

But as we got talking in DTLT about this model at 9:30 this morning, it started to get much more interesting. In particular, the plugin that is pushing ones posts, images, videos, etc. in WordPress to all these different sites (what I’ll affectionately called “the pusher”) is  Syndicate out [Update: Tim and Martha tried Push Syndication but couldn;t get it to work so went with a similar plugin Syndicate Out]. One way to think about this plugin is it is does the absolute opposite thing then FeedWordPress, rather then pulling RSS feeds in, it uses XML-RPC to  push content out. So, as Marx did to Hegel, DTLT is doing to distributed course blogs—we’re standing syndication on its head 🙂 Rather than insisting on making the course the hub as has been the case with ds106 (and scores of courses sites on UMW Blogs over the years), why not decentralize the syndication and allow each of the sites to push their content to the hub. Same effect, jut a different approach.

But why? What are the benefits? 1)  it is techncially inline with the ethos of giving the students more control over their work; they can control the syndication in this regard because “the pusher” plugin is installed on their blog. 2) It is far simpler than FeedWordPress for faculty to get up and running with—you don’t have to ask faculty to load in tens of feed URLs for the syndication engine to work. 3) It’s immediate, with XML-RPC, there is no wait for the post to show up. Publishing on the course hub is immediate. 4) It allows for both students and faculty alike to become a hub or a spoke. When I was at the Reclaim Open hackathon at the MIT Media Lab in April Kin Lane was conceptualizing the Reclaim Your Domain around this idea. 5) Less load on the server CPU pulling 100s feeds as weas the case in ds106, in this model you decenter that to a distributd push. 6) The whole process can be automated to some great degree on both the Reclaim Hosting and the Domain of One’s Own server thanks to Installatron. Tim Owens did a mock-up of what this might look like for students and faculty alike. 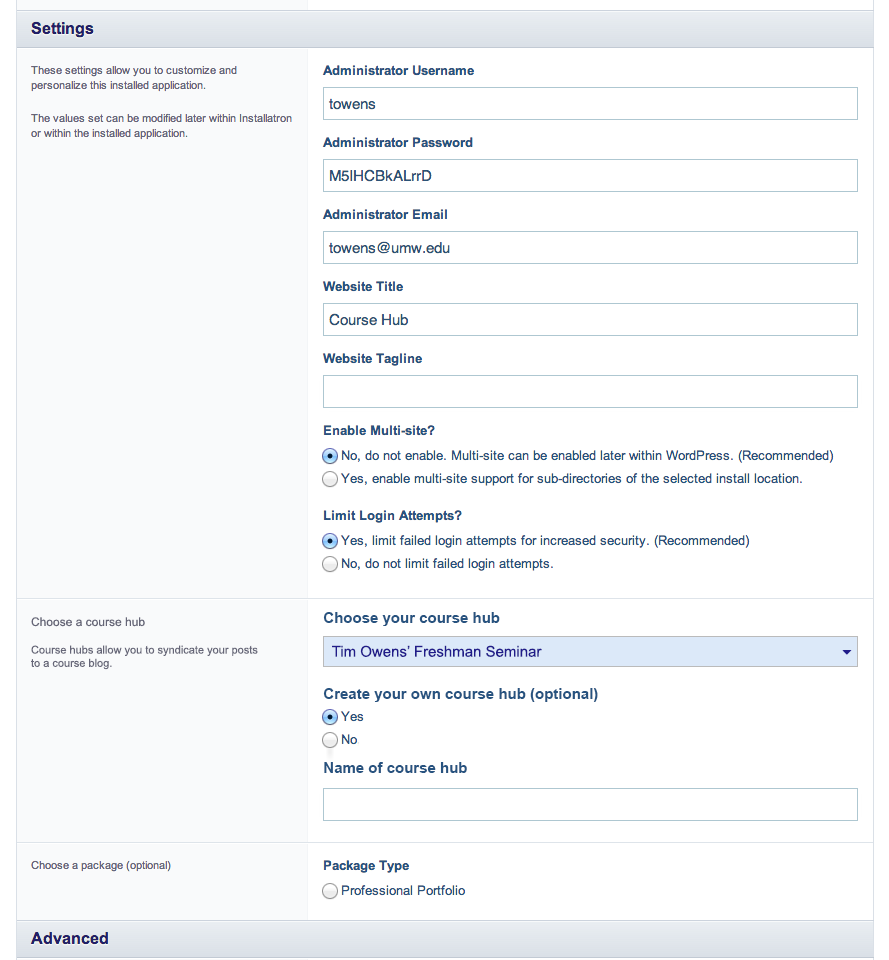 When going through the process of installing a WordPress site in Installatron (pictured above), we can actually build in a dropdown list of courses that you want to publish to from your own site. Martha Burtis, who has been working on the idea of packaging WordPress plugins suites  in Installatron already, is seeing if we can’t get the Syndicate Out plugin to not only get automatically installed and activiated on the student (or spoke) blog, but also identify the hub it will be publishing to based on the dropdown selction. If a student or faculty member choses to create a course on the fly by selecting that option and then naming it accordingly, it will immediately populate in the dropdown along with  a unique identifier. Instantaneously it will allow others to subscribe to it seamlessly. All of this with no mention of RSS! EDUGLU heresy, and I love it!

Thinking out loud here, what Howard Rheingold labored through for his Social Media Issues site, which admittedly is awesome, could be accomplished at the server level with next to no overhead. This is the in-a-box that we actually need to make synidcation course practical in highered. It is a bit hazy here for me (as much of it is right now), but I  think we can manage copy all the login information from the student blogs into the hub at the level of Installatron by grabbing their username and password and copying them to the hub database.  In other words, every student and faculty in such an environment becomes a spoke and/or hub, the idea of the motherblog becomes deprecated  and we start to move toward a more decentered approach wherein each learner can control what syndicates where.

And this is just the beginning, this model would also allow students with a Domain of One’s Own blog at UMW to use the Syndicate Out plugin to seamlessly send their posts out to any UMW Blogs blog they’re an author of. We tried it out today, and it’s absolutely seamless. You can see the spoke post here and the hub republishing on jimgroom.umwblogs.org here. So cool.

We still have a lot to figure out with all this, but as we were talking about it today we started recognizing the fact that Domain of One’s Own has already given way to Reclaim Hosting, Installatron plugins and theme packages, and now a whole new way of approaching spoke/hub syndication models for courses. And I firmly believe this is just the beginning of a whole new level of re-conceptualization, experimentation, and innovation—we’re just now realizing that Domain of One’s Own is more than just giving everyone a domain, WordPress blog, portfolio site, etc.— it’s quickly beginning to feel like a  paradigm shift for what’s possible when it comes to digital publishing at UMW and beyond. It’s actually kinda hard to explain just how exciting it is to go to work these days—my head is constantly buzzing, it’s almost hard to think, no less concentrate, on anything else. DTLT is in the zone right now….

This entry was posted in Domain of One's Own, reclaimopen, umw, UMW Blogs, Uncategorized and tagged domain of one's own, push, reclaimhosting, reclaimopen, rss, syndicate out, syndication. Bookmark the permalink.

16 Responses to Decentering Syndication or, a Push Away from RSS