While looking up information regard Benjamin Franklin’s short newspaper article from 1734 titled “The Death of a Daughter” I found this bit of sensationalism—or is it?—on the Huffington Post: 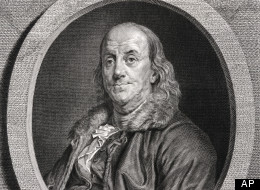 Was Benjamin Franklin secretly a serial killer? Historians say this is unlikely.

While working on the renovation of Benjamin Franklin’s London home, a construction worker found something odd: a small pit in a windowless basement room.

Inside, sticking through the dirt floor, was a human thigh bone.
Ultimately, 1,200 pieces of bone were recovered, and initial examinations revealed that the bones were the remains of 10 bodies, six of them children, and were a little more than 200 years old.

Where’s the CSI: Colonial Crimes Division when you need them?