The #ds106radio love unrepentantly continues on the bava, and I took some time out early this week to finally experiment with Audio Hijack, and I’m glad I did. And before you ding me for Mac-based radio tutorial, I can gladly point you to David Kernohan’s “banana in the tailpipe” tutorial for getting up and running on ds106radio with Windows! This post won;t really be a proper tutorial, although this is the Youtube video I referenced to get my Audio Hijack connection set to broadcast in about two minutes:

I spent another 30 minutes futzing live on the radio trying to figure out my inputs and recording my findings. It was an experimental futzing session with the accurate assumption no one was listening. I was able to get my Audio Hijack settings in a pretty good space: 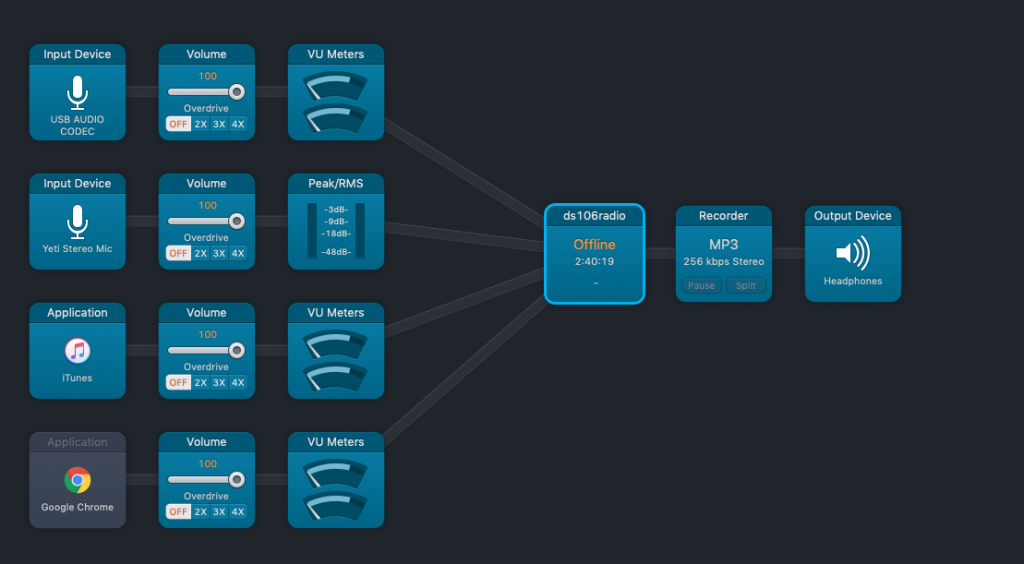 My Audio Hijack setup for #ds106radio

I have my turntable (USB Audio Codec) and Yeti mic as two inputs with peak and VU meters (which will keep Nigel off my back 🙂  and at the moment I am using using iTunes and Chrome as two other audio sources.* All of which are going into the radio broadcast, which I am then recording locally and monitoring with my headphones. It is slick, and the fact I have the broadcaster built-in means I do not need Ladiocast anymore, and can use Loopback for more specific use-cases for the radio and or ds106.tv. It was also really helpful to see Anne-Marie Scott’s setup so I could try and figure out where I was

I really liked the way she broke up the sources into a kind of broadcasting pyramid work-flow, so I want to re-work mine accordingly. Anne-Marie has been DJing the awesome triumvirate of radio:  Tannis Morgan, Maren Deepwell, and herself every Sunday evening at 11 Am PST, which is the most respectable radio on the #ds106radio air alongside the South pacific, which is holding down like a mothertrucker as I write this right now. Did I mention the radio is good lately?

Anyway, here is my futzing cast getting Audio Hijack working on the radio, which is not at all instructive by any means, but it is a pretty good recording 🙂

This entry was posted in ds106radio and tagged audio hijack, ds106radio. Bookmark the permalink.

5 Responses to Audio Hijack the #ds106radio