bava in the cloud with clusters

Last weekend I took a small step for the bava, but potentially a huge step for Reclaim Hosting. This modest blog was migrated (once again!) into a containerized stack in the cloud in ways we could only dream about 7 years ago. There is more to say about this, but I’m not sure now is the right time given there is terror in the streets of the US of A and the fascist-in-charge is declaring warfare on the people. What fresh hell is this?!  But, that said, I’ve been hiding from American for years now, and quality lockdown time in Italy can make all the difference. Nonetheless, I find myself oscillating wildly between unfettered excitement about the possibilities of Reclaim and fear and loathing of our geo-political moment. As all the cool technologists say, I can’t go on, I’ll go on….

For anyone following along with my migrations since January, there have been 4 total. I migrated from one of Reclaim Hosting’s shared hosting server’s in early January because the bava was becoming an increasingly unpredictable neighbor. The HOA stepped in, it wasn’t pretty. So, it meant new digs for the bava, and I blogged my moved from cPanel to a Digital Ocean droplet that I spun up. I installed a LEMP environment, setup email, firewall, etc. I started with a fresh Centos 7.6 sever and set it up as a means to get more comfortable with my inner-sysadmin. It went pretty well, and costs me about $30 per month with weekly backups. But while doing a migration I discovered a container-based WordPress hosting service called Kinsta which piqued my interest, so I tried that out. But it started to get pricey, so I jumped back to Digital Ocean in April (that’s the third move) thinking that was my last.*

But a couple of weeks later I was strongly considering a fourth move to test out a new platform we’re working on, Reclaim Cloud, that would provide our community a virtualized container environment to fill a long-standing gap in our offerings to host a wide array of applications run in environments other than LAMP. I started with a quick migration of my test Ghost instance using the one-click installer for Ghost (yep, that’s right, a one-click installer for Ghost). After that it was a single export/import of content and copying over of some image files. As you can see from the screenshot above, while this Ghost was a one-click install, the server stack it runs on is made visible. The site has a load balancer, an NGINX application server, and a database which we can then scale or migrate to different data centers around the world.

In fact, geo-location at Reclaim for cloud-based apps will soon be a drop-down option. You can see the UK flag at the top of this one as hope springs eternal London will always be trEU. This was dead simple, especially given I was previously hosting my Ghost instance on a cPanel account which was non-trival to setup. So, feeling confident after just a few minutes on a Saturday, I spent last Sunday taking on the fourth (and hopefully final) migration of this blog to the Reclaim Cloud! I’ve become an old hand at this by now, so grabbing a database dump was dead simple, but I did run into an issue with using the rsync command to move files to the new server, but I’ll get to that shortly.

First, I had to setup a WordPress cluster that has a NGINX load balancer, 2 NGINX application servers, a Gallera cluster of 3 MariaDB databases, and a NFS file system. Each of these are within their own containers, pretty cool, no? But don’t be fooled, I didn’t set this up manually—though one could with some dragging and dropping—the Reclaim Cloud has a one-click WordPress Custer install that allows me to spin-up a high-performance WordPress instance, all of which are different layers of a containerized stack:

And like having my own VPS at Digital Ocean, I have SSH and SFTP access to each and every container (or node) in the stack.

In fact, the interface also allows access and the ability to edit files right from the web interface—a kind of cloud-based version of the File Manager in cPanel. 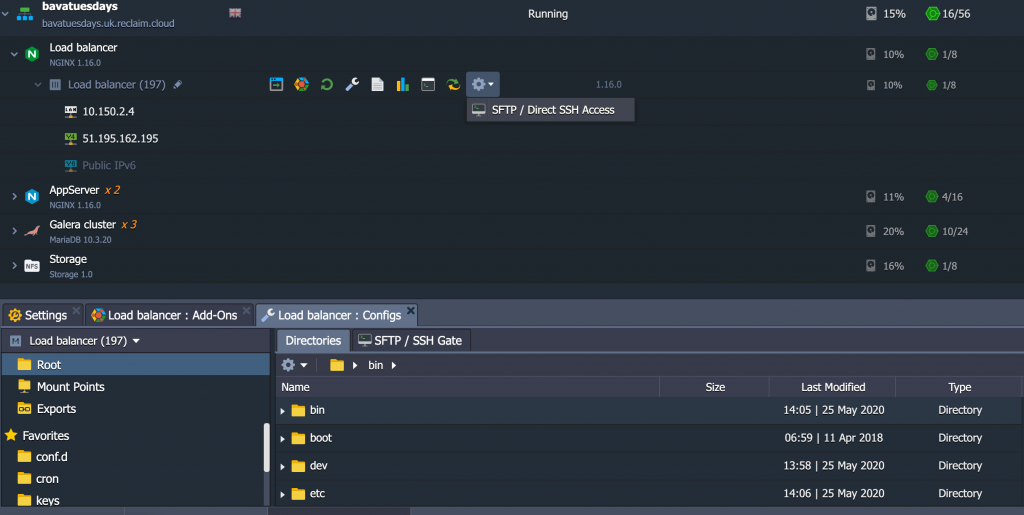 I needed SSH access to rsync files from Digital Ocean, but that is where I ran into my only real hiccup. My Digital Ocean server was refusing the connection because it was defaulting to a SSH key, and given the key on the Reclaim Cloud stack was not what it was looking for, I started to get confused. SSH keys can make my head spin, Tim explained it like this:

I never liked that ssh keys were both called keys. Better analogy would be “private key and public door”. You put your door on both servers but your laptop has the private key to both. But the key on your laptop is not on either server, they both only have the public door uploaded. On your laptop at ~/.ssh you have two files id_rsa and id_rsa.pub. The first is the key. Any computer including a server that needs to communicate over ssh without a password would need the key. And your old server was refusing password authentication and requiring a key.

That’s why Timmy rules, after that I enabled the prompting of an SSH server password when syncing between the Cloud and Digital Ocean using this guide. After that hiccup, I was in business. The last piece was mapping the domain :

And issuing an SSL certificate through Let’s Encrypt: 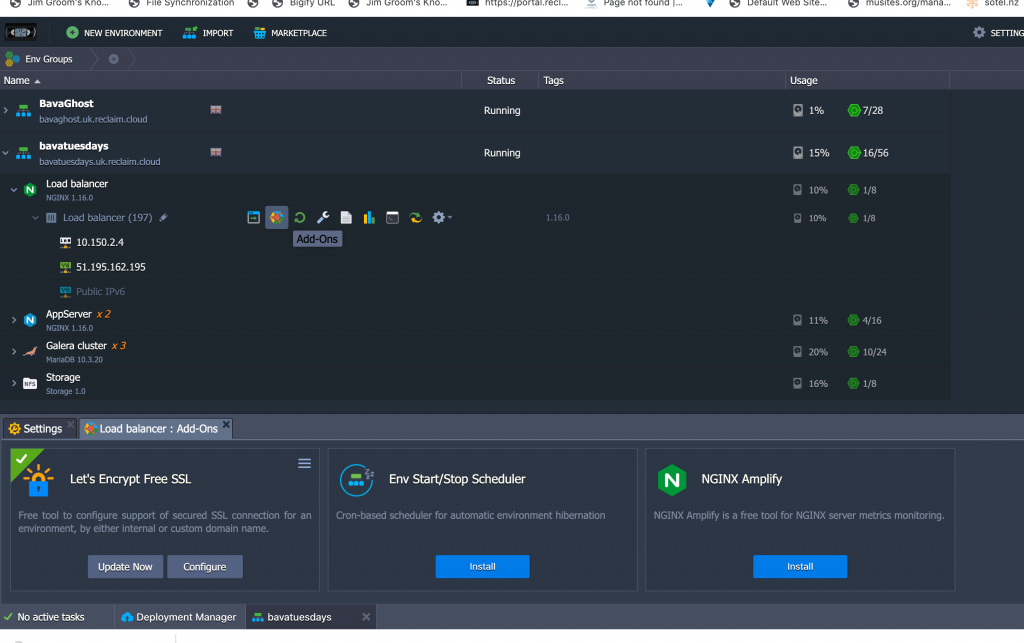 It’s worth noting here that I am using Cloudflare for DNS, and once I pointed to the new IP address and cleared the local hosts file on my laptop the site resolved cleanly with https and was showing secure. Mission accomplished. I was a cloud professional, I can do anything. THE BAVA REIGNS! I RULE!  Ya know, the usual crap from me.

But that was all before I was terribly humbled by trying to migrate ds106.us the following day. That was a 5-day ordeal that I will blog about directly, but until then—let me enjoy the triumph of a new, clustered day of seamless expansion of resources for my blog whenever resources run high. 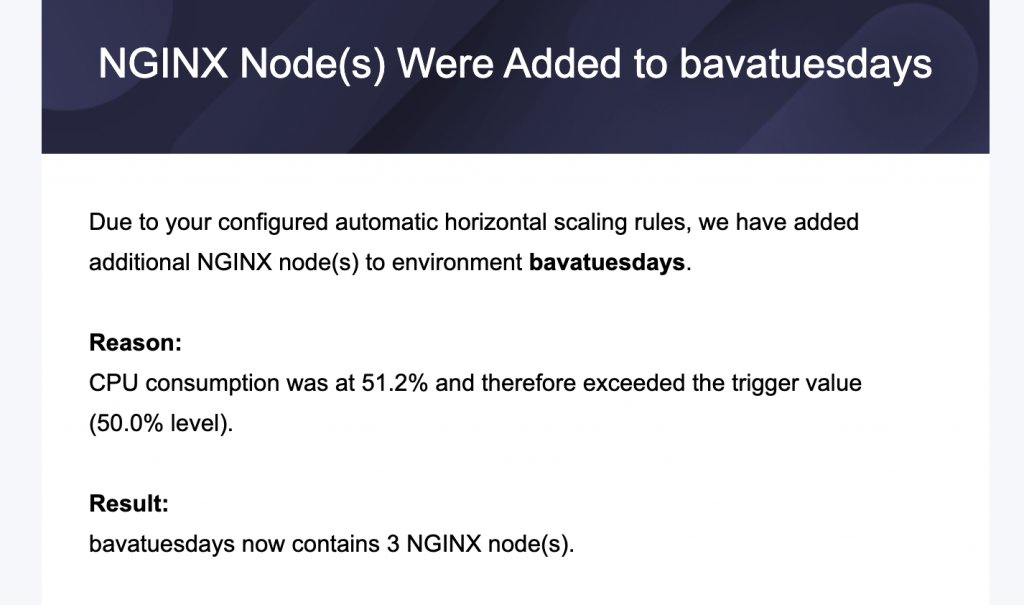 I woke up to this email which is what the clustering is all about, I have bavatuesdays set to add another NGINX application server to the mix when resource on the existing two go over 50%. That’s the elasticity of the Cloud that got lost when anything not on your local machine was referred to as the cloud. A seamlessly scaling environment to meet the resource demands, but only costing you what you use like a utility was always the promise that most “cloud” VPS providers could not live up to. Once the resource spike was over I got an email telling me the additional NGINX node was spun down. I am digging this feature of the bava’s new home; I can sleep tight knowing the server Gremlins will be held at bay my the elastic bands of virtualized hardware.

*I worked out the costs of Digital Hosting vs Kinsta, and that was a big reason to leave Kinsta given the bava was running quite well in their environment.

N.B:  While writing this Tim was working on his own post and he found some dead image links on the bava as a result of my various moves, and with the following command I fixed a few of them 🙂
wp search-replace 'https://bavatuesdays.com/wp-content/uploads' 'https://bavatuesdays.com/wp-content/uploads'
….
Made 8865 replacements. Please remember to flush your persistent object cache with `wp cache flush`.

4 Responses to bava in the cloud with clusters