Bava moves to Kinsta, story at 11

It’s been surreal here in Northern Italy, and the last thing the world needs right now is another hot take on the Corona Virus or teaching online in the age of pandemics. My turn over the least 10 years has been to explore new (and old) web-based environments possible for teaching and learning, and frankly the syndicated, asynchronous and distributed learning environment sounds pretty good right about now. Throw in some radio, and it is near on perfect 🙂

But I profess and digress, but at least it’s not on Twitter. The point of this post is simply to chronicle my migration of this blog from Digital Ocean (DO) to Kinsta yesterday. I created the DO droplet back in January and documented the process (find the blog posts here, here, here, and here). I learn a ton from these projects and WordPress continues to be the tool I use and learn about the web through the lens of. I recognize the limitations therein, but that said I only have so much emotional labor to spare! So when I was doing a migration from Kinsta to Reclaim Hosting I became really intrigued by Kinsta’s model, to quickly re-iterate here they provide container-based WordPress instances, and their service is built on top of Google’s Cloud platform.

They provide what they call “premium” WordPress hosting, which comes at a price. At the lowest end of the spectrum it costs $30 per month, which is as much as a year’s hosting at Reclaim—and we even throw in a domain. But they aren’t really geared towards the same audience, they are positioned to serve folks how have a site that needs to scale resources seamlessly for both traffic spikes and quick growth. Like I said in my previous post, it reminds me of a dead-simple, elastic Amazon Web Services (AWS) EC-2 instance for those who don’t have the sysadmin chops but need to run a beefy, mission critical WordPress instance. But like AWS, resources come at a premium, but I’ll talk about that later on in this post.

For now let me focus on the migration and Kinsta’s stellar support. I actually tried to migrate the bava from my DO instance two days ago, but I ran into issues because my Kinsta container runs over port 51135, and I could not cleanly move a zipped up copy of my files between servers. The following was the command I used when logged into my DO server, but I kept getting connection errors. Below is a stripped version of the scp command I used

I jumped on chat support* and I was almost immediately answered by Ruby who told me there may be issues with my DO instance blocking port 51135, which turned out to be correct, I just was not smart enough to open it. Given the bava is almost 9 GB of files, SFTP is out of the questions given with my current upload speed it would take 12+ hours. Whereas a scp between servers takes literally minutes for a 9 GB zip file. I left things alone for the day as work at Reclaim started to gear up, but returned to it yesterday early with the idea of  actually moving the instance of bavatuesdays I had on Reclaim servers before migrating in January. This would have almost all the same files save anything uploaded after mid-January, which is an easy fix. I unblocked port 51135 on the old server and tried the scp command to the Kinsta container and it worked, 9 GB moved in 6 minutes.

That was awesome, but when I tried unzipping the directory on Kinsta’s server I was getting disconnected from the server:

I jumped on the chat support, and Ruby once again bailed me out suggested I use the external Ip address for this rather than the internal given it is often more table. Boom, that worked. I was able to swap out the images I was missing since January, and my site was now on Kinsta. A few things I really appreciated was dead simple SSL cert and forcing of SSL through the tools panel: 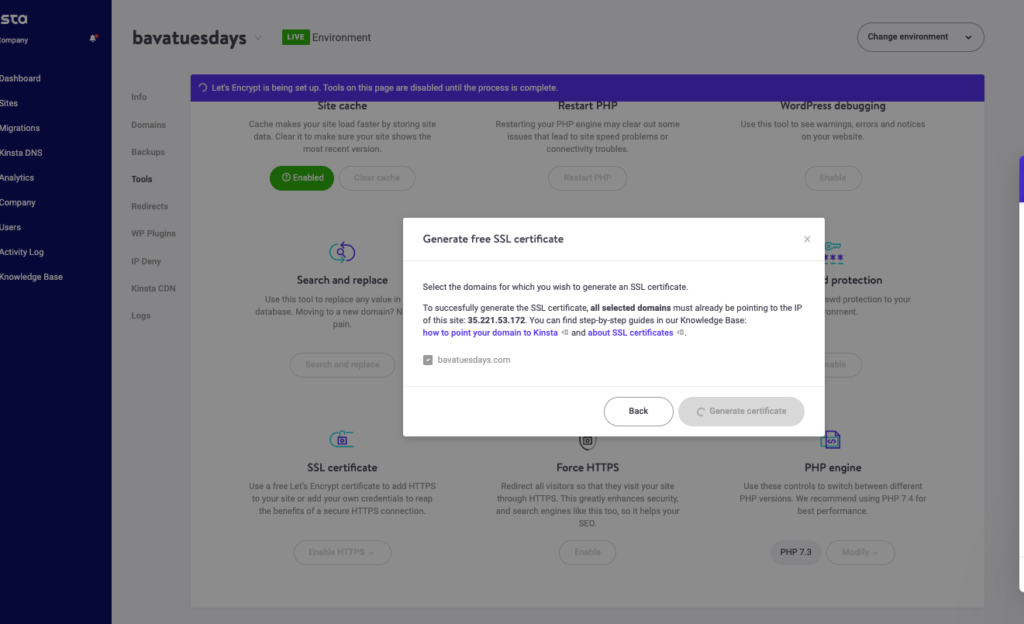 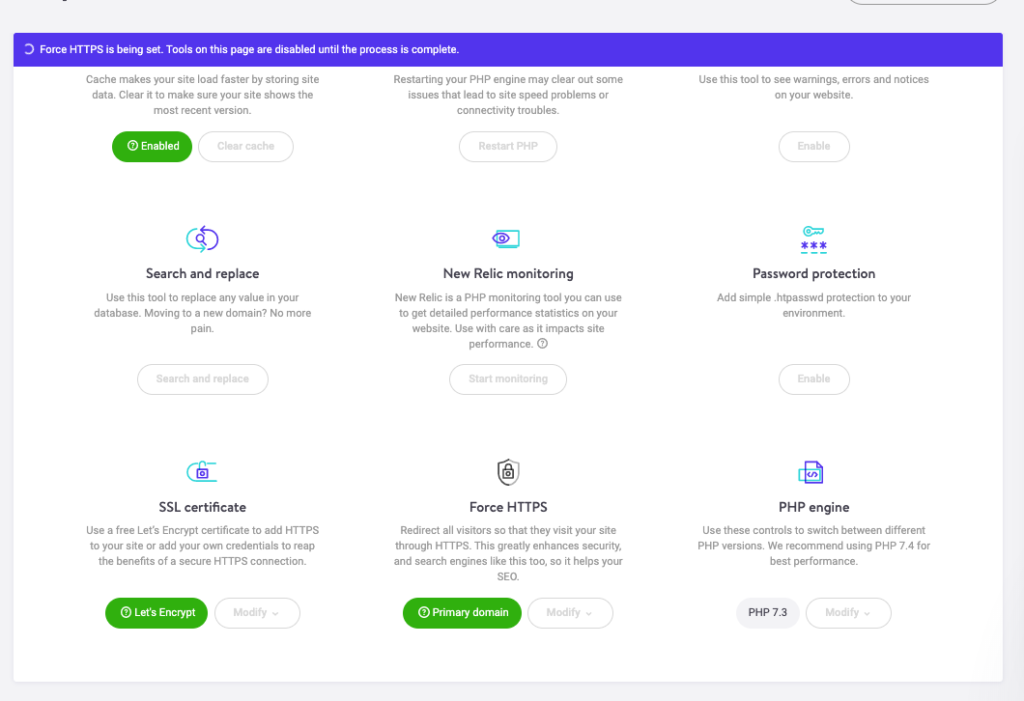 After that, I tried upgrading to PHP 7.4, and that was dead simple too, all seemed to work, but the WordPress debugging tool showed me there was an issue with the Crayon Syntax Highlighter plugin for anything above PHP 7.2 (it was actually breaking any post with it embedded, which is annoying) so I reverted to 7.2 for now, but I should know better than to use plugins 4 years out of date. I am pointing my domain from my Reclaim cPanel, so no need for Kinsta’s DNS controls, but always interesting to see how they handle that: 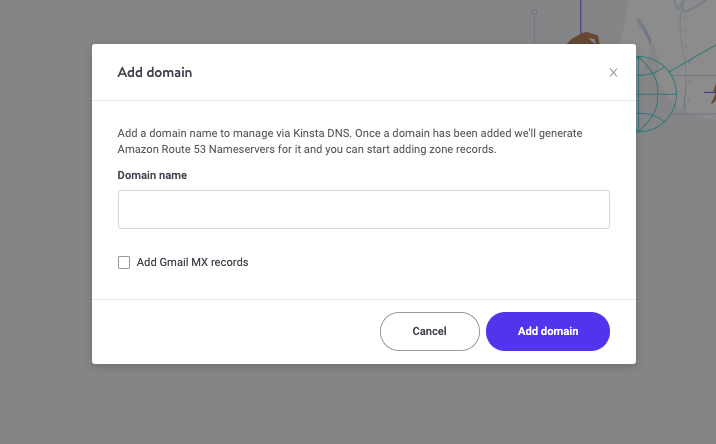 Using Amazon Route 53, just like Reclaim, and I might have to add a domain to see how the controls look, and I do like the Gmail MX records radio button given that would, I imagine, pre-fill the records given they’re predictable, and be entirely out of the email game is a beautiful thing! 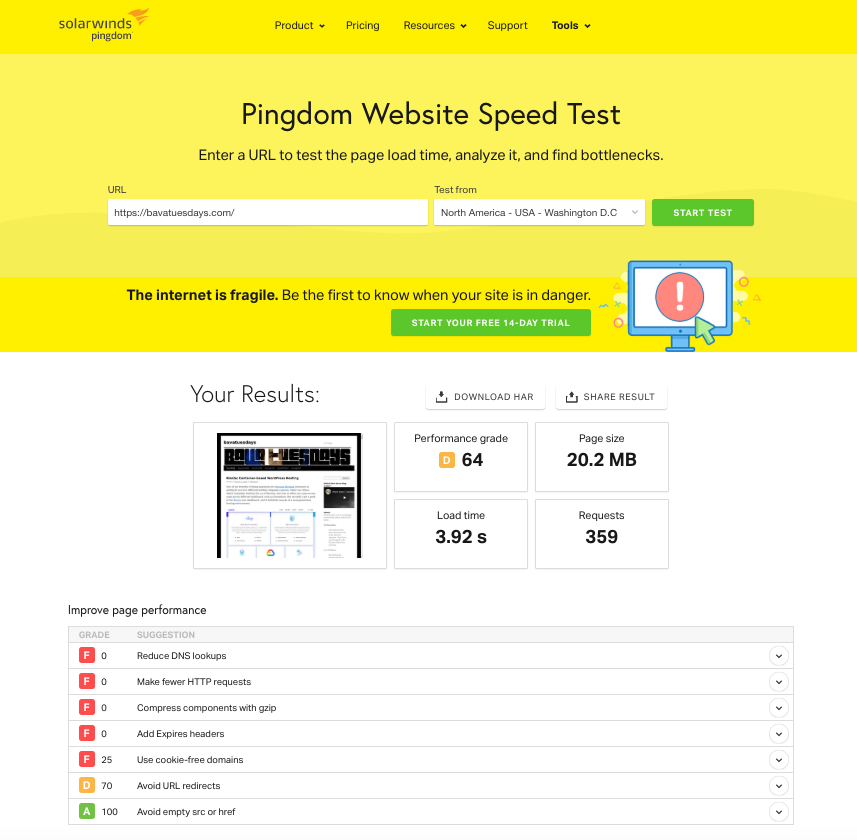 Kinsta has built-in caching for sites (need to look more into the details behind that) and they also have a CDN tool, something I’ve never used on the bava, so I wanted to try that out to see if it speeds things up. Now, it is kinda of a joke to say that because speeding my site up means getting it to load under 4 seconds given I load images on heavy, and I never get a rating above D from Pingdom’s speed tester, but I am feeling the site is a bit snappier regardless 😉

So, I got caching, CDN loading, and the like. Now when I moved to Kinsta I was un-phased by there 20,000 unique hits limit for the $30 plan given I average about 100-200 daily hits on the bava according to Jetpack—I’m not as big in Japan as I once was 🙂 But this morning when I checked the site recorded over 2200+ unique visits, even though Jetpack recorded 165. That’s a pretty big discrepancy. 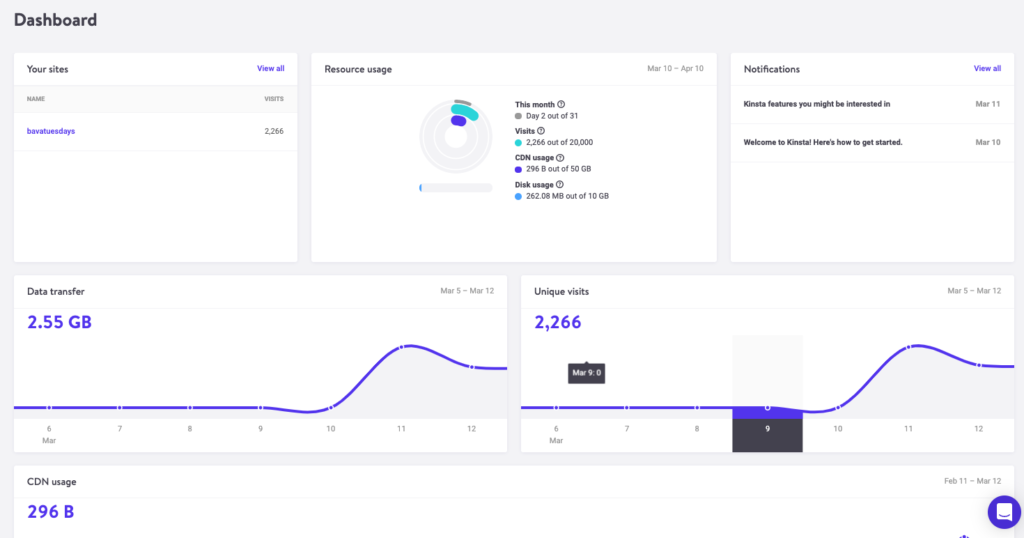 What’s more I was transferring 2.5 GB of data in less than a day? Who knew?! At this rate I will hit my 20K visits limit in less than 10 days (versus the 30 I am allotted) bumping it up to $60 per month for 40,000 unique visits—and at this rate I would even hit more than that, pushing me into the $100 Business plan range. Yowzers! I was interested in where all the traffic was coming from, and it is bizarre, as you can imagine. All I can say to all you traffic hounds out there is make more GIFs! 🙂 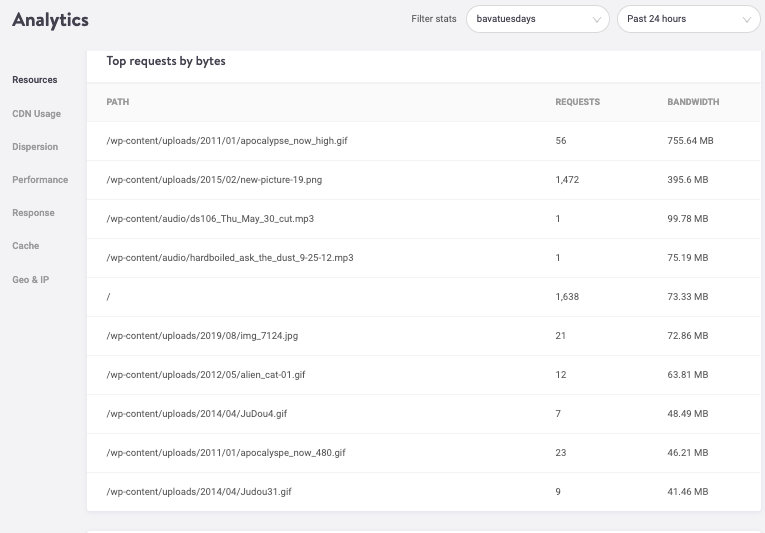 My high-res Apocalypse Now GIF from 2011 was hit 56 times and required a whopping 755 MB of bandwidth.

God the bava is unsustainable! But even more surprising is the following image of the Baltimore Police Department putting guns and money on the table being hit over 1400 times in less than 24 hours! WTF! wire106 #4life 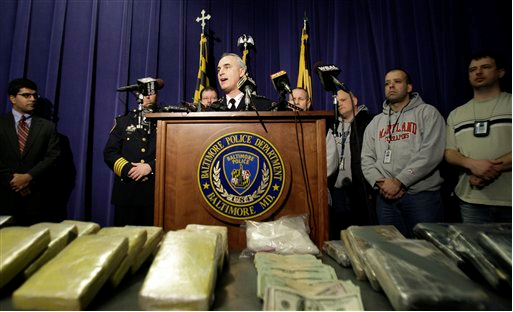 It is a strange world, but getting these insights from Kinsta’s analytics is kinda cool, and it reminds me that the bava is its own repository of weirdness outside the social media silos—“ah! how cheerfully we consign ourselves to perdition!” I still have to get my SSH keys set, which I discovered is possible…

Oh yeah, one more thing. I was also concerned about hitting my storage limits given my plan limits me to 10 GB, and when I did a df -h it looked like I was using 13GBs.

I jumped on support again, this time with Salvador, and he also ruled—their support is super solid, which is always a good sign. He gave me a different command to run in www, namely…

Which gave me what I needed, 9.2 GBs, just under the wire: 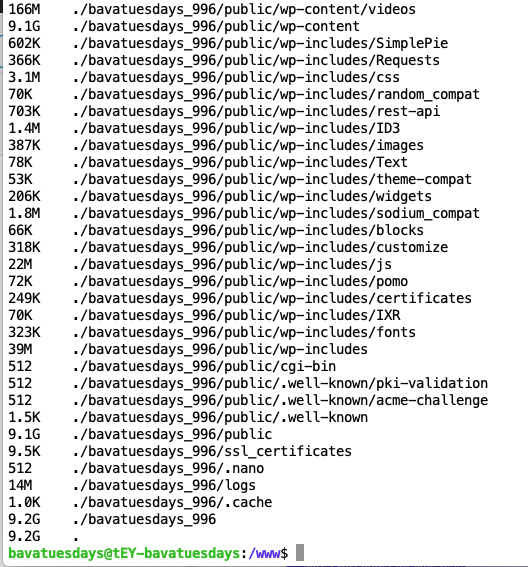 And now I need to find a way to offload some of the media serving given it will quickly make Kinsta prohibitive in terms of costs, but I have thoroughly enjoyed their dashboard, and the laser-like focus of  creating an entire hosted, optimized experience  and environment for one tool.

*Kinsta uses Intercom for online chat support, which is a tool Reclaim had for about a year or two in 2015 and 2016 I believe. We did chat support when it was Tim, myself, and Lauren, that was our team! It was hard, and the chat format invited folks to add 3 word issues like “My site broke” or “HELP me please!” Just the thing every support agent wants to see 🙂 I was mindful of this and tried to be kind and give details and be patient, but the on-demand model can be rough. And I know folks are thinking of that as one way to imagine managing stuff online in times of crisis, but if Reclaim’s experience with chat is at all telling, resist the urge!  That said, Ruby and Salvador were there and helped and I appreciated it tremendously, so who knows. But my gut tells me if you have not done web hosting support for the last 10 years and are not prepared with definitive questions and have done your own troubleshooting you are in for a world of back-and-forth pain

1 Response to Bava moves to Kinsta, story at 11