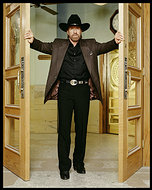 I have no idea why Chuck Norris has become a cult hero – but I recently read an article in the Washington Post that outlines the current twenty-something generations’ fascination with Chuck Norris (personally, I think he is the most pathetic excuse for an action hero since Fred Ward in Remo Williams).

After finishing the article, I pushed this apotheosis of “Walker” out of my psyche and tried to cleanse myself of chic ironic positioning I don’t understand. But all to no avail, for my friend Zach just sent me the following link to the Chuck Norris Facts website. And while I can’t come to terms with Chuck’s new found celebrity (he’s come a long way from riding tandem with Christie Brinkly during an infomercial), I have to admit that this page is hysterical, and if I were not so attached to my disgust for Chuck I would probably see that this is part of the fun.

Here’s a couple of morsels:

I just hope his cult status doesn’t garner him any undue respect!

1 Response to What the Chuck?