Cleaning Up My #ds106radio Game

Spinning some tunes and testing some shortcut keys on #ds106radio to nail down my workflow, I mean its only been like 10 years doing this…https://t.co/DQNyRE6sLp Also, getting the tubes warmed up for a chock full Sunday of specials

I have had a lot of fun playing with #ds106radio over the years, and as lockdown descended upon most of us this past Spring the radio became a refuge. I’ve pretty much got my live broadcasting setup dialed in using Audio Hijack and we’ve overhauled the station to run on Azuracast, so things are good. But listening back to the Fontaines D.C. #vinylcast, I realized how much I click my mouse during any given show, specifically to mute my microphone.

Happy to oblige, and if you hear a mouse click during this broadcast call me out, I am trying to break the habit 🙂 #ds106radio

Turns out muting your microphone using keyboard shortcuts on a Mac is not nearly as easy as it should be. I found myself in Automator trying to create a custom application to automatically mute the microphone, but my ineptitude allowed me to quickly avoid that rabbit hole. I then found a $5  application called Mutify that does this one thing. Ridiculous, but disco! The $5 is worth the cost of not getting lost in AppleScript. So, I tested the trial version. Turns out I have two audio inputs (the Audio Technica turntable and Cam Link 4K DSLR) that do not have drivers so when I hit the appropriate shortcut keys (shift+Command+0) I get a pop-up error message that require a mouse click-through ….twice! The one thing I was trying to avoid on-air, namely using the Magic Mouse with its loud-ass click,  was necessary not once, but twice. The cruel irony.

I played a bit more with the setup, and turns out if I run the Cam Link through a USB-C cable directly into the Macbook Pro the error message disappears (no idea why) so I was down to one error message from the turntable. As it happens if seems if Mutify (or my Mac) has only one error it does mute the mic and you can click through after the mic is muted avoiding the dreaded on-air click. This kludgy workaround gives you some sense how much time I wasted on this, I should have learned AppleScript after all. I tested this out on ds106radio on Sunday afternoon in anticipation of the Sunday Special show so I might get a listener or two for once.

The show does have a couple of clicks early on, but I settled in and it was pretty seamless after that. I did make a mistake playing the song “Manic Depressive” by Courtney Barrett assuming it was Courtney Barnett, so that’s on me.  The remaining issue with muting via keyboard shortcuts is it takes, on average, about 3 seconds for me to get the next song to play after cutting away from talking. Still need to make that more seamless, but not sure how—so any and all recommendations are welcome. 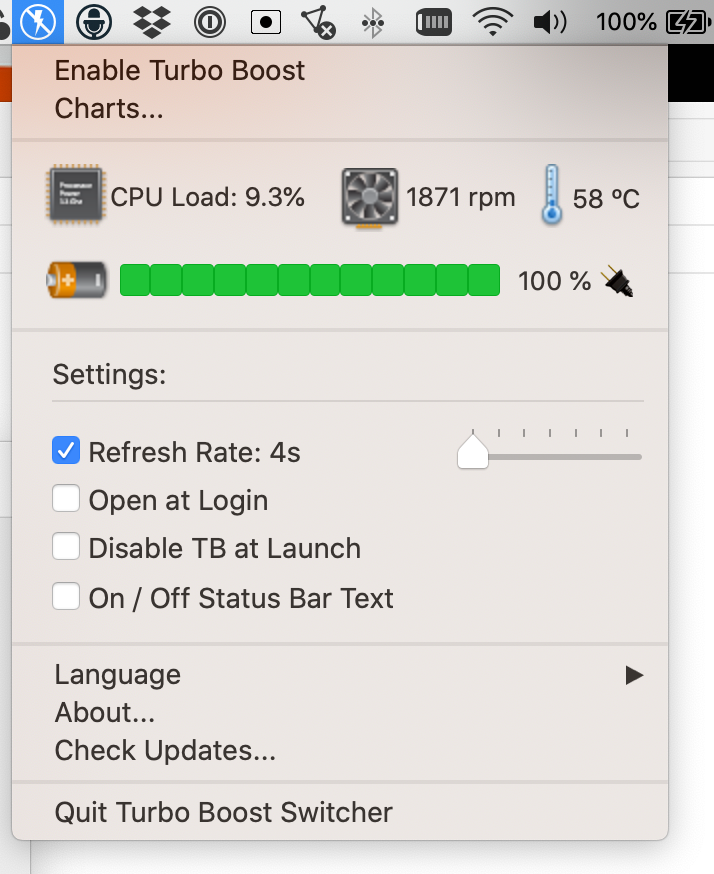 And while I am talking about trying to make the radio broadcasts more seamless, something a did a while back that has worked well is to use an application called Turbo Boost Switcher for my beefy Macbook Pro that effectively dials down how many resources the laptop uses in order to prevent the fan from turning on. I have a pretty beefy 16″ laptop with some serious horsepower, arguably too much for a laptop to cool cleanly. For example, if I have the lid open and use the built-in camera for a video call the fan starts to kick in quite loudly almost immediately—and without fail. Same is true when running Audio Hijack, OBS, or just about any other remotely intensive app. I found using an external webcam, keeping my laptop lid closed, and using Turbo Boost Switcher to disable the CPU boost I could prevent the fan from coming on most times, an issue that drove me even crazier than the clicks.

Anyway, slouching towards good radio is quite a chore, but it’s an opening for a hack like me when the best lack all conviction.

1 Response to Cleaning Up My #ds106radio Game