You can blame Brian Lamb for this post, he encouraged me to go for the trifecta. My last two posts were about 1) the possibilities public university publishing platforms offer institutions of higher ed to align their mission with the web, and 2) (if you can look beyond the nudie bombs and GIFs long enough 🙂 ) how communities like Tumblr can be amazing open educational resources. So, for the third and final installment of this unplanned and rather haphazard series, I want to talk about an emerging trend at UMW that has me pretty excited: course domains. 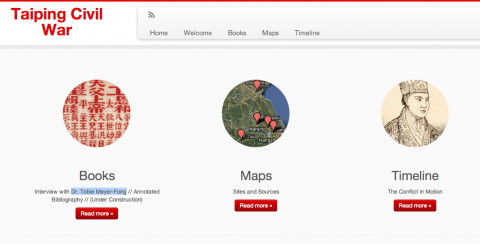 Although, to be honest, this post has in many ways already been written by Ryan Brazell. In “Mapping the Taiping Civil War” he lays out the amazing work he is doing alongside History professor Sue Fernsebner (speaking of educational Tumblrs!) and her students for the re-imagined research methods course she’s teaching this semester focusing on the Taiping Rebellion. In short, they have gotten a domain for the course (http://taipingcivilwar.org), and as a class are working together to build a really impressive series of resources on the Taiping Civil War. They’re building a dynamic map of the civil war, a timeline, and a student-conducted interview with Chinese scholar Dr. Tobie Meyer-Fong about her recent book  on the topic “What Remains: Coming to Terms with Civil War in 19th Century China.”

Think about it, fifteen newly decalred history majors drilling into a focused topic alongside a faculty member who’s guiding them in the collaborative construction of an intellectual resource designed specifcially for the web. As a part of this process they’re learning about the power of mapping for reading the past, the importance of annotated chronological resources, and how to interview top scholars in the field on their latest research. What’s more, it’s happening on the open web. And all because a professor simply said, “Why not?” Why can’t UMW undergrads do this? Why can’t we work together to build a resource for a broader public rather than remain a slave to the individually produced research papers that two people will ever read? Why can’t a course have a domain that becomes the ongoing record of the thinking about a topic that anyone can access? It reminds me a lot of the amazing work Jon Beasely-Murray has been with his students on Wikipedia since 2009.

I have to believe the work we’ve been doing with UMW Blogs since 2007 has made the move towards independent course domains a realtively seamless progression. Faculty like Sue Fernsebner have used UMW Blogs extensively over the last six years, and their comfort level with this space affords them an intimate understanding of it’s possibilities and limitations. And while not all courses need their own domain, a course that wants to experiment with various open source applications besides WordPress (i.e. Omeka, MediaWIki, DOCuWiki, Drupal, etc.), and at the same time become an established, onging academic resource for a broader community, a course domain is a powerful option. This is why UMW Domains (a.k.a. Domain of One’s Own)  represents a really exciting new frontier for us at DTLT that we are now in a postion to not only offer any faculty memebr, but also fully support them on their journey. That’s instructional technology, that’s developing faculty, that’s give students relevant web-absed literacies, and  that’s building a better, more open web all the while. With Domain of One’s Owen we continue to make good on our university’s mission. But let me end returning to Ryan Brazell’s post on the Taiping Civil War project, because he nails how cool this is far better than I ever could:

All of the resources created by the students are now and will remain available to the general public via TaipingCivilWar.org, the project website. We still have some work to do to clean up what’s there and to include additional resources created by the students, but you can already see the time and effort students put in to make this happen. Word has it that a major peer-reviewed journal in the field has even expressed interest in linking to the project website once it’s ready for prime-time — how cool is that?

That’s not only super cool, but that’s educational!

This entry was posted in Domain of One's Own, umw, UMW Blogs and tagged domain of one's own, dtlt, featured, Ryan Brazell, Sue Fernsebner, umwdomains. Bookmark the permalink.